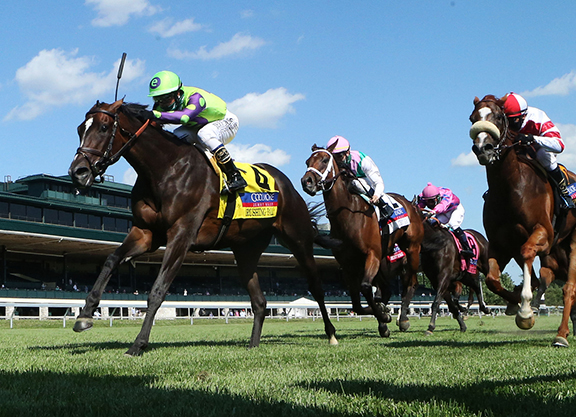 Already a Grade I winner at ages two, three and four, 'TDN Rising Star' Rushing Fall (More Than Ready) made it four straight seasons at the highest level with a record-setting victory in the GI Coolmore Jenny Wiley S. at Keeneland Saturday, which she also won last season. Away in good order, the 4-5 chalk was hot on pacesetting Jolie Olimpica (Brz)'s (Drosselmeyer) tail in second with Juliet Foxtrot (GB) (Dansili {GB}) to her inside through upbeat fractions of :23.42 and :46.94. Ranging up to look Jolie Olimpica in the eye turning for home, Rushing Fall engaged in a brief battle with her foe, but shut the door on her by mid-stretch and drew clear to win by 3/4 of a length. Her final time of 1:39.02 shattered the previous course record for a mile of 1:40.30 set by Quiet Resolve (Affirmed) in 2000.

“It's a dream come true,” said owner Bob Edwards of e Five Racing. “Everyone wishes for a horse like this. I hope I get another one in my racing career like her. This is just phenomenal. We're all sitting around watching it at the house…I'm still shaking. The adrenaline spike is still there even when you're watching from your couch. And not a terrible day for Chad [Brown]!”

Kicking off her 2019 season with a victory in this race, Rushing Fall followed suit with a win in Belmont's GI Just a Game S. last June and was second to her champion stablemate Sistercharlie (Myboycharlie {Ire}) in Saratoga's GI Diana S. Closing out last term with a fourth to another champion barnmate in Uni (GB) (More Than Ready) in this venue's GI First Lady S. in October, the bay opened this term with a wire-to-wire victory in Belmont's GIII Beaugay S. June 3.

Rushing Fall's female family has dabbled in the spotlight for many years, long before her dam, Autumnal, produced the five-time Grade I winner and 2014 SW & three-time GSP Milam (Street Sense). Autumnal's dam, Marie J, made headlines in 1997 when she sold for $1 million as a 2-year-old in training at that year's Barretts March sale and then was named after the “Marie” half of prominent owners Aaron and Marie Jones, who bred Autumnal. The latter was sold as a 2004 Keeneland September yearling for $550,000. Rushing Fall is the brightest light in the most recent branches of the family, although Marie J's half-sister did produce GISW Albert the Great (Go for Gin). Autumnal has had only two foals since Rushing Fall was born in 2015, including a full-brother to the Jenny Wiley winner born this year. Rushing Fall is one of 202 black-type winners–91 graded–for dual hemisphere super sire More Than Ready.