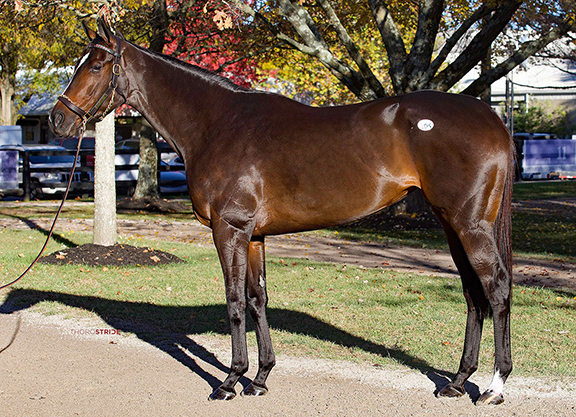 Six-time Grade I winner Rushing Fall (More Than Ready–Autumnal, by Forestry) sparked a bidding war at Newtown Paddocks Sunday night and hammered to Jamie McCalmont, agent for M.V. Magnier, for $5.5 million at Fasig-Tipton November's 'Night of the Stars'. A 'TDN Rising Star', the e Five Racing Thoroughbreds colorbearer established herself with a GI Breeders' Cup Juvenile Fillies Turf score in 2017 and added top-level conquests of the Queen Elizabeth II Challenge Cup S., Jenny Wiley S. (twice), Just A Game S. and Diana S. over the past three seasons for Chad Brown. An 11-time winner in 15 career starts, she was a close runner-up in Saturday's GI Maker's Mark Breeders' Cup Filly & Mare Turf and has banked over $2.8 million. She sold as hip 205 for consignor Indian Creek.