Rushing Fall Back to Favorite Track for Jenny Wiley Defense 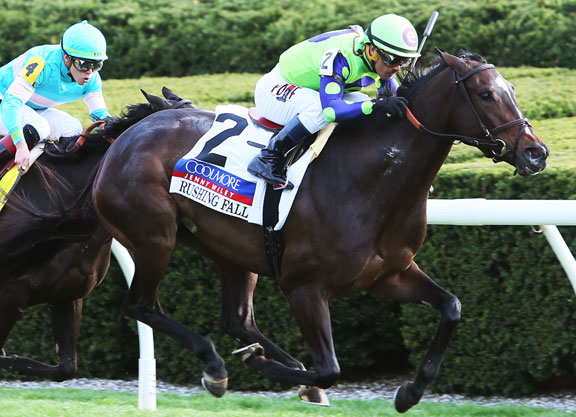 Winner of the GIII Jessamine S. at two and the GIII Applachian S. and GI QE II Challenge Cup at three, Rushing Fall controlled the pace in last year's Jenny Wiley, her one-length victory belying the ease with which it was accomplished. The $320,000 FTSAUG acquisition repeated the dose in the GI Just A Game S. last June, but found stablemates Sistercharlie (Ire) (Myboycharlie {Ire}) and Uni (GB) (More Than Ready) too tough when second and fourth, respectively, in the GI Diana S. at Saratoga and GI First Lady S. at this track. She was uncustomarily off the speed in those two losses, but atoned in no uncertain terms with a pillar-to-post tally for a second consecutive Just A Game June 3.

The very talented Jolie Olimpica (Brz) (Drosselmeyer) adds a layer of intrigue to the race. Perfect in three Brazilian starts, including a Group 1 mile over 'heavy' turf, the chestnut was sensational in winning the GIII Las Cienegas S. on her U.S. debut in January and again when besting next-out GI Jaipur S. victress Oleksandra (Aus) (Animal Kingdom) in the GII Monrovia S. at Santa Anita. In her lone try around two turns, she carried the lead into the final furlong of the GII Buena Vista S., but had no response when confronted late by Keeper Ofthe Stars (Midnight Lute). She has another 110 yards to negotiate here, but her Hall of Fame connections undoubtedly inspire confidence that she is equal to the task at hand.

Fellow California raider Toinette (Scat Daddy) ventures to the Bluegrass for the second time in her career, having handed Rushing Fall her first career defeat in the 2018 GIII Edgewood S. at Churchill. A winner of eight of her 12 career appearances, the two-time Keeneland sales graduate was easily best as the long odds-on favorite in the GII Goldikova S. on Breeders' Cup weekend last November and closed the season with a fourth to Got Stormy (Get Stormy) in the GI Matriarch S. Dec. 1. The dark bay prepped for this with a dominating victory in the GIII Wilshire S. at Santa Anita June 20 and should be in a position to capitalize if either or both of the two chalks fail to deliver their best.Rushi