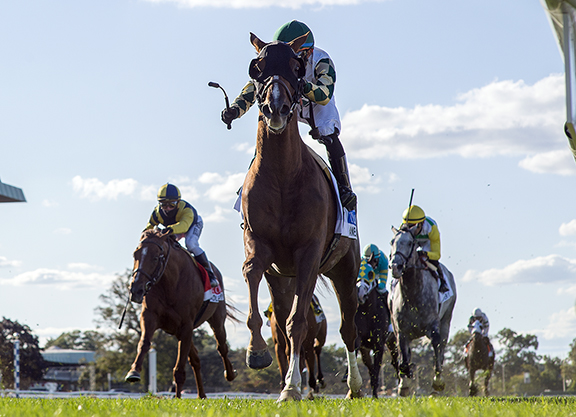 Second in the balloting for champion 2-year-old filly of her generation in 2017, 'TDN Rising Star' Rushing Fall (More Than Ready) joined the likes of former Chad Brown stablemates Lady Eli (Divine Park, 2017), Sistercharlie (Ire) (Myboycharlie {Ire}), 2018) and Uni (GB) (More Than Ready) to become the stable's fourth Eclipse Award-winning turf female in a row and second in succession for her legendary sire. To do so, she outpointed GI Breeders' Cup Turf heroine Tarnawa (Ire) (Shamardal) and Audarya (Fr) (Wootton Bassett {GB}), who defeated Rushing Fall by a neck in the GI Breeders' Cup Filly and Mare Turf.

Sportingly kept in training at five by Bob Edwards's e Five Thoroughbreds, the $320,000 Fasig-Tipton Saratoga steal got this year's delayed Belmont meet off to a rousing start, handily taking the GIIII Beaugay S. June 3 before becoming just the second horse to win consecutive runnings of the GI Coolmore Jenny Wiley S. at Keeneland. That victory made her a top-level scorer for the fourth year in a row and tied Rushing Fall with Take Charge Lady on four Keeneland stakes successes. The bay continued her winning ways in the GI Diana S. at Saratoga Aug. 23, just reeling in front-running Mean Mary (Scat Daddy) and only a letter-perfect steer Pierre-Charles Boudot atop Audarya cost her a perfect season.
Rushing Fall made the short drive from Keeneland to Fasig-Tipton for the 2020 Night of the Stars sale and sold for $5.5 million to Jamie McCalmont, agent for M.V. Magnier, from the Indian Creek draft. Rushing Fall is set to be covered by Galileo (Ire) in 2021.

It's not how you start. It's how you finish.

After a lackluster first half of 2020, Channel Maker (English Channel) ended the year in career form, posting back-to-back Grade I victories and a strong third–beaten only a length–in the GI Breeders' Cup Turf Nov. 7, good for three straight Beyer Speed Figures of 108 and the trophy for champion male turf horse.
Off the board in his first four starts of the season, including a fourth-place finish in the GI Manhattan S. July 4, he crossed the wire fourth once again in the GII Bowling Green S. Aug. 1, and was moved up to third via disqualification.

The chestnut continued his affinity for a soft going with a powerful, front-running score in the GI Sword Dancer S. at Saratoga Aug. 29, then added his second career victory in Belmont's GI Joe Hirsch Turf Classic S. Oct. 3, this time over firm turf.

He gave his backers a good run for their money at odds of 9-1 in the Championships at Keeneland, gamely leading the field of 10 into the final furlong after enjoying a clear advantage into the stretch. He just got nosed out for second by the classy, globe-trotting MG1SW Magical (Ire) (Galileo {Ire}).

Adam Wachtel and Gary Barber purchased Channel Maker privately as a 2-year-old prior to the 2016 GI Breeders' Cup Juvenile Turf. R.A. Hill Stable and Reeves Thoroughbred Racing later joined the ownership line in the fall of 2018.

Channel Maker, Canada's champion 3-year-old colt and a full-brother to fellow Canadian champion Johnny Bear, has remained in training at Mott's Payson Park base for a 7-year-old campaign and is being aimed at the $1-million Middle Distance Turf Cup on the Saudi Cup undercard Feb. 20.