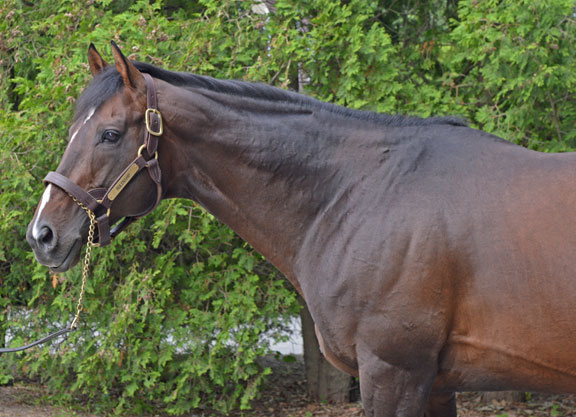 While Shadai's perennial champion sire Deep Impact (Jpn) dominated proceedings last week at the Select Sale, it was Shadai young guns Rulership (Jpn) and Lord Kanaloa (Jpn), both sons of King Kamehameha (Jpn), who got their chances to shine on Tuesday. Rulership, who is making a good impression with his first runners this year, sired two of the top three lots, including the sale-topping colt (lot 46) hammered down to Gaen Kogyo Company Limited for ¥54,000,000 (US$509,002). Tusaka Soga also picked up a Rulership colt (lot 24), a half-brother to dual Group 3 winner Shoryu Moon (Jpn) (King Kamehameha {Jpn}), for ¥42,120,000 (US$397,021). Rulership was the sale's leading sire by aggregate (eight sold of nine offered for ¥227,880,000) and average with two or more sold (¥28,485,000).

Prominent American sire Hard Spun is represented by yearlings this year from his lone season standing at Darley Japan and one of those (lot 118) was picked up on Tuesday by Hajime Satomi, who signed for some of the priciest offerings at the Select Sale, for ¥42,120,000 (US$397,014). The chestnut is a half-brother to two stakes-placed winners.