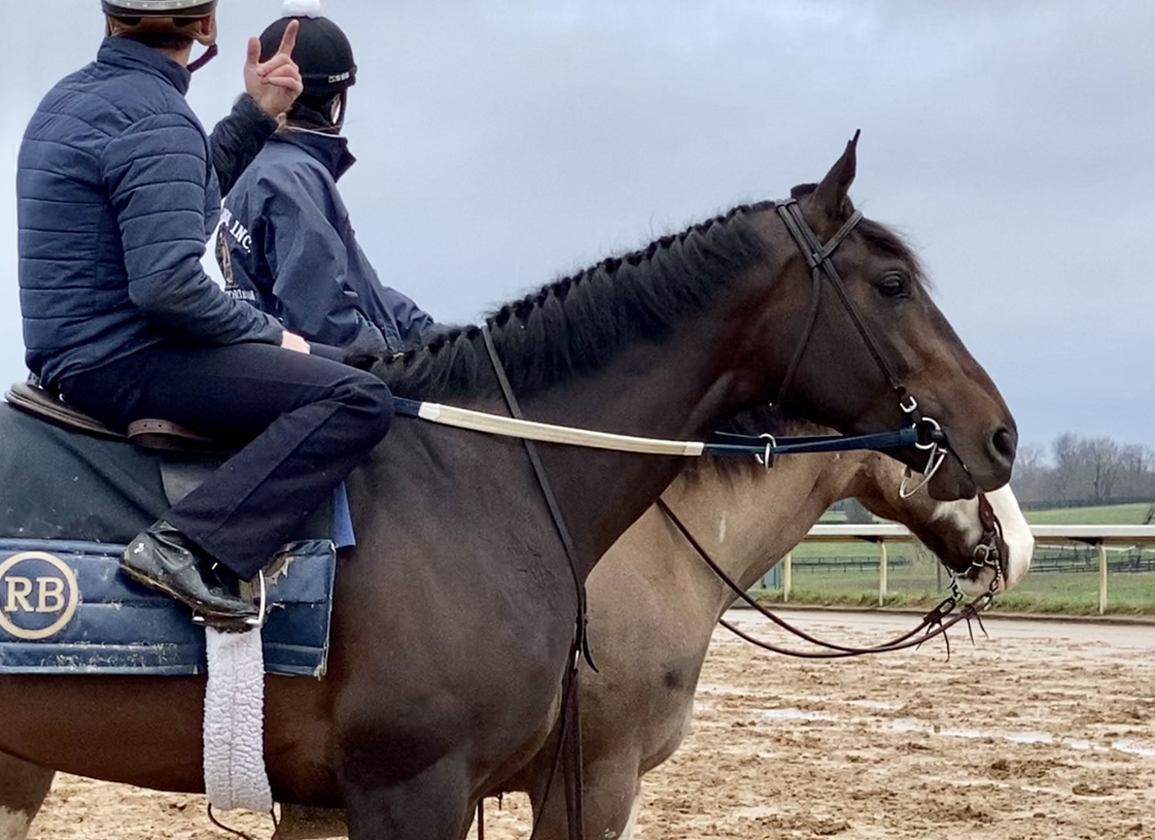 Rodolphe Brisset has been training on his own for just five years, but he has already come close to what many dream of in starting a horse in the Kentucky Derby and Kentucky Oaks. First he trained Quip (Distorted Humor), the 2018 GII Tampa Bay Derby winner who was pulled from Kentucky Derby contention a few weeks out from the race. Then the next year GII Demoiselle S. winner Positive Spirit (Pioneerof the Nile) clipped heels and fell at the start of the Kentucky Oaks, walking away relatively unscathed but leaving her connections wondering what could have been.

Brisset is due for his share of good luck as Derby week approaches and this spring he could be holding his best hand yet with GIII Fantasy S. winner Yuugiri (Shackleford) training for a probable start in the Kentucky Oaks and Blackadder (Quality Road) preparing for this weekend's GI Blue Grass S.

Three weeks ago Blackadder, who is owned by the partnership that includes SF Racing LLC, Starlight Racing, Madaket Stables LLC, Siena Farm LLC and Golconda Stable, transferred to Brisset from Bob Baffert's barn while Baffert serves a suspension ordered by the Kentucky Horse Racing Commission. So far, Brisset is happy with what he sees from the sophomore son of Quality Road.

“We have been able to breeze him twice and he's doing pretty good,” Brisset said. “He is averaged-sized and a pretty stocky horse, but a nice mover. We are happy with the way he is coming up to the race.”

Asked about the difficulties in taking on a horse mid-way through a campaign, Brisset said the situation depends on the horse.

“For him, the transition was pretty easy,” he said. “He's a very easy horse to be around, so we didn't have to overthink it too much. It's more about how they develop and change. With colts, from December to March is usually where they start to change from 2-year-olds to 3-year-olds. That's what you want to see.”

A $620,000 Keeneland September purchase bred by Stone Farm, Blackadder was third to 'TDN Rising Star' Messier (Empire Maker) on debut and broke slow in his second start to finish fifth, but put the pieces together to win his third start, a one-mile, off-the-turf contest last December at Santa Anita. In his sophomore debut, the colt won with a late rally in the El Camino Real Derby. 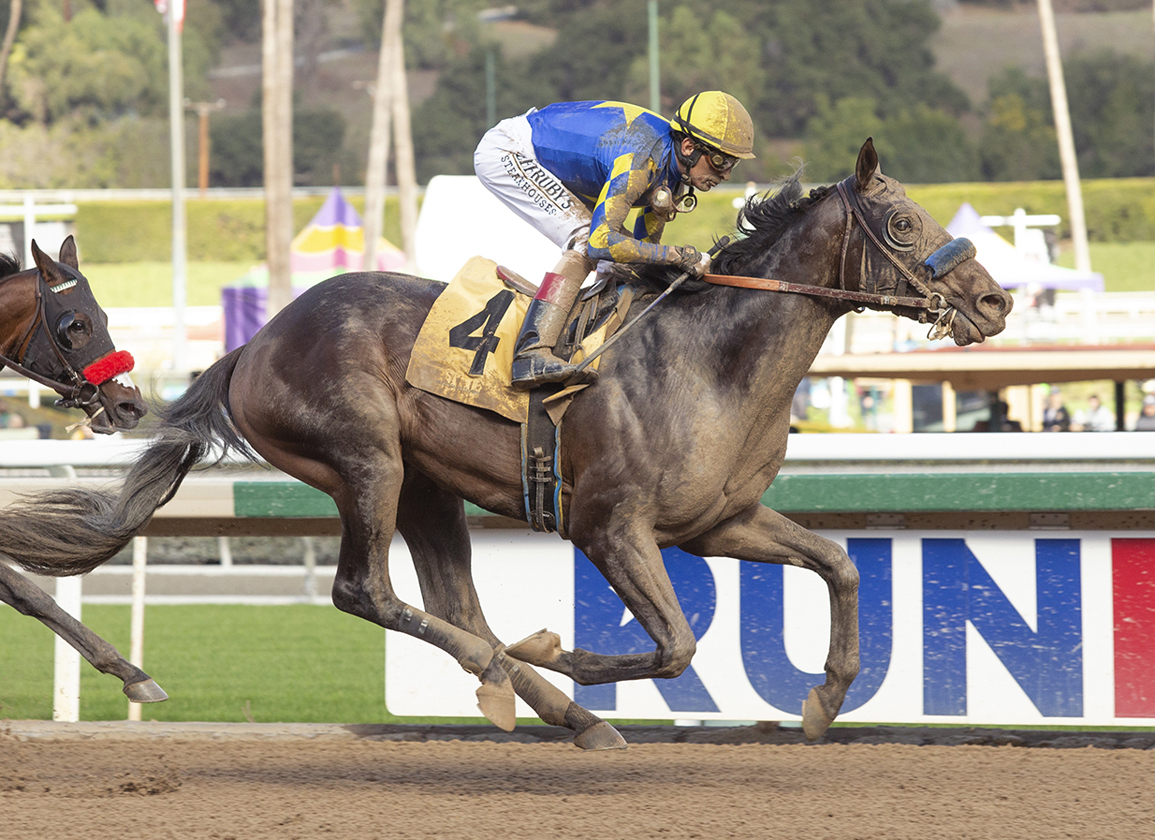 When Blackadder first transferred to Brisset, his connections were initially favoring the GIII Jeff Ruby S. for the colt's next start. But after drawing an outside post at Turfway Park, they opted for the GI Blue Grass. Unfortunately, they drew the 11 post of 12 starters on Saturday, but Brisset is still content with their decision to stay at Keeneland.

“I do think the composition of the race is a little bit different,” he said. “It looks like all the speed is on the inside of us. Also, this ownership we train for is looking to win a Grade I with this colt and is trying to make stallions, so it was an easy decision.”

Brisset is still riding a high from last weekend at Oaklawn Park. While the GI Arkansas Derby didn't pan out as hoped for his promising colt We The People (Constitution), everything went right for his other trainee Yuugiri. After placing in her first two graded starts in the GII Golden Rod S. and GIII Honeybee S., the Shackleford filly made it to the winner's circle for the GIII Fantasy S.

“She came out of the race in pretty good shape,” Brisset said. “It was a long battle in the stretch but she dug in really hard and we're proud of her. It looked like she has matured. After the Honeybee, we really saw a difference where she got bigger, she was eating even more and training well.”

“I'm always pretty conservative, but obviously the ownership wants to take a shot at the Oaks and it makes sense to try,” her trainer said. “She showed a lot of heart so we are going to keep her at Keeneland for two weeks and then maybe switch to Churchill.”

Brisset has a intimate knowledge of the inner workings of his stable's trainees as he makes it a habit of riding his own horses every morning.

“It may be a little advantageous for me, but I don't think it makes a huge difference,” he said when asked if this practice was beneficial to his training abilities. “I just don't see myself on the ground. I've been riding since I was five, so maybe it's me being selfish and wanting to be on the horse myself. At the same time, I guess I can use all the experience I've gotten from it over the years. When you know the feeling of a good one, you try to find another one with the same feeling.”

Brisset has been around plenty of good horses over the years. He came to the U.S. in 2005 after being invited by Patrick Biancone and fellow Frenchman–and now close friend–Julien Leparoux. He worked for Biancone for two years and then moved to Bill Mott's barn. He assisted the Hall of Fame trainer for 12 years before taking the plunge to open up his own stable in 2017.

Brisset has accomplished much already after five years of training, but with a focus on bringing in well-bred talent, there is certainly more to come.

“We try to maximize to get the best group of horses we can,” Brisset said. “We try to get quality over quantity. We're lucky enough to have some good ones behind us now. It's been working and hopefully we keep doing that.”