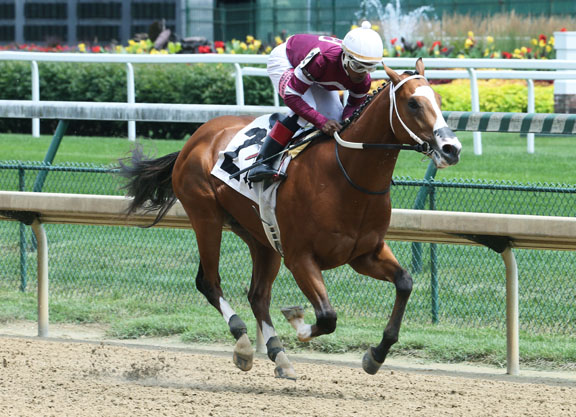 Sam and Jo Pollock purchased their foundation mare Michele Royale (Groovy) some 20 years ago now and saw the family's success extend into a third generation when Bano Solo (Goldencents) debuted with impressive victory (video) at Churchill Downs Saturday. The couple hopes the success continues into the sales ring when they offer a half-brother to that 'TDN Rising Star' through the Taylor Made Sales Agency consignment at the Fasig-Tipton July Selected Yearlings Sale. The colt, by first-crop sire Carpe Diem, is catalogued to the July sale as hip 38.

When the Pollocks, along with Taylor Made's Frank Taylor, purchased Michele Royale for $160,000 at the 1998 Keeneland November sale, the 6-year-old mare was in foal to then-first-crop sire Unbridled's Song. The investment paid quick dividends when the mare's foal sold for $1.4 million at the 2000 Fasig-Tipton Saratoga sale. But the seven-figure fireworks almost didn't happen.

“When we took that colt to Saratoga, a man came up to me and offered me $300,000 for that colt,” Sam Pollock recalled. “I nearly sold him, too. But my wife told me, 'Don't you dare do that. We are going to let him go through the sale and let him bring what he will bring.' He went in the sale and he brought $1.4 million.”

Michele Royale's most accomplished runner was Royale Michele (Elusive Quality), who was a graded stakes winner in the Pollocks's colors after RNA'ing for $70,000 at the 2006 Keeneland September sale. It was another success story borne of Jo Pollock's prescience.

While carrying Royale Michele, Michele Royale colicked and was taken to Rood and Riddle Equine Hospital with a grim prognosis.

“She was still on the operating table and the [insurance] adjuster said, 'We are ready to pay the claim, put the mare down,'” Pollock said. “So I called Jo. She said, 'Don't you dare do that. You make her comfortable, but you let her die on her own. Lo and behold, I called over at Taylor Made the next day and I asked what time the mare had died. They told me she was up and eating hay. And she did not lose the baby. That baby [Royale Michele] went on to win the GII Barbara Fritchie.”

When she concluded her racing career, Royale Michele sold, in foal to Unbridled's Song, for $700,000 at the 2010 Keeneland November sale. Her first foal, Royale Paradise, RNA'd for $70,000 at the 2012 Keeneland September sale, but the Pollocks quickly struck at the opportunity to bring the filly back into the fold.

“She had a lot of talent,” Sam Pollock said of Royale Paradise. “We sent her to Ocala, but she had some kind of muscle degeneration in the left hip and so we had to take her out of training.”

Bano Solo is the unraced mare's second foal. He sold for $115,000 at the 2017 Keeneland September sale and turned heads with a quarter-mile work in :20 1/5 before selling for $400,000 to Winchell Thoroughbreds at the OBS March sale this spring.

“He was absolutely gorgeous,” Jo Pollock said of the colt. “He was probably the best of our foals that year. He was good from the day he was born.”

The couple was so impressed with what they were seeing from the family, they repurchased Royale Michele, now in foal to Super Saver, for $82,000 at last year's Keeneland November sale.

“We bought Royale Paradise first, before we bought her momma back,” Jo Pollock said. “When they put her mother in the sale, we were so thrilled with the things that they were producing in that line, we decided we would buy the mother back also. We also have another filly, who was Michele Royale's last filly, who we tried to race and she had an ankle problem, so now she is in our breeding program, too.”

Despite their faith in Bano Solo, Jo Pollock admitted they had missed his exciting debut last weekend.

“We were at the beach,” she said with a laugh. “I didn't even know he was racing. I would have loved to have watched him-but we missed it.”

She might get another chance with Royale Paradise's Carpe Diem yearling who will go through the sales ring July 10 in Lexington.

“He is probably one of the best of the yearlings we had this year,” Jo Pollock said. “I think he is going to be an outstanding individual. Taylor Made is selling him for us and a couple of people at Taylor Made thought he was our best yearling this year. They said, 'Let's sell him in July and he will be something special there.'”

The Pollocks, alone or in partnership, own some 20 broodmares.

“We used to have a farm in Alabama,” Jo Pollock said. “We would breed in Kentucky and raise them in Alabama. About 20 years ago, we decided we didn't want to go through all that anymore, so we moved them to Kentucky and we've been happy with that.”

The couple spend winters in Florida and their summers are spent at their Kentucky farm.

The couple started out on the racing side of the business several decades ago, but are now committed to breeding specifically to sell.

“My husband had a friend whose father was on the racing commission in Florida and they had mares and he was raising babies for his dad,” Jo Pollock said of the couple's early involvement in racing. “They bought a horse and went to New Orleans. They had a really good time with it. She won a few races–nothing to write home about–but it was fun. So we decided maybe we'd like to do more of that. Then Frank Taylor got us interested in buying a portion of two or three Grade I horses who won some big races for us. We've kind of been all over the place. We have a colt out in California now in training with Richard Mandella. But that's not our main thing.”

Of the transition to breeding, Jo Pollock explained, “I used to raise show dogs and I think that carried over. I like the babies. I fall in love with the babies.”

The yearling sales season kicks off with Fasig-Tipton's July sale, which will be held July 10 beginning 10 a.m. Fasig-Tipton will host its July Horses of Racing Age sale the previous day.