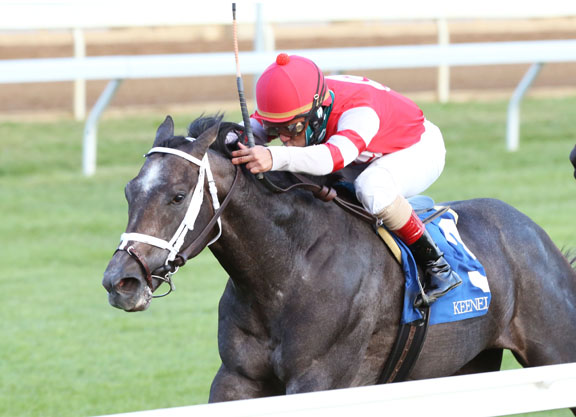 Steve Landers Racing's Royal Prince (Cairo Prince) is the 7-2 morning-line favorite in the GIII Cecil B. DeMille S. at Del Mar Sunday. The Brad Cox trainee came home first at Kentucky Downs Sept. 7, but with the gates sprung before the full field was loaded, the race was determined to be a non-wagering event. The gray colt, a half-brother to last year's champion juvenile filly British Idiom (Flashback), officially broke his maiden going 1 1/16 miles over the turf at Keeneland Oct. 2. Cutting back to a mile Sunday, the juvenile could give Cox his second graded win of the weekend at Del Mar following Arklow (Arch)'s score in Friday's GII Hollywood Turf Cup.

Also invading from the East for the holiday weekend, trainer Graham Motion sends out Madaket Stables' Wootton Asset (Fr) (Wootton Bassett {GB}). A two-time winner in his native France over the summer, the dark bay colt missed by just a nose when second in the Oct. 3 Laurel Futurity in his stateside debut. He was most recently fourth in the Oct. 31 Awad S. at Belmont Park.

Representing the home team is Legacy Ranch's Big Fish (Mr. Big), who is two-for-two over the DeMille's course and trip after a maiden score there Aug. 21 and a one-length tally in the Sept. 7 Del Mar Juvenile Turf S. He is returning to the oceanside oval after a fifth-place effort in the Oct. 4 Zuma Beach S. at Santa Anita and he turned in a bullet five-furlong work in :59 3/5 over the Del Mar course Nov. 22.