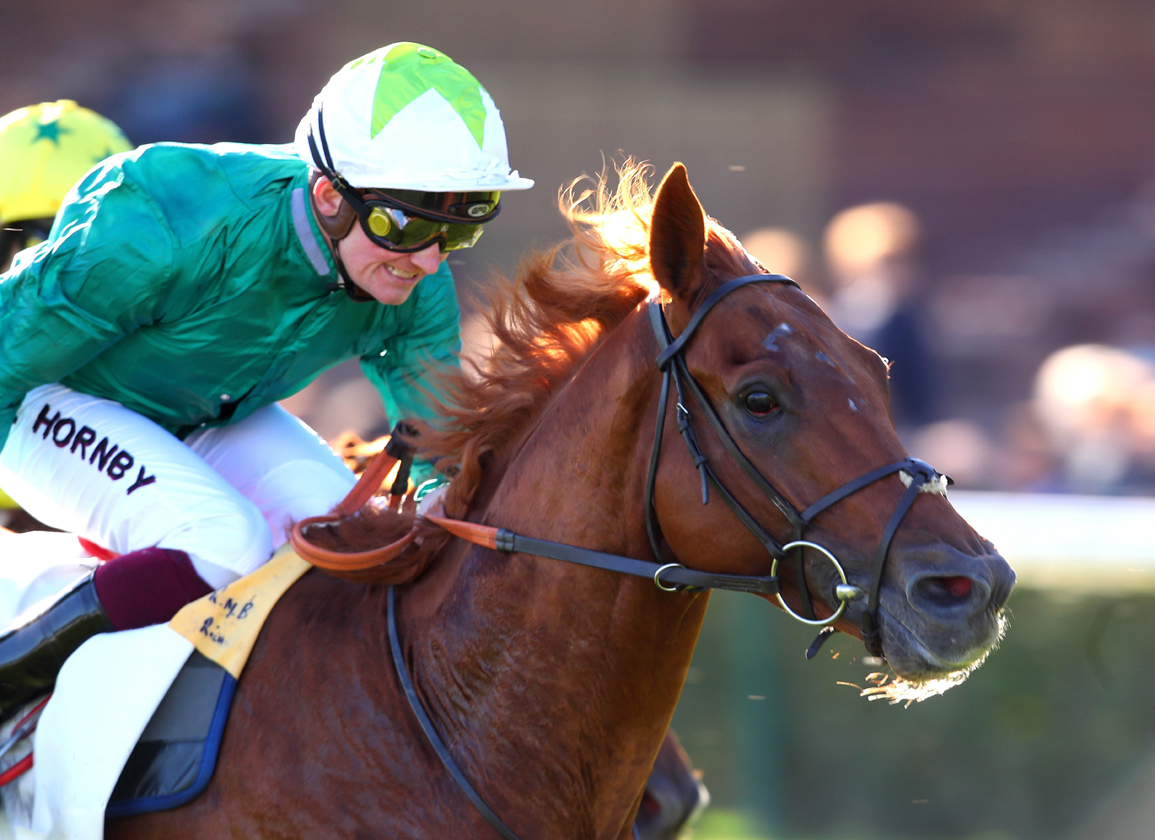 Unsurprisingly, 3-year-olds have come to assume dominance of late in ParisLongchamp's G1 Prix Royal-Oak and it was a case of more of the same on Sunday as Julian Richmond-Watson's Scope (Ire) (Teofilo {Ire}) made the eight-pound weight-for-age pull count in the testing conditions he loves. Following a staying-on sixth in the G1 St Leger at Doncaster Sept. 11 with a powerful 7 1/2-length success in Ascot's Listed Noel Murless S. also over a mile and a quarter at the start of the month, the 15-2 shot was sent up to race in third early by Rob Hornby with stamina for the 15 1/2-furlong trip guaranteed. While his acceleration was not as instant as the closer Skazino (Fr) (Kendargent {Fr}) once straightened for home, the Ralph Beckett-trained homebred was able to get to that older rival passing the furlong pole and outstay him for a length success, with Glycon (Fr) (Le Havre {Ire}) 3 1/2 lengths away in third. “He's done nothing wrong all year and stamina is the key to him,” Hornby said after steering his first group 1 winner. “I was conscious to keep tabs on the leading two so I could take it up when I wanted to, as stamina was going to be important in this ground. He powered to the line and he's a real trier. He was a touch unlucky in the Leger–he didn't get to run his race that day and maybe that was one that got left behind, so he deserved this and can go on to better things now.”

Rolling back to Newbury exactly one year and one day prior to his biggest day, Scope was getting the better of what was to become the most famous maiden in training in Mojo Star (Ire) (Sea the Stars {Ire}) on their debuts in a mile novice on heavy ground. Back in action in a 10-furlong novice on good-to-firm at Newmarket Apr. 15, the chestnut was runner-up to Godolphin's unbeaten and subsequently unsighted Al Waqidi (GB) (Dubawi {Ire}) before chasing home Third Realm (GB) (Sea the Stars {Ire}) and Adayar (Ire) (Frankel {GB}) in a renewal of the Listed Lingfield Derby Trial which was soon to take on greater significance May 8. Far from disgraced when fifth in the 12-furlong G2 Great Voltigeur at York Aug. 18, he was caught for speed and racing room at one stage in the straight but finished off strongly in the Leger before everything fell into place for a timely confidence boost in the Noel Murless.

This was again perfectly set up for the unexposed stayer whose career is not dissimilar to last year's winner and fellow son of Teofilo in Subjectivist (GB), with proven marathon man Alkuin (Ire) (Maxios {GB}) providing the target and most of the market-leaders reserved behind. It was the 4-1 favourite Skazino who threw the first punch in early straight and for a 100 metres it looked as if the G3 Prix de Barbeville, G2 Prix Vicomtesse Vigier and G2 Prix Kergorlay winner was going to write another chapter in Le Haras de la Gousserie's recent success story. Ultimately, he had reckoned without Scope's endless staying power and the British raider began to pull away as the line neared. There was to be no fairytale end to the remarkable career of Alain de Royer-Dupre, as last year's runner-up Valia (Fr) (Sea the Stars {Ire}) failed to fire after blowing the start and finished a remote sixth.

“I wasn't expecting any of this,” commented Beckett, whose Angel Bleu (Fr) (Dark Angel {Ire}) had taken the G1 Criterium International 24 hours earlier. “I thought the horse yesterday would win, but I wasn't sure about today. He has improved since Ascot and improved with racing as many of his family do. I thought today beforehand he looked terrific. I was delighted with how well he travelled and how it panned out today. He's not an exuberant horse at home and in his races and only does enough and his mother and sisters were the same. At the start of the year, I said I thought he might be more of a Leger horse rather than a Derby horse, but I didn't expect it to be the French Leger but that'll do. He was very backward throughout his 2-year-old career and is still quite a raw immature individual, so he should develop from three to four and continue to improve.”