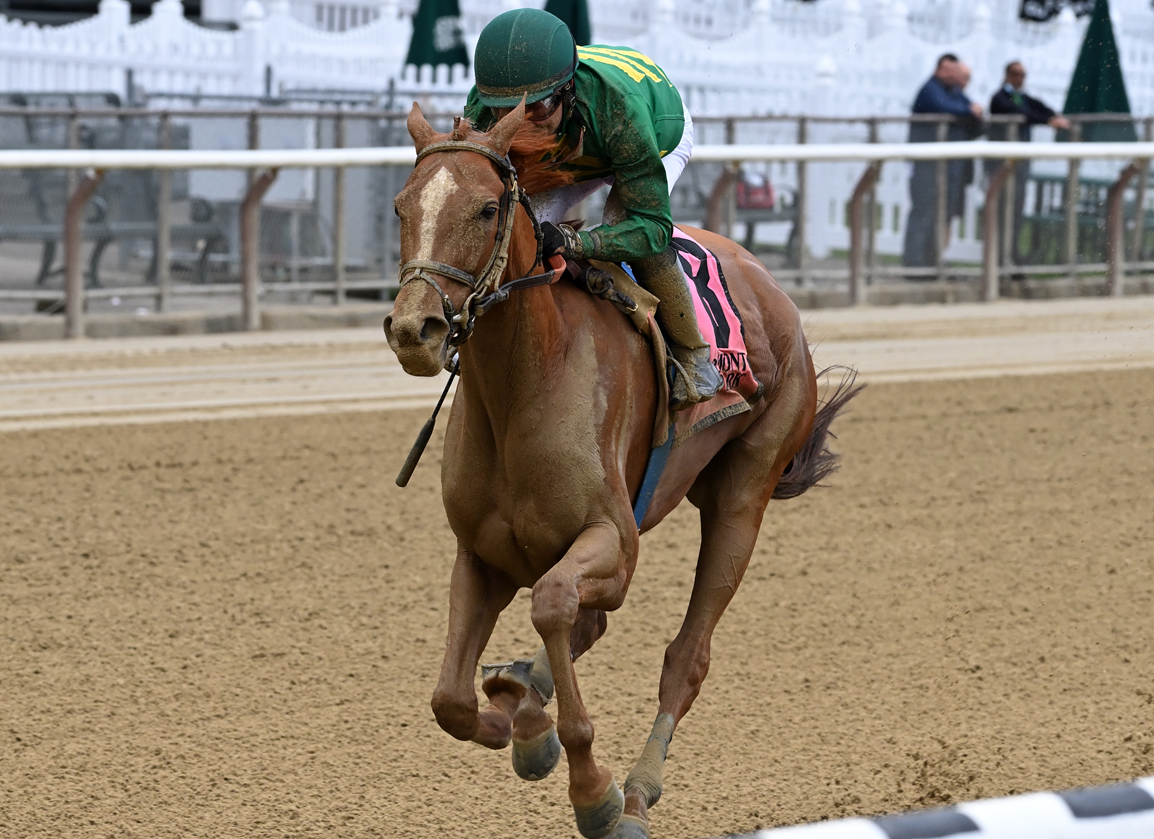 Graduating second out by eight lengths in the Aqueduct mud in December of 2019, the chestnut repeated by nine lengths in a Gulfstream allowance/optional claimer and made it three straight with a score in a similar spot last May at Churchill. Disappointing somewhat with a distant third in the GIII Molly Pitcher S., she was a close runner-up in the GIII Shuvee S. and Lady's Secret S. before breaking through with her first black-type success in the GIII Turnback the Alarm H. at the Big A. Second by a head in the GIII Baird Doubledogdare S. making her 5-year-old debut Apr. 16 at Keeneland, she flew late to capture the Shuvee July 25 at Saratoga before running a narrow third in the GI Personal Ensign S. there Aug. 28.

Pounded down to odds-on here, Royal Flag settled in fifth as second choice and 2020 Beldame heroine Horologist dictated terms through comfortable splits of :23.97 and :48.54. Creeping closer while tipping into the clear as three-quarters went up in 1:13.03, she drifted to the center of the track as heads pointed for home, swept past Horologist just inside the eighth pole and drew clear under hand urging for a much-the-best triumph. Horologist dug in to hold off pace rival Miss Marissa for second.

“She broke really well. We were up a little bit in the race today,” said winning rider Joel Rosario. “Sometimes, when there's no speed, she can be up a little bit. It looked like she was very comfortable, and we were just waiting for the time to come out and let her do her thing. I wanted to be out [wide]. When she passes horses she can hang a little bit. I feel like if I get her away from them, she's more focused at that point. So, I stayed out there. If she has another horse there [beside her], she'll just stay there.”

“This year she's obviously taken a big step forward,” added Dan Stupp, assistant to winning trainer Chad Brown. “She's trained better than ever and she's been to all of our divisions. Everyone has done a great job of developing her. She's in peak form and Rosario gets along quite well with her. I'm sure the Farishes are thrilled with her progress as well and the black type that Chad has been able to develop into her. We'll see what's next for her. Off that race, I'm sure Chad and Mr. Farish will consider the Breeders' Cup [Distaff]. We'll get her back and see how she comes out of it, and they'll come up with a plan.”

One of 100 stakes winners and 50 graded stakes winners for Lane's End 22-year-old star Candy Ride, Royal Flag is the third black-type winner out of her dam, following full-brother Eagle and half-brother Catalina Cruiser, who entered stud at Lane's End last year. Sea Gull, a $270,000 purchase by Farish at Fasig-Tipton Saratoga in 2007, has an unraced juvenile full-sister to the winner named Song of the Sea and produced a colt by Quality Road this term before being bred to Into Mischief.