Route to Japan Could Go Through Saratoga for Mongolian Groom 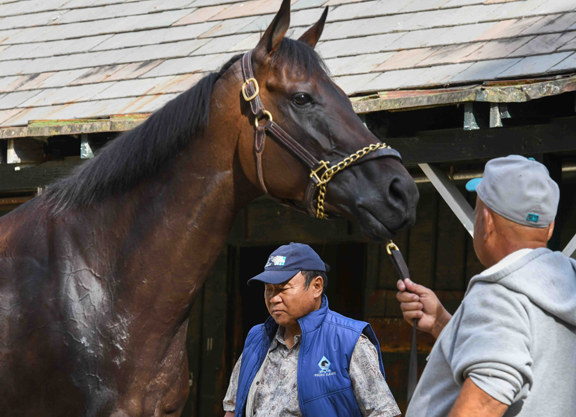 SARATOGA SPRINGS, N.Y. – With a goal of getting to Japan and a nice pay day at Chukyo Racecourse, trainer Enebish Ganbat is at Saratoga Race Course with Mongolian Groom (Hightail), for Saturday's GI Woodward S.

It's an unorthodox move to be sure, shipping to upstate New York from California, and paying a supplemental entry fee to run in an another Grade I race two weeks after his gelding finished third in the GI Pacific Classic at Del Mar. Ah, but Ganbat is not constrained by norms. He is a trailblazer, who came to America from Mongolia in 2010 to train Thoroughbreds for his friend, businessman Ganbaatar Dagvadorj. Five years later, their Mongolian Saturday won the GI Breeders' Cup Turf Sprint and the little-known Mongolian Stable was thrust into the international spotlight at Keeneland.

Though Mongolian Groom has won two of 14 career starts, he has emerged from the maiden-claiming ranks into capable black type-earning graded stakes horse in California, where Ganbat is now based. He picked up a third in the GI Santa Anita H. Apr. 6, was fourth, a length from third in the GI Gold Cup at Santa Anita, second by a length to Catalina Cruiser (Union Rags) in the July 20 GII San Diego H. and was third, a neck back of runner-up Draft Pick in the Pacific Classic Aug. 17.

Pleased with the performance at Del Mar, Ganbat said that he was stunned by what he found when he started going over Mongolian Groom the morning after the Pacific Classic.

“The horse was so fresh, strong,” Ganbat said. “He looked like he was ready to run again the next day. I started looking for good races. I didn't know this race. I was looking. 'The Woodward?  Two weeks? OK, let's go.'”

Mongolian Groom was shipped to Saratoga Sunday, has taken up residence in trainer Chad Summers's barn on the backside and has gone to the track every morning this week. He will be ridden by Luis Saez for the first time in the $750,000 Woodward.

Following Mongolian Saturday's victory in the Breeders' Cup–and the post-race celebration in traditional Mongolian garb–Ganbat and Dagvadorg raced the gelding in Hong Kong and Europe, as well as in North American. A goal for Mongolian Groom this year is the G1 Champions Cup, the 1 1/8-miles dirt race at the track near Nagoya with a projected winner's share of $869,565. Plus the Japanese Racing Association is offering bonuses to attract international runners. Should the winner of the Woodward win the Champions Cup, he would receive an additional $700,000.

Ganbat, a big, affable man with an easy laugh who left an engineering job to train horses, said it was a combination of factors that encouraged him to ship to Saratoga.

“Number 1 was that the next day after the Pacific Classic, the horse was looking great,” he said. “The second was when I saw the Woodward on this list for the Japanese race, why not try? It's a pity because when I decided, the nominations closed the day before. The nominations closed on the 17th and I made the decision on the 18th.”

That one day cost Mongolian Stable $11,250 to supplement.

Ganbat purchased the horse for $12,000 at the 2017 OBS April 2-year-old sale. It was an impulse buy, he said and had nothing to do with how the horse bred by Calumet Farm did in his public work.

“The breeze doesn't matter. I never see them,” Ganbat said. “All these babies breeze very fast. Mostly I want to see how they are moving, the conformation, the hair, eyes, everything. I liked him. That time I didn't come to the sale to buy a colt. We wanted to buy a few fillies for racing and in the future to become a broodmare. But when I saw him, I decided to buy him.”

It took some time for Ganbat to get a handle on what Mongolian Groom might be. He twice ran for $30,000 on the dirt then broke his maiden on turf. However, he has been far back in his two turf races since. Ganbat says that Mongolian Groom has improved with distance and believes that adding blinkers three races ago has helped him stay focused.

For Ganbat, the Woodward could be a step on a journey to Japan.

“We couldn't win the Santa Anita H.,” he said. “The Gold Cup we could not win. The Pacific Classic we could not win. Now we are left with this one. This is what I want. It has always been my dream to win the GI Kentucky Derby and a big race in Japan. In Japan, all the Sumo champions are Mongolians. I want to show them that trainers can do it in Japan.”