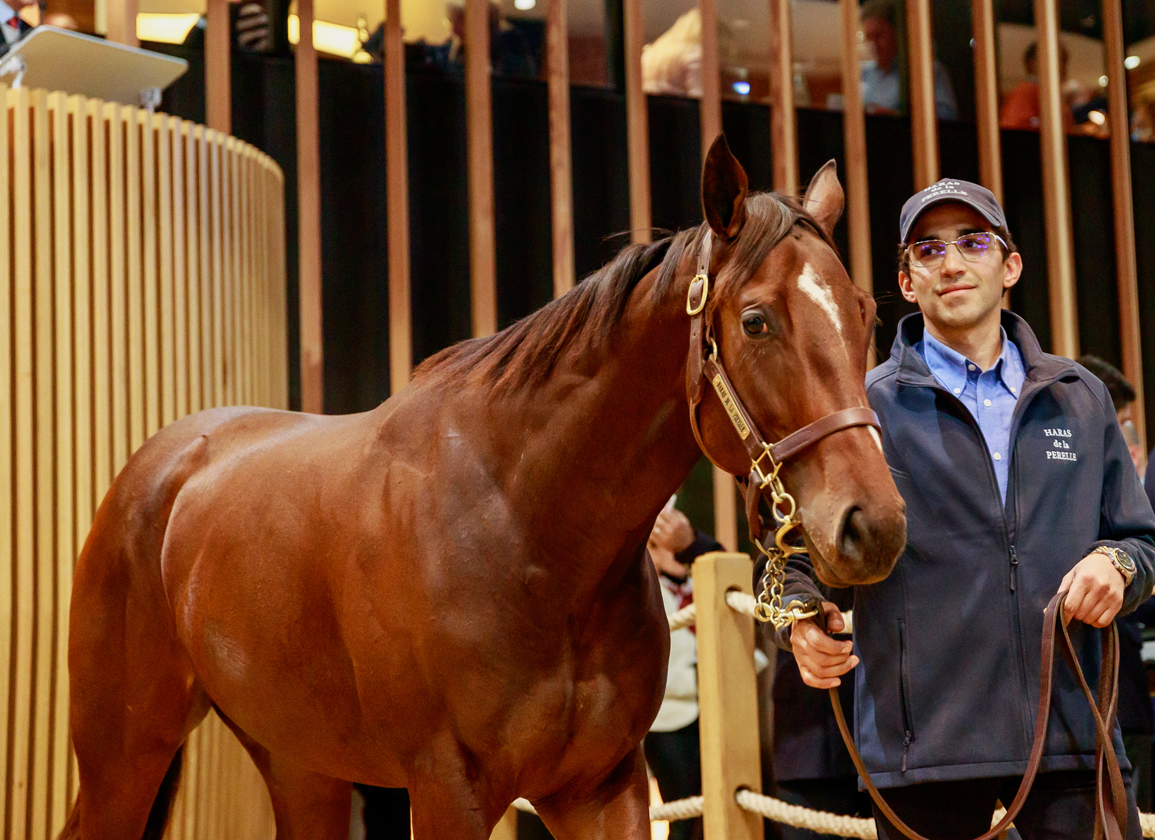 DEAUVILLE, Newmarket–By the end of the second session of the Arqana October Sale, turnover had already passed the 2020 total for all five days, and trade continued to bowl along in a similarly upbeat fashion on Wednesday with another €4,744,000 added to the overall tally which has just passed the €25-million mark. To put that in context, the current aggregate has been achieved from the sale of 424 yearlings so far this week. Last year, €18,617,000 was paid for 578 horses, and from a significantly smaller sale in 2019, €17,456,500 was accrued from 414 horses.

Across the road from the sales at the racecourse on Tuesday, Rosacea (Fr) (Soldier Hollow {Ger}) went into plenty of notebooks as a filly to follow towards next season's Classics when winning the G3 Prix des Reservoirs. Fast-forward 24 hours and it was her yearling half-sister's turn in the spotlight–in the sales ring for now, but with the aim being that she can follow her sibling in being an above-average galloper.

The former trainer was standing with Mathieu Alex of Sumbe and confirmed that the filly (lot 377) had been bought to race in partnership for Gerard Augustin-Normand and Nurlan Bizakov, the owner of Haras de Montfort, where Augustin-Normand's former Prix du Jockey Club winner Le Havre (Ire) has stood so successfully since 2010.

Now 15, Le Havre was responsible for the top-priced colt of the day, lot 396, who was bred by Rashit Shaykhutdinov and consigned on his behalf by Haras d'Ombreville. A gaggle of connections gathered in the passage to the right of the auctioneer, with the colt being knocked down at €120,000 in favour of Alain Decrion, who was standing with Nicolas de Watrigant and trainer Jerome Reynier. The latter confirmed that the son of the Group 3-placed Sage Melody (Fr) (Sageburg) had been bought for one of his principal patrons, Jean-Claude Seroul, the owner of two Group 1 winners with Reynier this year in Marianafoot (Fr) and Skalleti (Fr).

Reynier said, “He's a very athletic colt and his dam was a very good racemare. He has a lot going for him and his half-brother Millau (Fr) has just earned some black type.”

The same team later signed for a Zoffany (Ire) grandson of the GI Canadian International winner Sarah Lynx (Ire) (Montjeu {Ire}) at €70,000. Consigned by Haras de Bourgeauville as lot 406, the colt is the first foal of the listed-placed Segra (Ire) (Shamardal).

Immediately preceding the Le Havre colt's turn in the ring was a young son of Almanzor (Fr), whose first-crop runners have included the Group 3 and listed runners-up Queen Trezy (Fr) and Saving Grace (Fr) in the last two days. Lot 395, from the Haras d'Etreham stallion's second crop, was bred by Pierre Cornou, who will retain a share in the colt, who was signed for by Ghislain Bozo for €100,000.

“The breeder wanted to keep a part of the horse and so we'll put together a partnership,” Bozo said. “He will be sent into training with Edouard Monfort. He may be only of average size but he's a really good-looking colt and the family has done well recently.”

English agent Daniel Creighton stepped in late in the session to buy the Marc Bridoux-bred daughter of Shalaa (Ire) from the Haras de la Hotellerie draft for €110,000. The filly's dam Crystal War (Ire) (Declaration Of War) cut no ice on the track but as a half-sister to the St Leger winner Rule Of Law (Kingmambo) and two other black-type performers, she had plenty of residual value and her first foal (lot 521) was well received at Arqana. The family also includes Sacred Life (Fr) (Siyouni {Fr}), recent winner of the GIII Knickerbocker S. in the U.S. for Chad Brown and a grand-daughter of Rule Of Law's full-sister Katyusha.

Seabhac, a son of Scat Daddy standing at Larissa Kneip's Haras de Saint Arnoult, has his first yearlings selling this year and the leader so far at Arqana is Thierry de la Heronniere's daughter of Shimmering Sands (Fr) (Medicean {GB}), who sold to Prime Equestrian for €77,000. The filly's 2-year-old half-sister Anterselva (Fr) (Fast Company {Ire}) has won this season for Gianluca Bietolini as well as finishing runner-up in the listed Prix La Fleche.

The demand for the first yearlings of Cloth Of Stars (Ire) also continued on Wednesday, with Tina Rau and Nicolas Clement going to €76,000 for lot 454 from Haras d'Haspel. The filly's dam Vejer (Ire) (Dalakhani {Ire}) is a half-sister to young stallion and Group 1 winner Zelzal (Ire), who is bred on the same Sea The Stars (Ire)-Kingmambo cross as Cloth Of Stars. The latter's 14 yearlings sold at Arqana October have returned an average of €66,500.

There are still two days of the Arqana October Yearling Sale to go, and those who love to find a bargain can take some encouragement from the impressive debut of the Jane Chapple-Hyam-trained Claymore (Fr) (New Bay {GB}) at Newmarket–one of three juvenile winners for the Ballylinch Stud stallion on Wednesday. Bought at Arqana October last year for €5,000 by breeze-up pinhookers Mary Reynolds and Ambrose O'Mullane of Ardglas Stables, the colt then sold for £10,000 at the relocated Goresbridge Breeze-up in June.

Claymore made nearly all in the seven-furlong novice contest to post a four-length victory over the Godolphin favourite Noble Order (Ire) (Dubawi {Ire}) and is now being quoted at around 40/1 for next year's 2000 Guineas. Chapple-Hyam is also responsible for New Bay's first Group 1 winner, Saffron Beach (Ire).

Action returns to the ring at Arqana on Thursday at 2 p.m. local time.