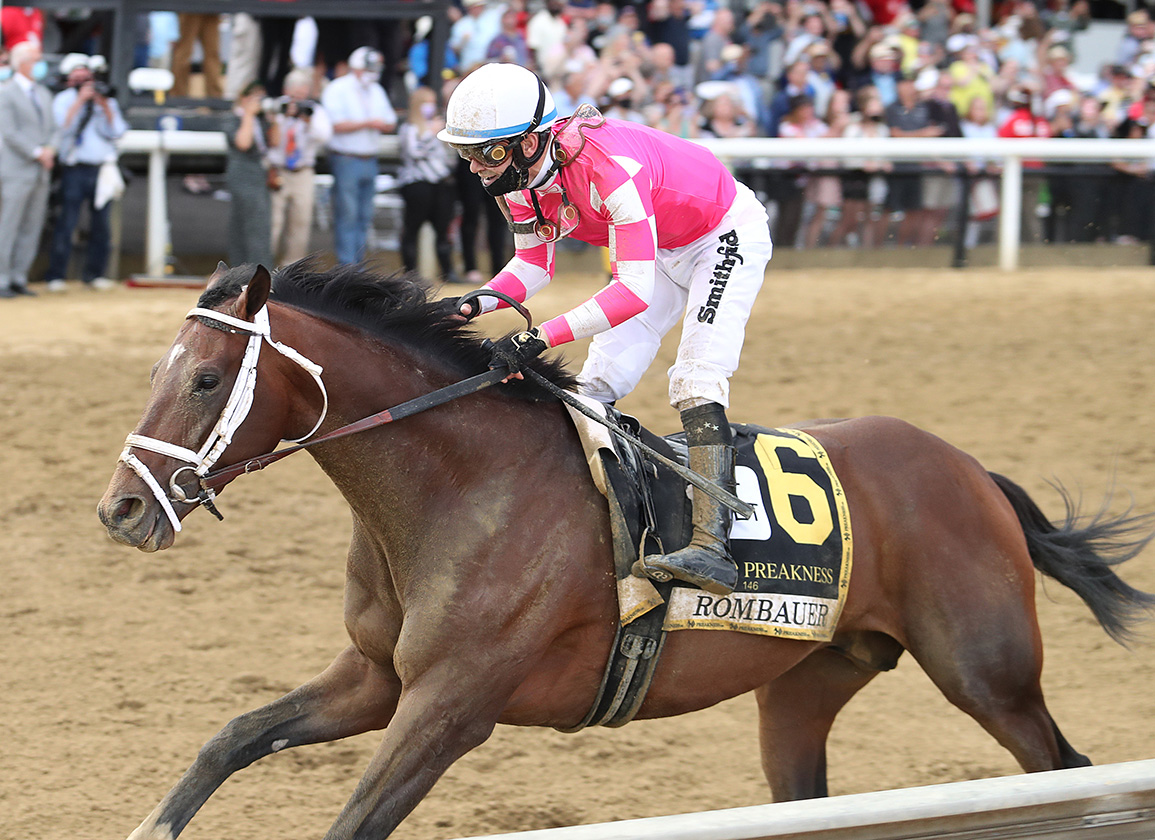 After a few hours of sleep, trainer Michael McCarthy was back at Pimlico Race Course Sunday morning, quietly talking about Rombauer (Twirling Candy)'s emphatic victory in the 146th GI Preakness S. Saturday and looking ahead to the June 5GI Belmont Stakes. Bred and raced by John and Diane Fradkin, Rombauer rallied to a convincing 3 1/2-length score Saturday and stopped the clock in 1:53.62, the eighth-fastest time since the race distance was changed to 1 3/16 miles in 1925.

While McCarthy, 50, acquired plenty of experience in Triple Crown races during his long tour as an assistant to Hall of Fame-elect trainer Todd Pletcher, Rombauer was his first starter in the series since he opened his own stable in 2014. The well-respected, low-key, California-based horseman started receiving congratulatory calls and texts as soon as the race was over.

“It's been great,” McCarthy said. “It's nice to see this all kind of come together. The horse justified what I thought of him all along.”

The Fradkins and McCarthy have decided to ship Rombauer to Belmont Park Monday and are seriously considering running him in the 1 1/2-mile Belmont.

“We will go ahead and go to Belmont,” McCarthy said. “We will get there and see how he is and where he is at and go from there.”

Elsewhere in the Preakness aftermath, Steve Asmussen, the Hall of Fame trainer of Winchell Thoroughbreds' runner-up Midnight Bourbon (Tiznow), said Sunday that the Belmont is under consideration for his trainee.

“Proud of his effort,” Asmussen said. “He had every chance yesterday and he ran second. He's a good horse who needs to continuously get better, but we have a lot of confidence that he will, pedigree-wise, and who he is physically and the fact that he has continuously improved to this point.”

Midnight Bourbon left Pimlico to van back to Churchill Downs right before dawn Sunday morning. Asked if the Belmont might be in his plans, Asmussen said, “Of course it is. All major 3-year-old races are under consideration for the rest of the year. Let's get him back to normal circumstances just to see where we're at with him. That also gives us time to see everything that's out there and knock out a plan for him for the second half of the year.”

“We will evaluate everything and Bob will see what direction he wants to go with them,” Barnes said.

Added Barnes of Medina Spirit's run, “He ran his race. The second quarter is what got us. Once they threw up that 46 [:46.93 seconds], it was a bit much. We just need to give him a little bit more time between races. Bob knows what to do and I will feed him the information and he will tell us what to do.”