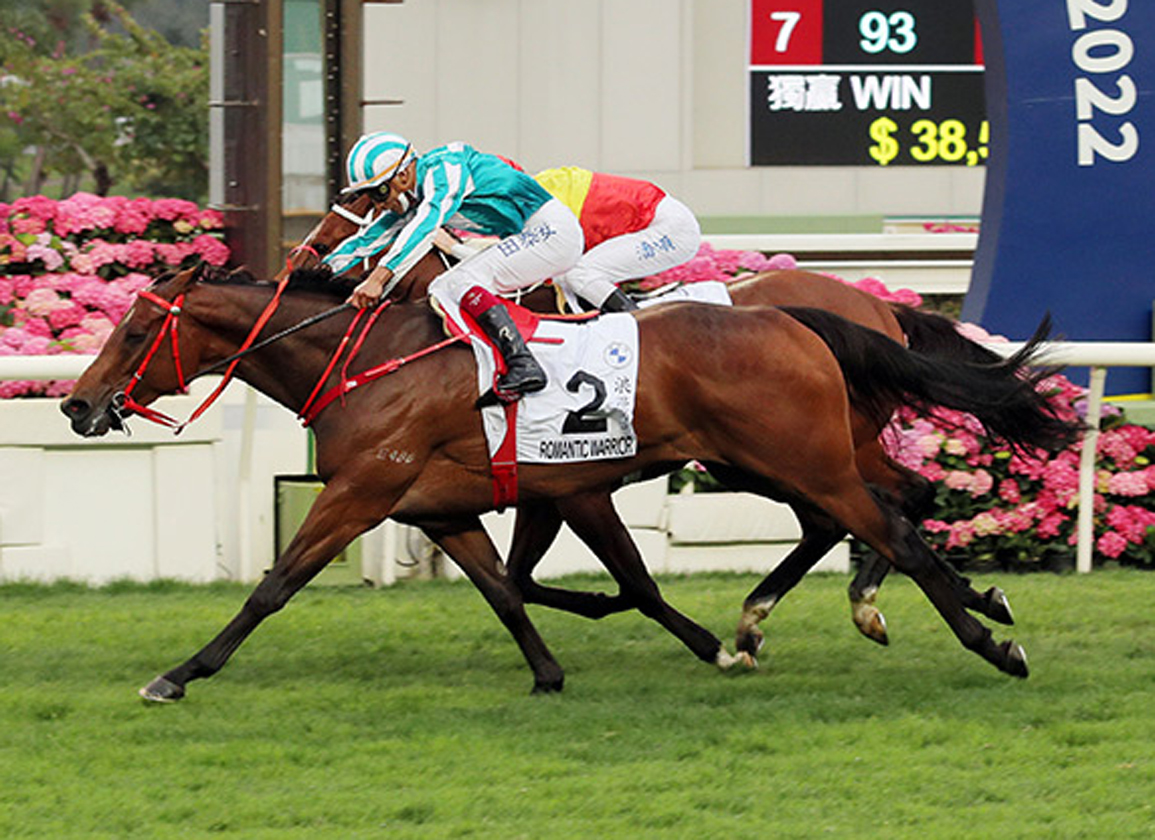 The speedy California Spangle, who was trying the metric mile and a quarter for the first time off a front-running tally in the Hong Kong Classic Cup over a furlong shorter last time, pinged the gates from stall 10 and did some work to cross down onto the fence, but settled nicely from there as they turned down the back. S J Tourbillon (Ire) (Galileo {Ire}) raced closest to the leader passing the 1200-metre point, while Money Catcher was allowed to drop in and Karis Teetan had the second-elect Romantic Warrior midfield and between horses at halfway.

Rocket Spade (Aus) (Fastnet Rock {Aus}), the 2021 G1 New Zealand Derby hero, loomed three wide outside of the pacemaker with three furlongs to race, but California Spangle was still going reasonably well and was the first to face the judge. Steered out into about the four path, the favourite was awkward for a stride or two, still in command, but Romantic Warrior was finding his best stride as he went on the attack outside of Mr Ascendancy (Ire) (The Gurkha {Ire}). Money Catcher boxed on further towards the inside, but the two Irish-breds came to settle it, with Romantic Warrior doing slightly the better work through the line. He is the first Northern Hemisphere-bred Derby winner since the aforementioned future Horse of the Year and four-times Group 1 winner Designs On Rome and is a first Derby winner for Teetan and trainer Danny Shum.

“He travelled a bit the first turn,” said the Mauritian. “I had a nice trail through until the straight and I must say I thought 'God, Zac's horse is going to be hard to get past.' This horse is a little horse, but he's got a big heart and I'm really thankful to everyone–the owner, Danny and his team.”

Shum, who saddled Playa del Puente (Ire) (Elzaam {Aus}) to a near-shocking defeat of Golden Sixty (Aus) (Medaglia d'Oro) in 2020, added: “He [Romantic Warrior] deserved to win the Derby, he is a very honest horse and very consistent. Karis did a great job, so I'm very happy. The second horse, California Spangle, also ran very good. The pace was strong and he was still fighting on the line.”

Shum said that the G1 FWD QE II Cup is next on the agenda for Romantic Warrior, a decision surely made easier given that there will be no invitees from overseas due to the pandemic. Tony Cruz will also target FWD Champions Day with California Spangle.

Romantic Warrior was purchased by the Hong Kong Jockey Club for 300,000gns from the draft of David and Henrietta Egan's Corduff Stud at Tattersalls October in 2019 by a team headed up by legendary former jockey Mick Kinane and was prepared for the 2021 Hong Kong International Sale, postponed to June by the pandemic, but for many years held on the eve of the Derby. It was the only of the sale entries that Shum recommended to owner Peter Lau, who went to HK$4.8 million (£444,729/€517,894) for the gelding.

“I would like to thank the Hong Kong Jockey Club as well for bringing this horse into the International Sale,” Shum said. “Actually, the CEO [Winfried Engelbrecht-Bresges] also said to me in the stable 'This is the right one', so we picked the same horse.

“Thank you to the owner Peter Lau for really supporting the ISG Sale. He always says, 'You can buy me a good horse, but don't buy me the wrong horse.'”

Romantic Warrior is the third foal from his dam, a daughter of Folk Opera, whose biggest racetrack success came in the 10-furlong GI E. P. Taylor S. at Woodbine and whose resume also includes a victory in the G2 Darley Prix Jean Romanet. With the Dubai World Cup meeting straight ahead, it is interesting to note that the sires of Romantic Warrior's first two dams each has a World Cup to their credit–Street Cry in 2002 and Singspiel in the weather-delayed second running of the race in 1997.