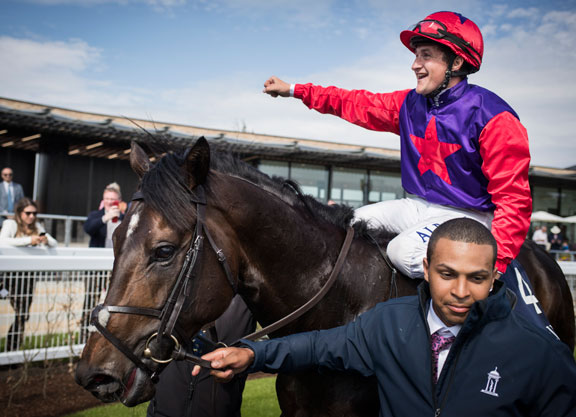 G1 Irish 2000 Guineas hero Romanised (Ire) (Holy Roman Emperor {Ire}) is headed toward Royal Ascot, where, all being well, he will contest the G1 St. James's Palace S. on June 19. The Robert Ng colourbearer signed off with a runner-up performance in the G3 Solario S. at Sandown in September before running sixth in his sophomore bow, the Listed Tetrarch S. on May 7 prior to his May 26 Classic score.

“Romanised is in great form following his victory in the Irish 2000 Guineas and has come out of the race really well,” said Co. Kildare-based trainer Ken Condon to the Goodwood notes team. “I need to talk to the owners, but Romanised delighted us at the weekend and we are thinking about running him next in the St James's Palace S. at Royal Ascot. It would be a nice race to target and it fits in really well in the calendar. After that, the [G1] Sussex S. [on Aug. 1] is the race we will consider heading for.”

Romanised is one of 46 horses nominated for Goodwood's Qatar Sussex S., part of the five-day Qatar Goodwood Festival. Saxon Warrior (Jpn) (Deep Impact {Jpn}), who won the G1 English 2000 Guineas at Newmarket in the beginning of May and Olmedo (Fr) (Declaration of War), who won the French equivalent, are also nominated to the £1-million one-mile event.

Said Condon, “The Qatar Sussex S. is a race we have on our minds at the minute. He would have to improve again but, with natural progression, you would think he can. It is not a purely speculative entry and is a race that carries great prestige. He is a horse that needs a good, strong gallop and that is something we might get at Goodwood. His Irish 2000 Guineas win was brilliant. He is a horse that isn't short of talent and he just needed it to come together in his races.”