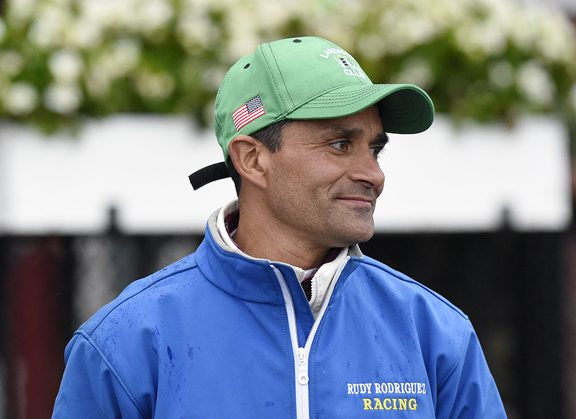 Though he says he has yet to reach a final agreement with the principals of the Zayat Stables over allegedly unpaid bills that total more than $600,000, trainer Rudy Rodriguez said Saturday that he is hopeful a deal can be worked out that satisfies all parties. Meanwhile, there is a conflicting sentiment from the Zayat camp, which claims the debt has been paid off.

“Yes, I believe so, I believe this will work out,” Rodriguez said. “He’s a big guy in the game, has horses with people all over the country and has horses in Europe. I hope everything works out good. I’m going to do everything I can to get my money. I have given him plenty of time to resolve this. It’s been going on for almost a year and I had to put a stop to it or else I couldn’t continue. What am I going to do? I have to do my best and just hope.”

In a story first reported by Daily Racing Form, it was revealed that Rodriguez planned to auction off two horses owned by the Zayat Stables, which is led by prominent owner Ahmed Zayat. The horses, Lezendary (Zensational) and Majid (Shackleford), are the only two Zayat-owned horses remaining in Rodriguez’s care and were scheduled to be sold Nov. 1. The laws in New York permit a trainer, or any caretaker of livestock, to auction the livestock in order to recoup unpaid bills by the owner.

When asked if the auction is still on and what the status of his dealings with Zayat are, Rodriguez’s lawyer, the usually loquacious Drew Mollica, declined to comment. Mollica would only confirm that he is talking to the Zayats.

“I can only say that we have been in conversation and I’m hopeful that we can reach a binding settlement,” Mollica said. “The parties have been in contact and we are in negotiations.”

“Hopefully we can get an agreement,” Rodriguez said. “Right now, the lawyer is talking to them. They haven’t said no, but I need to see some action.”

While Mollica and Rodriguez are saying that the matter has yet to be resolved, Ahmed Zayat said yesterday that is not the case.

Should the auction take place, Rodriguez would likely recoup some, but not all, of the money he alleges he is owed. Majid won the Easy Goer S. in June, but his form has been poor lately as he was beaten 14 lengths in the GIII Dwyer S. and 46 1/2 lengths in the Smarty Jones S. Lezendary has also struggled of late. A 4-year-old filly, she won the Cicada S. last year, but most recently has been beaten by a total of 44 1/2 lengths in her last three starts.

The auction of the two horses became public knowledge when Friday’s printed edition of Daily Racing Form included a notice that the two horses were to be sold by Rodriguez. The notice indicated that Rodriguez had the right to sell the horses “by virtue of default in payments.”

According to Equibase, horses owned solely by Zayat Stables have earned in excess of $57 million since 2005. On two occasions, Zayat has led the nation in earnings, in 2008 and 2015. The star of the stable in 2015 was Triple Crown winner American Pharoah (Pionerof the Nile), who earned $8,650,300. Zayat earned more money from American Pharoah when selling his breeding rights to Coolmore. Zayat Stables earned an Eclipse Award in 2015 as the nation’s leading owner.

The Zayats’ earnings have dipped considerably since American Pharoah. From 2016 through 2018, the stable earned a total of $6.2 million. This year the stable’s earnings total $1,247,806.