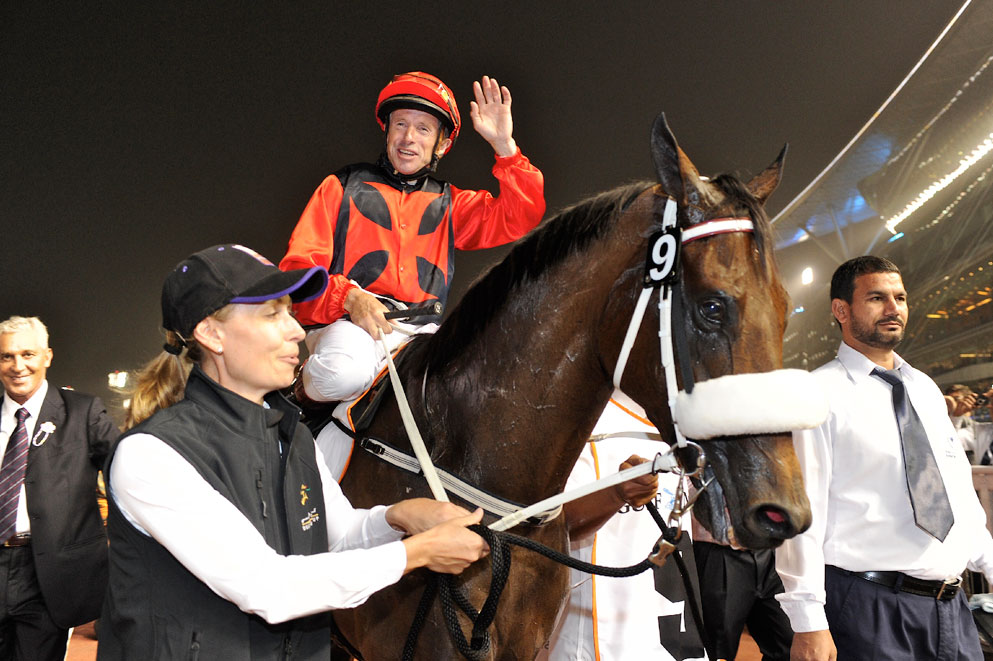 Rocket Man (Aus) (Viscount {Aus}–Macrosa {NZ}, by McGinty {NZ}), the only Singapore-based horse to win a Group 1 race on foreign soil, has officially been retired, according to a post on the Singapore Turf Club website.

Bred in New South Wales by Dean Fleming, Rocket Man raced in the colours of Fred Crabbia and was trained by Patrick Shaw and became a near-instant sensation, winning his first seven trips to the post before suffering a narrow defeat at the hands of Hong Kong champion Sacred Kingdom (Aus) (Encosta de Lago {Aus}) in the 2009 KrisFlyer International Sprint (video). Runner-up to Kinsale King (Yankee Victor) in the G1 Dubai Golden Shaheen the next winter, he was again just touched off by Hong Kong's Green Birdie (NZ) (Catbird) in the 2010 KrisFlyer and later that year, took his show to Sha Tin. It was a productive sojourn, as Rocket Man dead-heated for the win in the Jockey Club Sprint before dropping a heartbreaking decision to South African star J J the Jet Plane (SAf) (Jet Master {SAf}) in the G1 Hong Kong Sprint, with Sacred Kingdom right there in third (video).

Ever consistent, Rocket Man made history in the desert in March 2011, besting America's Euroears (Langfuhr) in the Golden Shaheen (video) and backed that effort up two starts later with a towering 4 3/4-length success in the KrisFlyer, by then an international Group 1 test. He last faced the starter in April 2012, winning the Lion City Cup–Singapore's top domestic sprint–for the fourth consecutive year, but a rash of injuries ensued. A last-ditch attempt to bring him back to the races included an easy barrier trial this past March, but time was officially called this week.