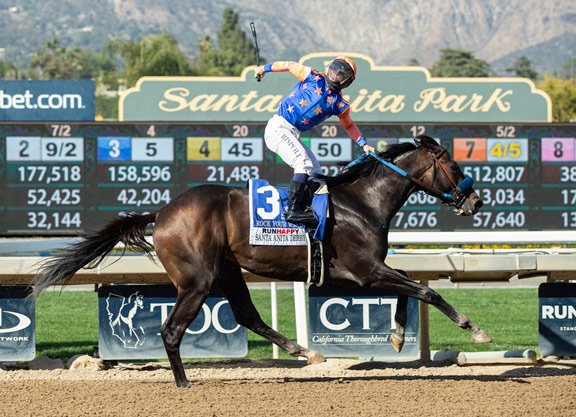 Hronis Racing and Talla Racing's Rock Your World (Candy Ride {Arg}) threw his hat in the ring for the GI Kentucky Derby with a front-running upset in his first try on dirt in Saturday's GI Runhappy Santa Anita Derby.

A debut winner sprinting on the grass at Santa Anita on New Year's Day, the $650,000 KEESEP purchase scored a decisive victory in the one-mile Pasadena S. over the local lawn Feb. 27. He prepped for this with a best-of-82 five-furlongs in :59 1/5 over the Arcadia main track Mar. 28.

Given a 5-1 chance in this step up to the big leagues, Rock Your World showed good early foot, pushing his way up between foes to seize the early advantage. The dark bay was hard-pressed by 45-1 shot Parnelli (Quality Road) with 4-5 favorite Medina Spirit (Protonico) perched on that one's outside in third through opening splits of :22.42 and :46.11. Umberto Rispoli let Rock Your World out a notch at the three-eighths pole and he readily responded, shaking free of his foes as he entered the bend. A determined Medina Spirit tried his best to reel in the pacesetter in the lane, but Rock Your World had plenty left in the tank and effortlessly rolled clear of the chalk to win for fun by 4 1/4 lengths. 'TDN Rising Star' Dream Shake (Twirling Candy) completed the trifecta.

It was the second Santa Anita Derby victory for trainer John Sadler. Coincidentally, his first also came with a son of Candy Ride, when winning the 2010 edition with Sidney's Candy.

“We have been laying in the weeds,” said Sadler, who also won Saturday's GIII Commonwealth S. at Keeneland with Flagstaff (Speightstown). “I thought it would be good to start this horse off on the turf, much like Omaha Beach (War Front), and develop. The plan was to run him a couple of times on the turf and now it was time to get the points. We gotta get the points to get to Kentucky.”

He continued, “The post [position] dictated our strategy. I saw Umberto in the paddock this morning at 8 a.m. and I told him 'Go big or go home.' We had to get out of there with the scratch inside of us. It worked out great and I'm very excited.”

“Things came together and thank God, John Sadler has done a great job, Juan Leva and Alex Bosano, everybody on the backside they made all this happen,” said Kosta Hronis. “They did a great job with the horse. We told Umberto to be aggressive, but if somebody was going to go let them go. But I think he just felt comfortable, it was just kind of the thing you had to come out and compete right off the bat and he did. He rode a great race, think he knew he had the horse to do it. We get to go to the Kentucky Derby, that's going to be a fun day. We're going to try to enjoy this for today. He's only had three starts, making his fourth start in his career in the Kentucky Derby, I guess we really have nothing to lose. Just go in there and enjoy it.”

Rock Your World is the 17th Grade I winner and 50th graded winner for the timeless Candy Ride. The Lane's End stallion is responsible for 98 black-type winners in total and also earned another graded winner as a broodmare sire earlier in the day courtesy of GIII Gazelle S. heroine Search Results (Flatter).

Juddmonte homebred Empire Maker, who died last January, continues to burnish his legacy as a sire and broodmare sire. Rock Your World is bred on the same cross as GI Frizette S. and GI Test S. heroine Separationofpowers (Candy Ride {Arg}) and GIII Hanshin Cup winner Crewman (Candy Ride {Arg}). Already one of 55 black-type winners out of a daughter of the 2003 GI Belmont S. victor, the winner is his 26th at the graded level and fifth Grade I winner as a broodmare sire.