Rock Star Rachael Is Pure Gold On A Plus Tard 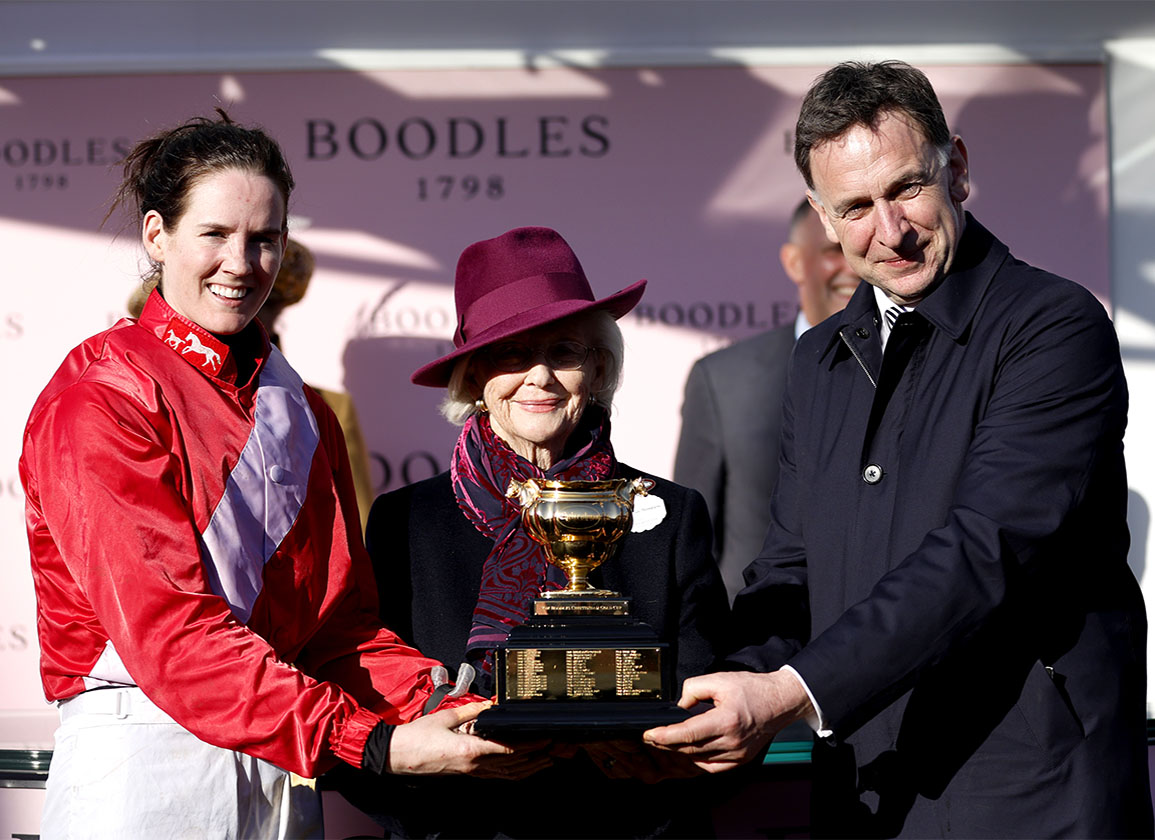 CHELTENHAM, UK–Emotions ran high at Cheltenham on Friday as Rachael Blackmore, the most successful female National Hunt jockey of all time, continued to rewrite the history books, this time by becoming the first woman to win the Cheltenham Gold Cup.

Her willing and sublimely talented partner was A Plus Tard (Fr) (Kapgarde {Fr}), who was runner-up to his stable-mate Minella Indo (Ire) (Beat Hollow {GB}) last year but turned the tables in emphatic fashion this time around. Tackling the defending champion for the lead over the final fence, the 8-year-old A Plus Tard found an extra gear when making light work of Cheltenham's famous hill to win going away by 15 lengths.

“It's the closest thing to feeling like a rock star you will ever feel without being able to sing,” said Blackmore. “It is just incredible to have people back and I feel very, very lucky.”

Twelve months ago at a distinctly different Festival with not even owners allowed on course to watch their horses, Blackmore had ended the week as the leading rider, setting a new first then by winning the Champion Hurdle on Honeysuckle (GB) (Sulamani {Ire}). A month later, another groundbreaking moment was recorded when Blackmore became the first woman to win the Grand National, sealing an extraordinary season for trainer Henry de Bromhead, for whom she is the principal rider.

Much pre-Festival chat had focused on de Bromhead's stable being out of form, but the Irishman returned to Cheltenham with his big guns blazing. Honeysuckle snared the Champion Hurdle for the second time and Bob Olinger (Ire) (Sholokhov {Ire}) took advantage of the desperate last-fence fall of Galopin Des Champs (Fr) (Timos {Ger}) in the G1 Turners Novices' Chase, but the best was saved for last with a repeat, albeit reversed, quinella in jump racing's blue riband.

With Blackmore moved to tears and struggling to find the words to convey her response to her historic victory, thoughts also turned to the late David Thompson of Cheveley Park Stud, whose decision to race a few jumpers for a bit of fun has been transformed into a phenomenally successful project. Thompson died in December 2020 but his wife Patricia, son Richard, and three grandsons were at Cheltenham to enjoy the plundering of National Hunt racing's biggest prize in their colours, which for decades have been more synonymous with top-class Flat runners.

“My father would be loving this,” said Richard Thompson. “He was behind the project and this horse was the first one he bought and was the last one he saw win before he died. He watched the Gold Cup for many years, and to win it is incredible. It's a fantastic day for the family. That was all class. We know he's got so much quality and Rachael rode the perfect race. It's the Gold Cup, anything can happen, but it looked so smooth.”

With Asterion Forlonge (Fr) (Coastal Path {GB}) cutting out much of the early running and previous Gold Cup runner-up Santini (GB) (Milan {GB}) and Aye Right (Ire) (Yeats {Ire}) taking close order through much of the first circuit, Blackmore had A Plus Tard buried away in mid-division, biding their time before the main contenders started to lay down serious challenges as the field descended the hill with three left to jump.

A Plus Tard coasted into contention, but initially had no obvious way through a tightly packed throng of horses ahead of him, including Minella Indo and another previous winner, Al Boum Photo (Fr) (Buck's Boum {Fr}). As members of that leading group started to surrender, Blackmore's patience was rewarded when a gap opened up for A Plus Tard to breeze between Protektorat (Fr) (Saint Des Saints {Fr}) and Al Boum Photo to launch his bid for glory.

“The wall of horses in front of me made sure I didn't get there too soon,” said Blackmore. “He felt very happy throughout the race this year and jumped fantastically, and I was able to take him back a little bit everywhere.

“Thankfully he was just really good over the last two and he picked up incredibly over the last. It is an incredible feeling when you do that over the back of the last at Cheltenham. I was taking my luck and we got the split.”

The modest rider refers to luck regularly, and indeed just as hers was in on Tuesday when steering the peerless Honeysuckle to a second Champion Hurdle victory, Blackmore hit the floor hard in the next race when brought down with Telmesomethinggirl (Ire) (Stowaway {Ire}).

Luck, like form, comes and goes in racing, but class, as they say, is permanent. And it would be hard to find a classier act in the sport right now than the 32-year-old Blackmore. Revered and respected by her peers, a heroine to so many youngsters watching on in the hope that they can follow in her wake, she is everything that racing needs, especially at a time when it so often finds itself on the front pages for all the wrong reasons.

“I just feel so lucky. I just don't know how or why I am so lucky to be in the position that I'm in,” she said as she composed herself in the winner's enclosure. “Not every jockey gets to be in this position. Last year I had the choice between the horses who came first and second in the Gold Cup–who is that jockey that gets to do that? Thankfully this year I was on the right one.”

Blackmore continued, “I'm very lucky to be getting to ride these kind of horses. Henry is just an incredible trainer and he has had another one-two in the Gold Cup, that is just incredible.

“I can't believe it's not even 12 months since the Grand National happened, and what with Honeysuckle this week winning her Champion Hurdle, I wish I had better English to describe how I feel, to be honest, as it is very overwhelming. This really is a magical place.”

Describing his stable jockey as a “savage rider”, de Bromhead added, “It's incredible to be involved and I'm just delighted for her.

“Rachael said to me about three weeks ago that she was kicking herself [about last year's Gold Cup] and she wanted to ride him to use his pace. I said to her to do whatever she wanted, and she started banging on about what she was doing as we were about to leg her up. I just said 'you're the boss'. That was it, and coming down the hill and I thought she was very brave and brilliant. It was an incredible ride.”

He continued, “It's been a ridiculous year. Everyone's been telling me how bad my horses are going, so we've had a few bad months as well. Even a couple of runners this week have made me wonder if there's a problem, but then you see Honey and this guy–they were unreal.

“One thing I have to say is to get the roar this year is fantastic. It was amazing to win it last year but with the crowd here it's just a different league.”

It was Ireland's day on Friday, with all seven races falling to visiting trainers. Henry de Bromhead may have claimed the headlines by landing the big one for the second year running, but much of the day belonged to Willie Mullins, who celebrated five winners to take his tally to a record-breaking 10 for the Festival of 2022. Mullins was already the winningmost trainer at Cheltenham and his incredible Festival record now stands at 88 winners.

First blood was drawn by the burgeoning young talent of Vauban (Fr) in the JCB Triumph Hurdle, now a dual Grade 1 winner over hurdles for his young sire Galiway (GB) who could yet revert to the Flat, with the Melbourne Cup mooted as a possible target post-race by owner Rich Ricci.

Mullins hadn't finished yet, but three different jockeys were deployed to claim his next three wins: Sean O'Keeffe scored his first Festival success on the horse who could have been named for his trainer, The Nice Guy (Ire) (Fame And Glory {GB}), in the G1 Albert Bartlett Novices' Hurdle. The race brought joy for owner Malcolm Denmark, celebrating his first Festival winner since Monsignor (Ire) won the G1 Royal & SunAlliance Novices' Hurdle in 2000, but it was marred by the fatal injury between the last two flights for Ginto (Fr) (Walk In The Park {Ire}).

Mullins's son Patrick, one of Ireland's leading amateur riders, claimed victory in the final strides aboard Billaway (Ire) (Well Chosen {Ire}) in an important race hitherto missing from his impressive record, the St James's Place Foxhunters Chase, informally known as the amateurs' Gold Cup. Lastly, it was the turn of Mark Walsh to drive the game grey mare Elimay (Fr) (Montmartre {Fr}) home to glory in the G2 Mrs Paddy Power Mares' Chase, in which she was runner-up last year.

While it was Irish-trained horses who figured most prominently on the final day of the Festival, a number of the key winners had been bred in France. Notably, A Plus Tard was bred by Henri and Antonia Devin at their hugely successful Haras du Mesnil near Le Mans. They had extra cause to enjoy their day at Cheltenham as the County Hurdle winner State Man is a son of their resident stallion Doctor Dino, the most sought-after jumps sire in France, as is the Triumph Hurdle runner-up Fil Dor (Fr), who is also a Devin-bred.