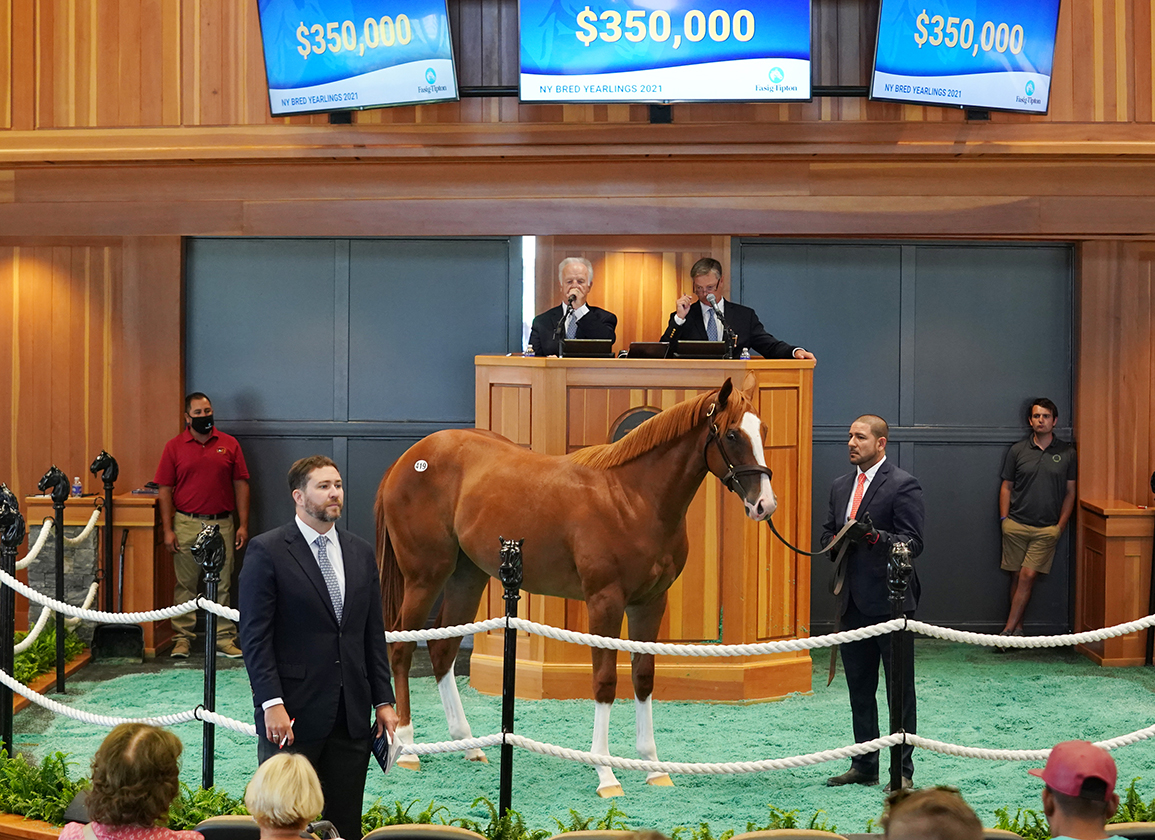 SARATOGA SPRINGS, NY–The Fasig-Tipton New York-Bred Yearlings Sale completed a successful return Monday at the Humphrey S. Finney Sales Pavilion in Saratoga, as a lively day of trading built on a strong Sunday opener to conclude the auction with average, gross and median numbers up and the RNA rate down compared to 2019 numbers.

“We got the sales superfecta: average was up, median was up, gross was up and the RNA rate's down. So we hit the super today and we're obviously very pleased,” said Fasig-Tipton President & CEO Boyd Browning. “We had significant bidding from a diverse buying group. We're fortunate enough that the consignors once again gave us outstanding horses and presented them in a very, very positive manner. The buyers continue to have more and more confidence coming to the sale.”

Fasig-Tipton was forced to cancel its 2020 renewal of the New York-bred sale as well as its Saratoga sale due to the COVID-19 pandemic, an interruption that Browning said affected New York-bred interests particularly harshly.

“I've said before, there was no segment of the marketplace more adversely affected by the COVID situation last year than the New York-bred yearling marketplace,” he said. “So it's nice to restore the marketplace for them; they can have confidence going forward. We've always been committed to this sale and marketplace, but any time you have a disruption, it's difficult. And there was a significant disruption for the breeders and folks who sell New York-breds last year. It's reassuring to be able to look at them and say, 'You can continue what you're doing with confidence.' I think the sale's going to continue to grow and grow, and people are going to be encouraged to both buy and breed New York-breds.”

The Fasig-Tipton sales calendar resumes with the one-day Pin Oak Stud Sale, in which Josephine Abercrombie's Pin Oak Stud, one of the country's most successful Thoroughbred breeding and racing operations over the past six decades, will be offering its remaining broodmares, weanlings, and some racing fillies, Sept. 12 in Lexington.

Forming a partnership of GMP Stables, Vekoma Racing and West Paces Racing the morning of Monday's second Fasig-Tipton New York-Bred Yearlings session, Oracle Bloodstock's Conor Foley came out on top for the group when the hammer dropped for a session-topping $350,000 for Hip 419, a filly by Munnings out of MSW Freudie Anne (Freud).

Bought for $130,000 by Cherry Knoll Farm at Fasig-Tipton February earlier this year, the chestnut sold under the Hunter Valley Farm banner. She is the second foal out of Freudie Anne, a two-time stakes winner in her racing career and half-sister to MSW Frostie Anne (Frost Giant), following a thus-far unraced juvenile full-brother who sold to Pick View for $100,000 at last year's umbrella Fasig-Tipton Selected Yearlings auction.

Foley and the partners already were looking forward to bringing hip 419 back upstate next year, saying, “She's going to go to the races. She'll come back up here and be trained by Danny Gargan. Hopefully in about a year we'll be walking out of the winner's circle at Saratoga.”

Len and Jon Green's D J Stable was in the market for a potential Classic colt at Monday's Fasig-Tipton New York-Bred Yearlings Sale and came home with a popular prospect Monday in Hip 528, with Jon Green signing the winning ticket for $300,000 for a son of star third-crop sire Constitution.

“He reminded us of a lot the great colts that we've seen running on Saturdays,” Green said. “He's a big, scopey, two-turn type of horse. We came here looking to get a real top colt and he fit the bill and checked all the boxes for us. The plan is to ultimately have him at Mark Casse's barn. He'll head back to Kentucky and get a little R and R because [the sale] takes so much out of these horses. Let him eat a little green grass, give him six to eight weeks and then he'll head down for to Ocala and start getting into the program.”

On the final number for the colt, Green said, “It surprised me a little that we had to go to the upper level of what we wanted to for a horse like this, but the sale has been so strong that if you want to come away with a good horse, you have to spend a little bit of money. The nice thing about it is that even though he's a New York-bred, that wasn't even part of the calculus. He's such a grand-looking colt that hopefully if he's running here in New York, it'll be in races like the Travers and the Belmont and not in a New York-bred other than. We felt that [regardless of] if he was a New York-bred, Kentucky-bred, Florida-bred, Peruvian-bred, he's just that kind of a horse. We came here specifically to buy a horse like this. We do have a couple more on the list, but he was our number one choice.”

Accelerate Speeds Ahead With $300K Colt

Lane's End's champion Accelerate, who made a splash Sunday night at the Fasig-Tipton New York-Bred sale, kept the forward momentum going when his Hip 591, a colt consigned by Paramount Sales, sold for $300,000 in the waning moments of the auction Monday afternoon. Barclay Tagg signed the winning ticket along with longtime assistant Robin Smullen and owners Chris and Dave Stack.

“We liked everything about him,” Smullen said of the colt, who was led out unsold on a bid of $100,000 at Keeneland November last fall. “He was intelligent. We weren't happy with how he was acting in the back ring, but when he got in the ring he was fine. He's a nice colt. [The price] was a little higher than we wanted to go, but we bid on a filly earlier that we couldn't get.”

“We are very good friends with Barclay and Robin and admire and respect them and their opinions,” said Chris Stack. “When we saw him, we just thought he was the one. He looked me right in the eye though, I will tell you.”

Tagg and Smullen stayed in for a small piece of the horse, their first owning partnership with the Stacks.

“We trained for Chris and Dave a long time ago, but now we have one together,” Smullen said. “We just own one ear, Chris and Dave own the rest of her.”

Tagg and Smullen also bought another Accelerate progeny earlier in the day for Sackatoga Stable, going to $130,000 to secure Hip 460, a chestnut colt out of MSP Late 'n Left (Lucky Pulpit).

Asked to compare Hip 591 to that colt, Smullen offered, “The other Accelerate that we bought tonight for Sackatoga Stable looked a little more refined, a little smaller. But I don't know what to expect them to look like yet. We liked his dam side. When you're a half to a multiple stakes winner, you've got to be alright.”

The connections of hot-starting freshman sire Practical Joke showed their faith in his success continuing at Monday's Fasig-Tipton New York-Bred Yearlings Sale, as Chad Brown signed the ticket for Klaravich Stables for a bay filly by the Coolmore resident for $250,000. Consigned by Indian Creek, Hip 508 is the second foal out of Orient Moon (Malibu Moon) to sell for that figure this year after her 2-year-old Street Boss colt commanded the same number at OBS April.

“I trained the sire for Seth [Klarman] and she was definitely the best-looking dirt filly I saw here,” Brown said. “It was definitely our last bid. She will go down to Ocala and we'll see how she takes to training. She just happened to be a New York-bred, but she was as good-looking as any Practical Joke filly I've seen.”

Victor of the GI Hopeful S. GI Champagne S. as a juvenile in 2016, Practical Joke followed up with a score in the GI H. Allen Jerkens S. at Saratoga the next summer and won or placed in six other graded stakes before retiring with nearly $1.8 million in earnings. He ranks third among North American-based freshman sires with 10 winners and was represented by blowout GIII Sanford S. hero and 'TDN Rising Star' Wit earlier in the Saratoga meet.

“You can see the Into Mischief in [Practical Joke's progeny], so it's exciting.” Brown said. “We are very big supporters of the stallion. We have some 2-year-olds that we like and it's exciting that he's off to such a promising start.”