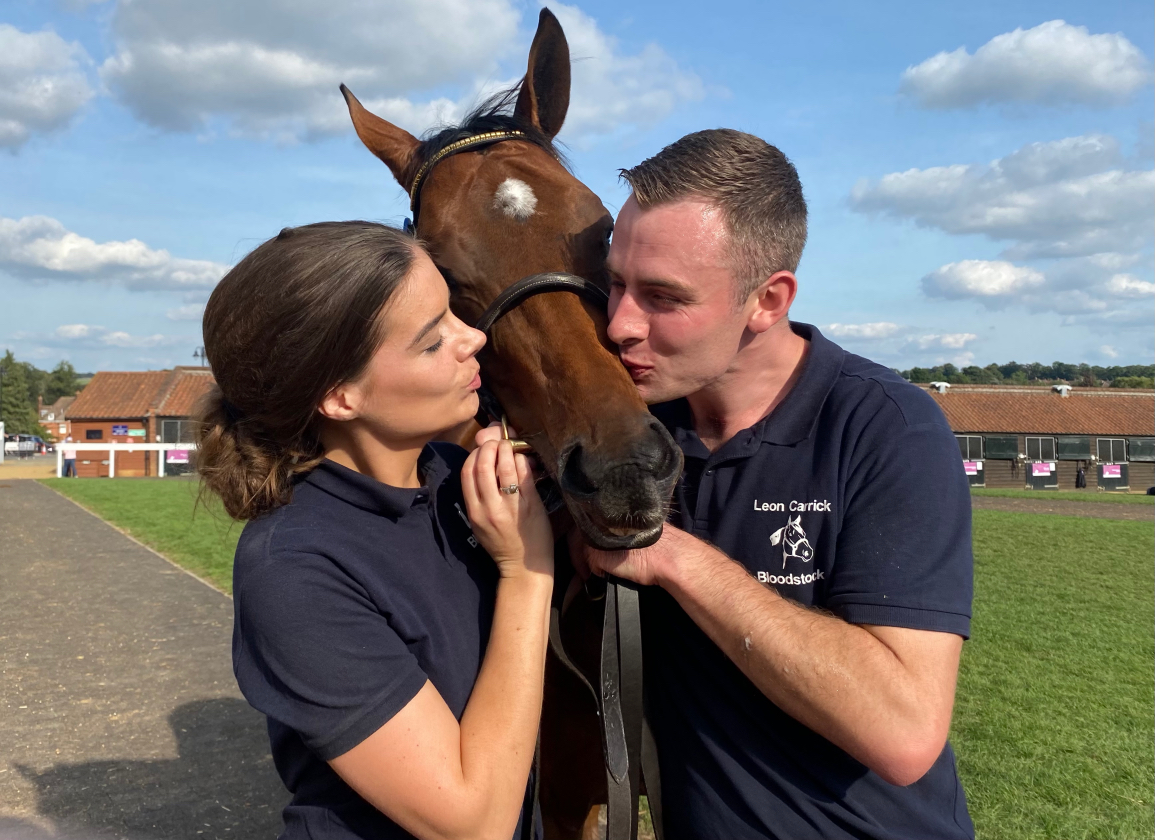 NEWMARKET, UK–Ah, the yearling sales. It's a long old season and sometimes the more elderly members of the press desk can get a little jaded by the halfway point, not to mention discombobulated. After all, we're at a Tattersalls Ireland sale in Newmarket, where instead of selling in guineas or euros, the horses are changing hands in sterling. But every now and then a feelgood story comes along to soften even the stoniest of hearts.

Let's face it, the day started pretty well: the sun shone and the free ice-cream stand was unveiled, attracting an even more attentive throng than Heaven, the, er, gentlemen's club at the bottom of Tatts hill. And then midway through the afternoon from the the exit at the back of the ring burst a bonny Ardad (Ire) colt led by Irishman Leon Carrick, who is a policeman in real life but does a pretty convincing job moonlighting as a yearling consignor and pinhooker. He was quickly joined by his girlfriend Michelle Gibbons, all smiles and hugs and kisses–some of them even directed at Carrick, but most of them landing on the yearling colt who had been transformed from a 7,500gns foal into a £105,000 yearling.

“We bought him while lying in bed–best online shopping ever!” Carrick said with a grin, bringing a hitherto unconsidered upside to being confined to quarters through lockdown. “We couldn't come over here because of Covid and I'd just come in from a night shift. We liked him and decided to buy him online and he has been an absolute delight to do everything with, and of course we have been delighted to see the stallion doing so well.”

Ardad, the young son of Kodiac (GB) based at Overbury Stud, has certainly not let down those foal buyers and breeders who put their faith in him last year as he has made a hugely promising start with his first runners this year, headed by the G1 Darley Prix Morny winner Perfect Power (Ire). The colt consigned by Carrick as lot 154 was bred by Saeed Nasser Al Romaithi and is out of the Azamour (Ire) mare Mara Grey (Ire), already the dam of the dual winner Constanzia (GB) (Dandy Man {Ire}).

Based on The Curragh, the 27-year-old Carrick is the nephew of well-known breeze-up consignor Johnny Collins and has served his time on studs working for the Aga Khan, Coolmore and at Curraghmore in New Zealand. Before joining the Gardai he also worked for Richard Brabazon, who trains Apple Of His Eye (Ire) (Mehmas {Ire}) for Carrick and Gibbons, who is also 27.

Carrick continued, “I didn't in my wildest dreams expect to get a figure like that. Michelle wants to go to college to do a midwifery course and she'll be able to do that comfortably now. Our thanks have to go to my uncle Johnny, who supports me, and to Richard Brabazon, who allowed us to use his facilities this year.

“We prep a few horses every year, a few cheap foal purchases, hoping that something like this will happen, and this has given us a great boost. If we get a few more results like this we might do it full time.”

The couple has four yearlings to sell this year, including a Dawn Approach colt (lot 296) who is catalogued on Wednesday.

The man who bought the colt has had the inside track on Ardad from the start as Robson Aguiar, who signed the ticket on behalf of Amo Racing, rode Ardad in his breeze at Doncaster back in 2016 and he has been a strong supporter of the stallion at the sales.

Both consignors and purchasers expressed a mixture of surprise and delight as the first day of the Tattersalls Ireland September Yearling Sale drew to a close in Newmarket. The fact that it had been relocated for the second year running amid uncertainty over the lifting of Covid restrictions in Ireland was not ideal, especially for a number of Irish consignors, but many now will be relieved to have taken the plunge and stuck with the sale. The median of £20,000 was up by 18% on the equivalent day of trade last year, while the average rose by 13% to £26,729 from 42 more horses sold this time around–217, bringing an identical first-day clearance rate of 85%. The day's takings amounted to £5,702,500.

The Ardad colt was not the top price of the day, his tag having been bettered twice by two colts bought by Adam Driver of Global Equine Group on a day of trade that surpassed most people's expectations on both sides of the transactions.

The first yearling to have breached the six-figure mark during the lively opening session was a second-crop son of Churchill (Ire) (lot 111), sold by Grange Hill Stud for £110,000. His dam Komedy (Ire) has given Mark Hanly and his mother Stephanie plenty to smile about in the early days of her stud career and the Kodiac (GB) mare struck gold again on Tuesday when her yearling colt became the first at the sale to breach the six-figure mark.

Consigned by his breeders, he is the third foal of his 8-year-old dam, who was bought in the same ring at the Horses-in-Training Sale for 9,000gns. A winning sister to the listed victrix On Her Toes (Ire), Komedy did not take long to advertise her potential as a broodmare when her first foal Internationaldream (Ire) (Acclamation {GB}) won twice at two and was third in the G3 Molecomb S.

“He is a very taking individual and I thought to myself that he'd be a standout at this sale,” said Mark Hanly. “It is a nice, fast family, and he is out of a Kodiac mare and they are working very very well at the moment on the track. The mare is a typical Kodiac and when I first saw Churchill at stud, I absolutely loved him. He has a big physique and would suit a Kodiac mare, and the cross of Danehill and Galileo suited too.”

The Global Equine Group, which Driver said already has two Churchill juveniles in training in Newmarket with Tom Clover, later signed up the leading light of the day online when going to £130,000 for lot 217, Castlehyde Stud's smart chestnut colt by No Nay Never out of the Galileo (Ire) mare Pink Damsel (Ire).

“It's great to have the top lot,” said Castlehyde Stud manager Paddy Fleming. “We brought him here to stand out and he did just that. He was born and raised on good limestone land at Castlehyde and the mare has been very good to us.”

A winner herself at three, Pink Damsel is a daughter of the dual Grade I winner Riskaverse (Dynaformer) and thus a full-sister to the G3 Dance Design S. winner Say (Ire). Her first foal, Glengowan (Ire) (Kingman {GB}), is already a winner and her Caravaggio 2-year-old Sarsons Risk (Ire) was third on debut at Newbury last month having been bought at the Craven Breeze-up Sale for 120,000gns.

A Filly To Go Farhh

Muscling her way in to be the top filly of the day was an athletic daughter of Farhh (GB) consigned by Nelius Hayes as lot 81 through his Knockainey Stud. At £90,000, she was the most expensive of nine purchases by Peter and Ross Doyle, who confirmed that she would go into training with Richard Hannon, whose previous positive experience with the sire runs to training the 2000 Guineas runner-up King Of Change (GB).

“We have been very lucky buying from Nelius Hayes over the years,” said Ross Doyle. “She is the nicest filly Nelius has brought to the sales for a few years. She is nicely sized and she has a bit of class to her.”

Hayes, who with a partnership picked up the filly's dam Imasumaq (Ire) (Teofilo {Ire}) for 16,000gns when carrying this filly, added, “A friend of mine and neighbour Michael O'Dwyer bought her here at the December Sale. Everybody just seemed to like this filly. We had no expectations of anything like that coming, but as the days go on you get hopeful.”

Hayes was pleased with the early decision taken to switch the sale from Ireland to the UK. He said, “It was a difficult decision for Tattersalls to make, but I think they did the right thing making a call that they were going to stick to this date and sell here. In hindsight perhaps there could have been time to go back to Fairyhouse, but it gave us all some certainty by making a decision back in the summer.”

Richard Hannon's brother-in-law and fellow trainer Richard Hughes will also take charge of one of the day's top lots after going to £85,000 for lot 70, a colt by Make Believe (GB) who represented a successful pinhooking debut for brothers Tom and Davy Brickley of Ard Erin Stud. They bought the son of the unraced Tamayuz (GB) mare Hidden Girl (Ire) for €8,000 last year at Goffs.

“He was our very first pinhook,” said Tom Brickley, 29. “We've loved him the whole way through, he has been a champion. We are delighted to get so well paid, we were dreaming about it but never thought it would happen.”

He added, “He came from Brendan Hayes of Knocktoran Stud, who is a great breeder, and we loved his action from the start. For a big horse he moved so well. Everyone at home is part of the team–mum, dad and our sisters. Dad always had a mare at home, but we are the first to do horses in a bigger way. We caught the bug and decided that we wanted to do this game, and we both learnt from the top farms.”

A half-brother to the 100-rated Muraad (Ire) (Dark Angel {Ire}), the colt will be sent to former champion jump jockey AP McCoy for breaking and pre-training, according to his friend Hughes, who said, “I loved him from the minute I set eyes on him. He's not a 2-year-old type, he'll probably be more of a 3-year-old. I haven't had any by Make Believe before but I've been following his stallion career.”

Another of the day's top fillies was a decent pinhook for Guy O'Callaghan, who on Saturday celebrated the G2 Mill Reef S. victory of Wings Of War (Ire), who was bred by him at his Grangemore Stud. The same stallion, Dark Angel (Ire), was responsible for both, and lot 129 had been picked out as a foal by O'Callaghan for 20,000gns. Trainer Tom Ward, acting on behalf of a syndicate, ended up as the successful bidder on the easy-moving grey, out of the Group 3-placed Light My Fire (Ire) (Dragon Pulse {Ire}) at £80,000.

Mark and Barbara Dreeling's Coole House Farm enjoyed a good day through the sale of lot 224, a colt by the late Fast Company (Ire) whose brother Flashcard (Ire) was third in the G3 Sovereign S.

“He has been a gentleman since the day he was born. Hopefully he will be as lucky as the full-brother,” said the couple's daughter Megan after the colt sold for £90,000 to Ed Dunlop and JD Moore.

Her mother added, “He has been very busy today and he can really move. The mare doesn't have a foal as she's not an easy mare to get in foal, but she is now in foal to Gleneagles.”