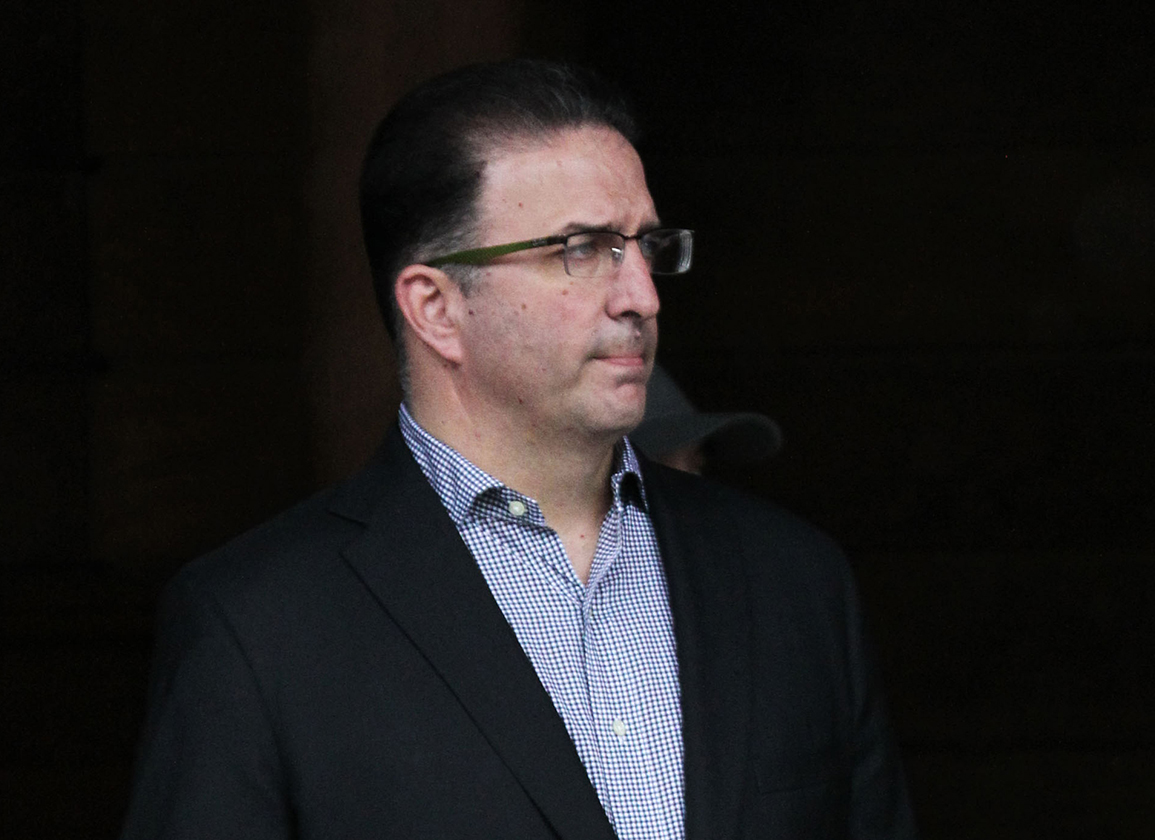 When Larry Rivelli picked up the telephone, he did so from his Del Mar hotel room, watching a race replay of a horse claimed out of his yard.

“I'm a little OCD,” he said, in explanation of his unusual leisure-time viewing, before turning the spotlight onto a latest obsession, One Timer (Trappe Shot), his leading contender for the GII Breeders' Cup Juvenile Turf Sprint.

Nor is this kind of behavior confined to just One Timer.

“It's the way I'm made. You don't really have a life, and people are like, 'We're going out tonight to do this, that and the other,' and I'm like, 'Yeah, it's okay.' I'm probably considered a boring person when it comes to that stuff!”

With the air of a seasoned raconteur about him, Rivelli's self-diagnosed “bore” seems a bit of a stretch–a droll quip of self-deprecation. But who are we to argue with the OCD, tempered as it is with a grounding rod of pragmatism.

Or to put it into racing parlance: Rivelli's not one to over-face 'em.

“We pride ourselves on winning, and you know this game,” he said. “It's a humbling sport.”

Over the course of more than 21 years, he's amassed 1,650 wins and counting, along with more than $30 million in the bank. At Arlington Park alone, he clinched nine straight training titles.

But it's fair to say his battalions are mostly of the blue collar, rather than the silver spoon, variety. His graded stakes haul numbers eight, all of them Grade IIIs.

His record at the Breeders' Cup–of his four runners, three finished fourth and one ran fifth–further demonstrates a similar spirit of utilitarianism.

“You think you've got a good one until you line up against 12 other ones that are just as good as you,” he explained. “Got to be realistic–I don't like to do anything where I don't think I've got a shot.”

But with One Timer, Rivelli's expectations are given rare flight.

“I think we're going in here with the best shot so far,” he said. “Breaking through to win one would be great. Highlight of my career, obviously.”

Rivelli's enthusiasm is understandable given the impressive ease with which One Timer has dispatched his rivals in three races to date, showcasing a Boeing engine cruising speed.

On his debut at Arlington in June, he reared in the gates, but quickly scampered to the lead, careening away by more than 12 lengths.

In the Victoria S. at Woodbine his next start, One Timer was again a little tardy leaving the gates, but soon grabbed the race by the scruff of the neck, winning convincingly by 3 3/4 lengths.

Before his last start, the Speakeasy S. at Santa Anita, the Rivelli team schooled him extensively in the gates. And it worked. In the race itself, One Timer was a perfect model, breaking sharply before driven by jockey Eddie “E.T.” Baird into the lead where bit by bit they pulled clear of the rest.

“He's definitely maturing in front of our eyes,” Rivelli said of One Timer, whom he purchased from last year's Fasig-Tipton Kentucky Fall Yearling Sale for just $21,000.

“Getting broke, he was a little hard to handle, and they suggested I should cut him,” said Rivelli. “That was the best thing that could happen to the horse. I think that's why the horse is as good as he is.”

Not that he was especially difficult.

“Was just a little bit rumbunctious, a little bit high, that's his type,” said Rivelli, who doesn't see One Timer's speed as one dimensional, either.

“I think he's going to be a monster when he goes three-quarters, seven-eighths,” he said. “He doesn't necessarily have to be a turf horse in my eyes–he's a good horse.”

Before then, however, there's the little matter of the Breeders' Cup. In Monday's draw, One Timer plucked the nine position, just to the outside of Wesley Ward's likely favorite, Averly Jane (Midshipman).

“As far as I see it, there's no excuse,” said Rivelli, pointing as a positive how One Timer remained at Santa Anita after his Speakeasy win in early October. “He's acclimated, he's doing great.”

A Breeders' Cup victory would be a fitting culmination for a family of horsemen spanning three generations, with his uncle Jimmy DiVito and grandfather Peter DiVito both trainers of repute.

His name also brushed up against one of America's more salacious true crimes.

“She was friends with my grandmother, and my grandmother was waiting for her at O'Hare [Chicago's O'Hare International Airport], and she never showed up,” said Rivelli about Helen Brach, heiress to a candy company fortune when she went missing in February 1977.

Brach's disappearance was later tied to a Chicago horse stable owner and his associates, accused of defrauding Brach.

“That was it, nobody ever found her,” said Rivelli. “She had just got into the Thoroughbred business and he [Peter DiVito] had a bunch of real nice horses for her.”

Having spent his youth around his uncle's barn, Rivelli didn't launch immediately into training. At first, it looked as though a career in pro football was on the cards–got a full scholarship to the University of Minnesota. But a few disappointing tryouts left him with limited options.

And so, instead, he sold cars.

“First year out of college, I made a load of money, about $175,000. One of my buddies owned the dealership. It was the perfect timing getting out of school, bought my first house, then eventually turned all of my focus onto training racehorses.”

Did some of those lessons he acquired as a car dealer translate into training?

“You've got to have intangibles,” he said. “And you've got to have good owners. You can be the greatest trainer in the world but if you've got 20-head of horses and the owners are making you run them all out of line, you're never going to win–you'll be judged on that.”

It helps, then, if some of your most loyal patrons are more than just sign-on-the-dotted-line associates, like One Timer's owners Richard Ravin and Patricia's Hope, nom de course of Vincent Foglia.

“These people are my buddies–we live in the same subdivision [of Chicago],” he said, describing them as a “family” that golfs together, eats dinner twice a week together.

“I can't remember, to be honest with you, if him or I or Richard have ever gotten into an argument over anything,” he said. “That's impossible in this game.”

“You're going to make a lot of trainers jealous,” I replied.

“You don't have to print that if you don't want to!”

But now, with the death knell having rung at Arlington Park, that enclave of friendship looks set for a disruption.

As a result, Rivelli expects that he'll cut his string by 30%. And while he'll continue to have a significant presence at Hawthorne, he might be spending much more time away from home than typical, “and that sucks, because I've never had to go anywhere,” he said.

“I'll be at Turfway this winter and Gulfstream. After that, we will come back to Chicago for the summer meet, and then I will go back to Kentucky probably in the fall,” he said.

But that's all for the future. Right now, Rivelli sits poised before arguably the most consequential race of his career. Should One Timer win, don't expect to see him on day two of the Breeders' Cup championship.

“There might be a party Friday night,” he said, further belying that “bore” label. “Might not make the races on the second day. I can guarantee you we won't make it if we win.”