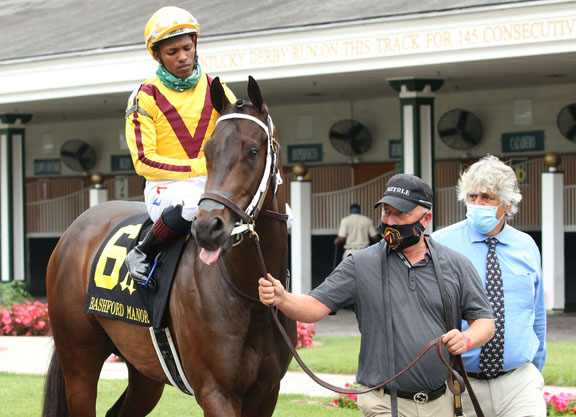 With the outposted Roderick (Into Mischief) scratching in favor of a start in Saturday’s GII Best Pal S. at Del Mar, a field of 10 is set to face the starter for Friday’s GII Saratoga Special S.,headed by a trio of promising ‘TDN Rising Stars.’

Trainer Steve Asmussen, already a four-time winner of the Special, sends out Stonestreet homebred Cazadero (Street Sense), who looks to take his record to a perfect three-for-three. The May foal, a son of MSW & GISP Wild Gams (Forest Wildcat), set a pressured early pace before romping clear by 8 3/4 lengths on Churchill debut May 29 and showed a bit of a new dimension last time, sitting off a faster tempo before kicking home to win the June 27 GIII Bashford Manor S. by 4 3/4 lengths. Cazadero will attempt to join former Asmussen trainees Cuvee (2003), Kodiak Kowboy (2007), Kantharos (2010) and fellow ‘Rising Star’ Copper Bullet (2017).

“It’s nice to have a couple of races under his belt heading into a race like this at Saratoga,” said Asmussen’s chief assistant Scott Blasi. “He came in very well-respected and hasn’t done anything wrong yet.”

First-call rider Ricardo Santana, Jr. retains the mount on Cazadero, while Joel Rosario takes the call on Jackie’s Warrior (Maclean’s Music), a 2 1/2-length maiden winner at first asking in Louisville June 19. Second on that occasion was Therideofalifetime (Candy Ride {Arg}), who franked the form of the winner when swooshing home to graduate by 8 1/4 lengths at Keeneland July 11, good for the ‘Rising Star’ nod. Jose Ortiz, aboard in Lexington, is at the controls again Friday.

Fresh off a 6 1/2-length defeat of hot favorite Mo Mischief (Into Mischief) in a 5 1/2-furlong maiden over this track July 18, ‘Rising Star’ Momos (Distorted Humor) will try to give Christophe Clement a seventh black-type win at the meet in the Special instead of just waiting for the meet-ending GI Runhappy Hopeful S. over seven furlongs Sept. 7.

“He’s coming back a little quick with three weeks in between races,” Clement said. “I could have trained for the Hopeful, but this is the best of the choices, so to speak. I just would like to keep him going short in a stakes on dirt and this was the logical one. He seems to be very fast, so why change something that is working?”