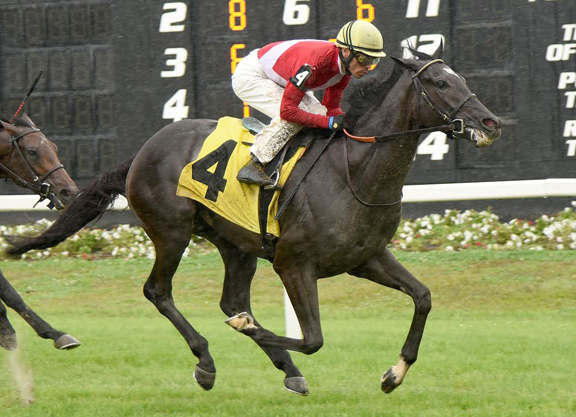 While much focus on the 3-year-old crop through the winter and spring months understandably centers on the road to the May 6 GI Kentucky Derby, trainer Eddie Kenneally has quietly been developing a promising turf prospect in Brad Anderson's 'TDN Rising Star' Parlor (Lonhro {Aus}), recently an easy winner of a Feb. 22 allowance test at Tampa Bay Downs [video]. With a maiden victory at Ellis Park and a hard-luck runner-up finish in the Sept. 3 Kentucky Downs Juvenile S. on his 2016 resume, the dark bay will get his chance to seize the spotlight in Saturday's GIII JACK Cincinnati Casino Spiral S. at Turfway Park–the fourth start of his young career and his first on a surface other than turf.

“He has plenty of ability and he's a little unlucky to not be undefeated,” Kenneally said, referring to the colt's Kentucky Downs effort, where he steadied at a crucial point in the race before rallying to miss by a neck. “His comeback race at Tampa was very good. He won convincingly and he did it quite easily.”

Parlor overcame a moderate early tempo and rallied from last to comfortably dispatch five overmatched rivals at Tampa, striding clear under minimal encouragement from jockey Jesus Castanon. Despite Parlor's obvious talent on the turf, Kenneally said the Spiral will provide insight into the horse's ability to adapt to an unfamiliar synthetic racing surface, while tackling the toughest competition of his career.

“He hasn't done anything wrong so far,” Kenneally continued. “We don't know who's going to love that track at Turfway, it's a different track for almost all of the horses that are running in there. Some of them are going to love it, and some of them not so much. He hasn't trained on [synthetic] at all, so it's a little bit of an unknown.”

Kenneally's plans for Parlor following the Spiral are also unknown. Although a win in the race would earn the colt a sufficient 50 points toward a spot in the Kentucky Derby spotting gate, the Irish-born trainer is in no hurry to punch his ticket for the First Saturday in May.

“We'll evaluate him again after he runs, and then decide where we want to go from there,” Kenneally explained. “We're just taking it one race at a time. We know we have a pretty good grass horse, but we don't know about synthetic or dirt. We'll learn a little bit more about the horse on Saturday, and hopefully we'll have a decision to make after that.”

Kenneally has another pair of 'Rising Stars' who are expected to return to the races this spring and summer in GIII Sanford S. winner Bitumen (Mineshaft) and Lucy Goosey (Into Mischief). The latter caught the eye with a dominant 9 1/4-length debut triumph at Churchill Downs Nov. 26, and is targeting a return to action later this spring in Kentucky.

“She was very impressive when she broke her maiden in November, and she is a very good filly,” Kenneally said. “She just had some very minor issues so we opted to give her the winter off.”

Meanwhile, Kenneally said he is extremely pleased with Bitumen's training, which has included a string of seven workouts at Palm Meadows Training Center. The dark bay is on schedule to make his sophomore debut early at Keeneland's Spring Meet, which begins Apr. 7.