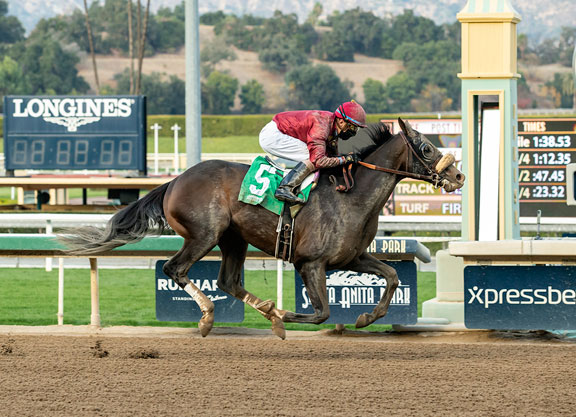 'TDN Rising Star' Roman Centurian (Empire Maker), last seen finishing a neck second to Medina Spirit (Protonico) in the Jan. 30 GIII Robert B. Lewis S. at Santa Anita, worked Saturday at the Los Angeles-area track, getting five panels in 1:00.40 for trainer Simon Callaghan. The sophomore colt is scheduled to take on fellow 'Rising Star' and subsequent GIII Sham S. winner Life Is Good (Into Mischief), who bested him in their Nov. 22 debut at Del Mar.

A $550,000 Keeneland September yearling, Roman Centurian is being pointed to the GII San Felipe S., which is to be held Mar. 6 at Santa Anita. Regular rider Juan Hernandez rode the Don Alberto Stable and Qatar Racing Limited colorbearer in Saturday's work and will be aboard in the San Felipe.

“I was very happy,” Callaghan said. “It was a typical breeze for him. He moved good and finished up really well.”

Continued the trainer, “I think the San Felipe will reveal a lot, but again, Roman Centurian is a very good horse. I'm happy with him and looking forward to the race. It's five weeks from the Lewis to the San Felipe, so we're going to see some progression in our horse. There's lots of blue sky ahead of him.”

The San Felipe leads into the GI Runhappy Santa Anita Derby Apr. 3 and offers 50 Kentucky Derby qualifying points to the winner, 20 to the runner-up, 10 to the third-place finisher, and five to the fourth.