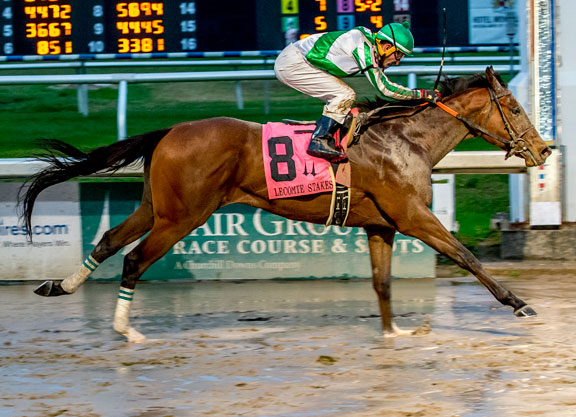 “He looked good and cooled out well,” Howard said. “Everything looked good this morning. I would say we are most likely [running next in the Feb. 25 GII Risen Star S.]. I spoke to Mr. Farish and if all goes okay, it seems like the obvious thing to do.”

A maiden winner at Keeneland last October, Guest Suite was third behind 'TDN Rising Star' McCraken (Ghostzapper) in the Oct. 30 Street Sense S. and concluded his juvenile campaign with an optional-claimer victory at Churchill Nov. 26.

“Looking at the race again, I really like the way he did it,” Howard said. “Lining up how he performed with where we thought he was at in his training was nice. It's a lot to build on.”

“She looked good this morning,” Catalano said of the filly who also won last year's GII Golden Rod S. “She ate up good and is happy. You look forward to days like yesterday. It was a nice family affair and the owners are great people to win the race for. We'll likely go on to the [Feb. 25 GII] Rachel Alexandra.”