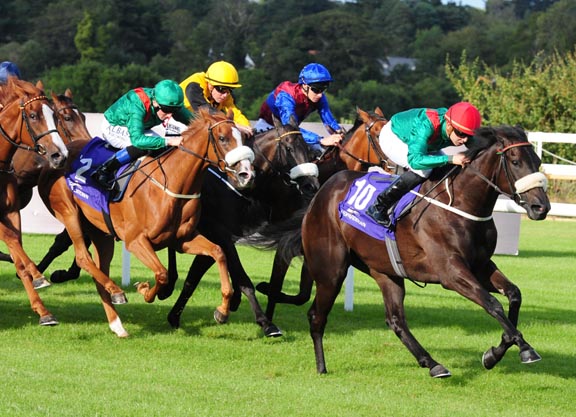 Mick Halford has a strong hand in Wednesday’s pattern races at Leopardstown, with ‘TDN Rising Star’ Ridenza (Ire) (Sea the Stars {Ire}) making her keenly-awaited reappearance in the G3 Derrinstown Stud Fillies S. Half an hour before stablemate Sinawann (Ire) (Kingman {GB}) represents The Aga Khan in the G3 Amethyst S., Ridenza gets her season underway having been taken out of the G1 Irish 1000 Guineas due to the prevalent fast surface. Not seen since winning on debut over seven furlongs at this venue in August, her trainer is hoping for a bold show. “She’s in great form and we look forward to getting her back and getting her started,” he said. “I’m sure we can plan from there, but she’s ready to start.”

Tackling Ridenza are Ballydoyle’s Irish 1000 Guineas third So Wonderful (War Front) and Qatar Racing’s Know It All (GB) (Lord Kanaloa {Jpn}), with the latter last seen finishing runner-up in the G3 Leopardstown Fillies Trial S. over seven furlongs June 9. In the Amethyst, Sinawann stays at a mile having finished sixth in the G1 Irish 2000 Guineas at The Curragh June 12. Halford is keen on seeing if he can build on that encouraging comeback effort. “He’s been in good form since his run in the Guineas and I’m very happy with him,” he said. “This looks a nice race for him. He’s come forward in his work at home.”