Home » Archive » Europe » Richard Hughes: a Trainer on the Rise

Richard Hughes: a Trainer on the Rise 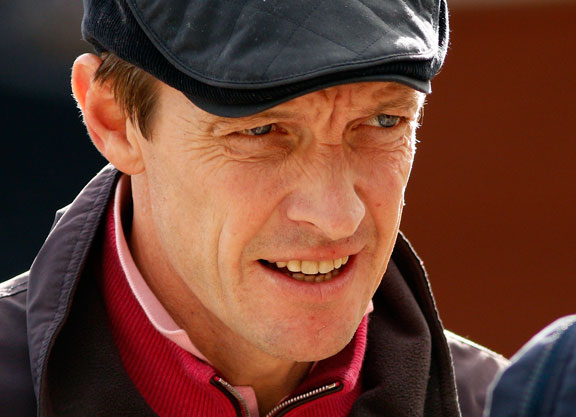 There were many obstacles in the road when Richard Hughes made a high-speed manoeuvre from jockey to trainer in 2015.

With experience, elite owners and even a Classic aspirant now in the stable, there finally seems to be a little time for a man who has been living on his nerves to ease his foot off the pedal.

“I'm very conscious that I really wanted to make this work and the first two years I was very full on, terrified of failure,” he said. “I think the outside world really thought–'champion jockey, straight away he'll be having group winners' and 'he's not winning big races or training Saturday horses', but it's a totally different level to where I was at. I was 15 when I started riding, and wasn't champion until I was nearly 40. That kept me going.”

“There were many arguments with [wife] Lizzie, bringing the work back into the house, being too afraid to ring a fella or not lose an owner because of something,” he said. “There was no pressure riding horses, the only stress I ever had was being on the M25. It's getting a bit easier, realising now I can step away and start to enjoy it.”

One of the great stylists in the saddle hung his own up after Glorious Goodwood in August. It was perhaps the track with which he is best associated despite winning Classics around Europe and as far afield as India and having a Breeders' Cup success to his name.

A month later he began sending out runners from Stockbridge in Hampshire but teething problems with the premises meant that by November he had moved to Weathercock House in Upper Lambourn. The 45-year-old had to get the paperwork through to sell his house and thereby finance the new stable by the following spring–with the family expecting their third child at the same time.

“I think I was 8st 7lb at one stage and I could hardly do that when I was riding,” he recalls. “The first year was tough, they were sick, the 2-year-olds would go three furlongs and fall out the back of the telly. The spotlight was on me. It was my first year going to the sales buying them and we got through it still having winners. The vets said they'd never seen anything like it. Luckily the older horses weren't sick, they were our saving grace, and we didn't buy really early 2-year-olds, they were were nurtured through as handicappers and won races.”

With 36 winners through 2016, Hughes managed a marked improvement to 63 the following season as well as an incredible 91 seconds.

“I suppose that's frustrating, even if there weren't loads of really unlucky seconds,” he explained. “I suppose it shows we're placing them well and they'll keep going up a couple of pounds in the handicap.”

The yard has already received Royal patronage, the legacy of which Hughes believes could stem from riding the Queen's first winner at the new Ascot aboard Free Agent (GB) (Dr Fong) in the 2008 Chesham S. He was delighted to win with Her Majesty's Patchwork (GB) (Paco Boy {Ire} at Redcar and has been sent another juvenile by the same sire.

The likes of Jaber Abdullah and Philippa Cooper are on the roster and a pack of 10 2-year-olds with sharper pedigrees are already in the kindergarten stages on the gallops with the idea of picking up some early median auction races.

Hughes monitors them closely, as he has already been frank in telling significant patrons if they are wasting their time with ordinary horses.

One with whom he would have no interest in parting is Glendevon (Scat Daddy), an impressive winner at Kempton last October. Previously owned by friends Dave Campbell and Danny Waters, the athletic chestnut will now carry the colours of Cheveley Park Stud after it bought a majority stake.

“I hope he's our Guineas horse, but we'll have to find out if he's good enough by running him in the Craven,” said Hughes. “He's got a very extravagant action but I think he'll handle Newmarket. He's not slow and he covers so much ground. I think he'll be a group horse but, with the breeding he has, even if he won the Craven he could be a stallion.”

Whether Glendevon lives up to expectations remains to be seen, but Hughes rode many of the type for the Richard Hannon yard, such as Olympic Glory (Ire) (Choisir {Aus) and Toronado (Ire) (High Chaparral {Ire}). However, one will probably always stand out on his own and the dazzling Canford Cliffs (Ire) (Tagula {Ire}) has the biggest portrait in prime position in his owners' room.

“From day one I rode him he was the best horse I've ever ridden,” he said. “Aidan O'Brien has one of them every year, he really does, but apart from that outfit they come along very seldom. He was so deceptive, and I never got the same feeling again ever in Hannon's. Toronado was very good, so was Olympic Glory, but he was just a bit different.”

After so much time spent with Hannon senior and junior when riding, there has been something of a clean break in professional terms with his former bosses now rivals on the track. They are, of course, still bound by friendship and by blood, as Lizzie is the younger Hannon's sister.

Instead, Hughes is more likely to bounce ideas off long-term weighing room ally-turned-stable jockey Shane Kelly and Patrick McEwan, now on the staff after stints with the likes of Brian Meehan and the late Peter Walwyn.

Hughes has also been overseeing the development of apprentice-of-the-moment Nicola Currie and Finley Marsh, currently preserving his claim with a winter in Australia.

“Nicola was at a bit of a crossroads when she came to me,” he said. “I said to her 'give me four months here and I'll get you your licence'. She's done brilliantly. It's difficult, though, as I'm in no position to be looking after kids as I'm a kid myself in this game. Put it this way, if you arrive five minutes early with me, you've got more of a chance of getting rides than if you're five minutes late.”

Given that he spent so long in the Hannon regime, it seemed likely that he would look to recreate a large-scale operation across the county border capable of one day winning training titles. This might eventually be the case, but he acknowledges that the foundations must be installed first.

“I'm building a team around me really, the sort that when I go away, I know they will do the same things the way I know I would do them. That's the big thing I noticed at Richard Hannon's. People would say 'oh, but he has loads of horses'. The place was in place to cater for loads of horses, there were good people behind him and good people behind them, running a business.”

Hughes continued, “I don't want to jump into that bigger way it unless you're ready and there's a structure. The people around here have my best interests at heart and it's hard to find good people like that. There's such a staff shortage–it's a massive crisis–and most of them stay where they are. If it happens, it happens, but I'm very mindful of having something in place, it can unravel otherwise. At 70 or 80 horses, you can keep an eye on them all. Ten are going to be sick or sorry, so it's easily done to get round 60 or so, you know most of their traits. If you're bigger and you've got better staff, they'll be able to tell you.”

Even if Hughes has been made twitchy through the challenges, his willpower is robust. He had pledged to his late father Dessie that he would stop smoking when the riding was over and he achieved it by going cold turkey. Instead, he mainlines coffee between duties.

“I was in Australia, India, worked for Henry Cecil and a good bit for Sir Michael Stoute, so I've seen bits and bobs from everyone,” he said. “Training's not as complicated as people think–you can make it so if you want–but if they're healthy, eating and happy, it's not rocket science. Running the business is 10 times as hard–keeping owners happy, getting owners in the yard and that's the bit I struggle with. At the time I was 30 say, I wanted to train horses, and I said to Lizzie before I went out to be champion jockey, that if I made it it'd stand me in good stead. That's why I went from riding to training the following week, I wanted to keep that name in lights.”

Hughes concluded, “Then you go three years not training Saturday horses you start to think, but I've enough belief that I know I'm going to come out the other side, that it will happen.”