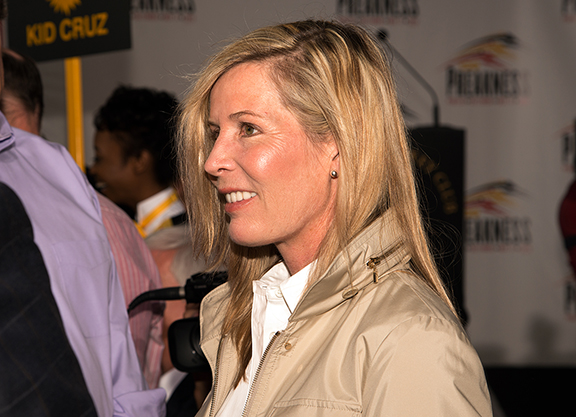 The previously levied three-year license revocation and $50,000 fine against trainer Linda Rice went into effect  Monday, the New York State Gaming Commission (NYSGC) announced. According to published reports, Rice will request a temporary restraining order to try and get the revocation stayed pending a court review of the NYSGC's ruling.

On May 17, Rice had her training license revoked for a period of “no less than three years” and got fined $50,000 when NYSGC members voted 5-0 to agree with a hearing officer that Rice's  years-long pattern of seeking and obtaining confidential pre-entry information from New York Racing Association (NYRA) racing office workers was “intentional, serious and extensive, and that her actions constituted improper and corrupt conduct…inconsistent with and detrimental to the best interests of horse racing.”

Rice had testified during eight days of NYSGC hearings late in 2020 that she had handed over cash gifts amounting to thousands of dollars at a time to NYRA racing office employees between 2011 and 2015.

Ironically–considering the circumstances of Rice's case–that entrant was named Inside Info (Mission Impazible).

Rice's attorney, Andrew Turro, did not respond to TDN queries prior to deadline for this story. But he told The Blood-Horse that a stay will likely be filed in Schenectady Supreme Court and that she will fight the case until all of her legal avenues of appeal have been exhausted.

“We are very troubled by the commission's determination with respect to the racing office information issue because it is incorrect in a number of material respects,” Turro told The Blood-Horse. “We will seek judicial review of the order as soon as humanly possible and we expect to be heard in court this week on a stay application.”

Rice has six horses total entered to race at both Belmont Park and Finger Lakes later this week.