Ribchester's Ruthin Prevails in the Limestone 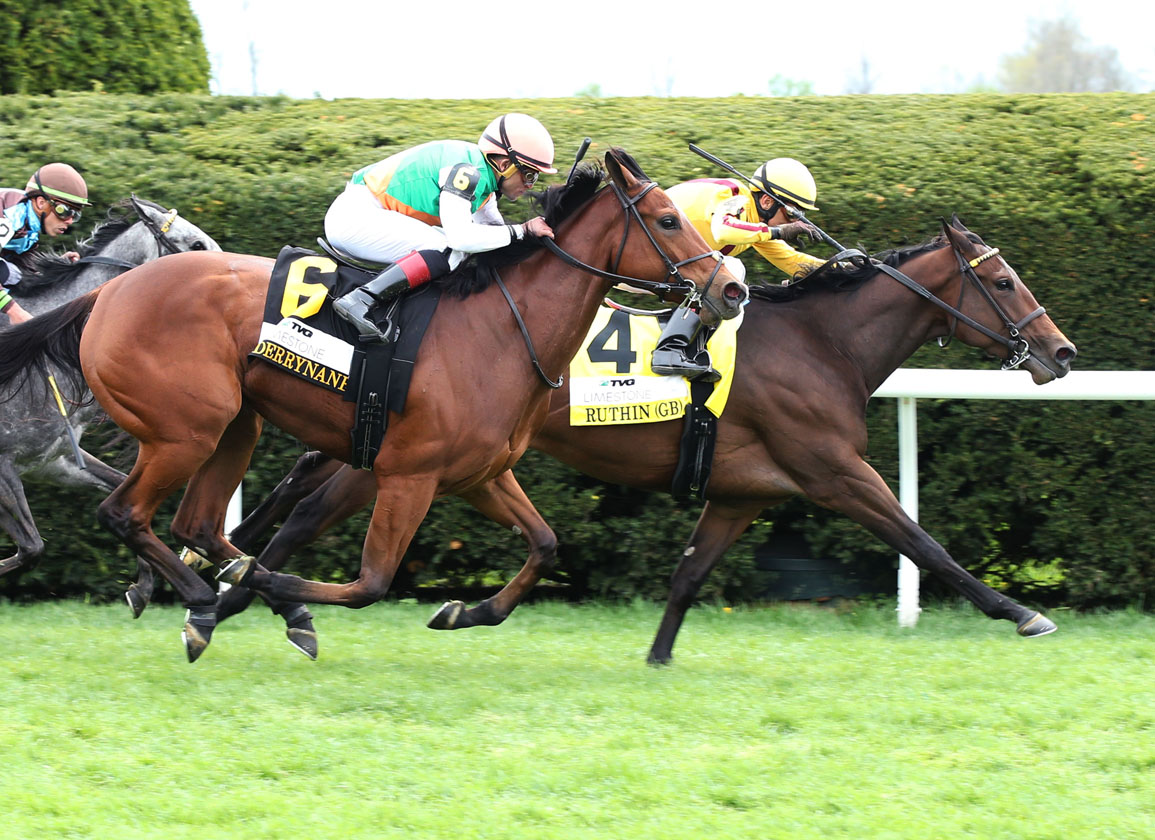 Ruthin lasts in the Limestone | Coady

Ruthin (GB) (Ribchester {Ire}) led home a 'TDN Rising Star' 1-3 finish in Friday's co-featured TVG Limestone S. at Keeneland, as she turned away a bid from her pace-pressing and favored stablemate, fellow 'Rising Star' Her World (Ire) (Caravaggio) and held off a late dive from Derrynane (Quality Road) for a narrow victory.

So quickly into stride that jockey John Velazquez reported post-race that he surged back in the irons, Ruthin, a six-length graduate in a course-and-distance maiden 51 weeks ago to become the first winner for her sire, cut out the running, but was kept in about the four path through an opening couple of furlongs in :22.59. Fractionally closer to the fence as they raced around the turn, Ruthin held the advantage, but there was plenty of room at the inside for stablemate Her World–herself a debut victress against the boys in the Tyro S. at Monmouth last August–if good enough when push came to shove. Try as she might, the gray filly just could not bridge the gap and the wire came in the nick of time for Ruthin. Derrynane, a late-running fourth to Stonestreet's Twilight Gleaming (Ire) (National Defense {GB}) in last year's GII Breeders' Cup Juvenile Turf Sprint, switched off at the back, was produced in upper stretch and attacked the line hard to just miss.

Seventh of 27 as the 3-1 favorite in last year's Listed Windsor Castle S. at Royal Ascot, Ruthin could return to that meeting, pending a dinner discussion with Barbara Banke, trainer Wesley Ward said.

The second stakes scorer for her G1 Prix Jacques le Marois and G1 Queen Anne-winning sire (by Iffraaj {GB}), Ruthin was the most expensive of the Darley stallion's first-crop yearlings when hammering to Ben McElroy on behalf of Stonestreet for 350,000gns at Tattersalls October in 2020. The dual stakes-winning Selinka is also the dam of a yearling colt by G2 Richmond S. hero Land Force (Ire) (No Nay Never).