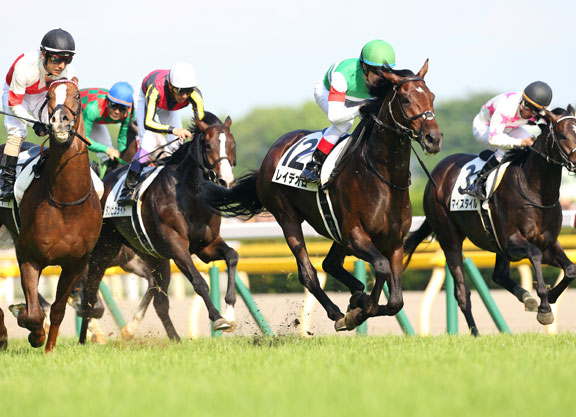 Rey de Oro (Jpn) (King Kamehameha {Jpn}), whose five wins from eight career trips to the post include the 2017 G1 Tokyo Yushun (Japanese Derby), has been confirmed for a run in the US$6-million G1 Dubai Sheema Classic at Meydan Mar. 31, according to a report on the Japanese-language Yahoo! website.

The Carrot Farm colorbearer, perfect in three starts at two, including the G2 Hopeful S., was the 3/4-length winner of the Derby last May (video, gate 12) and added the G2 Kobe Shimbun Hai (video, gate 8) in September. A staying on second to Cheval Grand (Jpn) (Heart's Cry {Jpn})–with future Horse of the Year Kitasan Black (Jpn) (Black Tide {Jpn}) third–in the G1 Japan Cup, Rey de Oro was the 3-5 favourite for the G2 Kyoto Kinen Feb. 11, but could only manage third in what was to be a Sheema prep (video, gate 6). Trainer Kazuo Fujisawa was non-committal following that effort, but reports are that the 2017 champion 3-year-old colt has pulled up well and will press on to the desert. Christophe Lemaire, who was suspended for the Kyoto Kinen and was replaced by Dario Vargiu, will be back in the irons in Dubai.