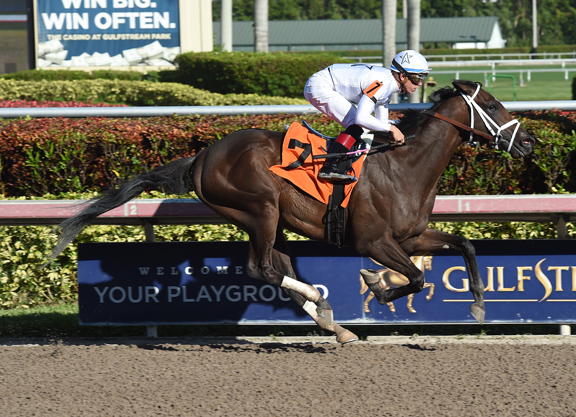 When hip 59, a filly from the first crop of multiple graded stakes winner Revolutionary, takes to the Del Mar track during Monday's training preview of the Barretts Spring 2-Year-Olds in Training Sale, she'll be taking along a notable update. The youngster, out of Noble Maz (Storm Boot), is a half-sister to recent GII Louisiana Derby winner and 'TDN Rising Star' Noble Indy (Take Charge Indy). She was purchased for $10,000 last fall at the Keeneland September Yearling Sale by Jose Zulaica.

“It does feel good,” Zulaica said of going into the Barretts sale with a half-sister to a recent graded stakes winner. “It's what you look for and sometimes you get lucky.”

Zulaica was originally attracted to the filly because of her dam, multiple stakes winning Noble Maz (Storm Boot).

“She came in kind of late in the sale,” Zulaica recalled. “She was hip 3339 at Keeneland, but she's out of a stakes mare that had won $324,000. So that's what made me follow her into the ring. I followed her up to the ring, but I didn't think I was going to buy her that cheap. Revolutionary is a new stallion, so that might have had something to do with the price, but I was surprised with her stakes-winning mare that she didn't bring more. It makes you think, well what's wrong with this. But there was nothing–a straight A scope, everything was all there, she was clean.”

It wasn't until after he acquired the filly that he started to learn about the dark bay's half-brother.

“After the sale, I started doing some research and I found Noble Indy and I found out [Todd] Pletcher was training him,” Zulaica said. “So that made me feel better. Then I saw him win his first race and I said, 'Whoa!'”

Noble Indy followed up his maiden score with a Rising Star performance in a Jan. 11 allowance. After finishing third in the GII Risen Star S., he was a gritty winner of the Louisiana Derby in just his fourth lifetime start.

“I thought he was done on the turn there for a second,” Zulaica said of the Louisiana Derby performance. “Then I couldn't believe he came back. He showed so much heart.”

Zulaica decided to keep his Revolutionary filly a few extra months with an eye towards the Spring sale.

“I bought seven horses last year,” he said. “I had them at Oakmont Ranch with Gary Broad and Scott Hansen his trainer. They broke them for me. I kept asking the riders, 'What do you feel?' The filly was the last one that came in on the truck, so she kind of got left behind. When they started her, the exercise rider said, 'This is the best one.' So I left two, I left a Graydar filly that I have and the other five were sold at Barretts January.”

Waiting for the 2-year-old in training sale brings extra risk, according to Zulaica, but also has its rewards if the timing is right.

“Too risky–it's too risky to put them in harder training,” Zulaica said of his decision to sell the majority of his yearling purchases in January. “If you don't make it to the 2-year-olds in training sales, you're going to have to race the horse. So I just wanted to clean up and feel the waters. Things are not easy as it is right now, but we did very well. They were very well broken by Oakmont Ranch. And I've been getting a lot of compliments.”

The 68-year-old Zulaica, active on the car auction scene, has been involved in horse racing for decades.

“I was born here and I grew up in Mexico, in Tijuana,” Zulaica said. “I used to go to the old Caliente racetrack. I started there. At one point I stood Woodland Pines at stud. But in the '70s there was a crunch which caused a big exodus of people going to Arizona and Oregon. And I had to sell all of my horses, so I got out. I came back and I've been playing around the last 20 or 30 years. Now that I'm a little older, I'm going to get into it full time.”

Zulaica's main focus is on reselling, but he does maintain a small racing stable.

“I've realized if you're going to run, you better run California-bred horses and stay away from the Kentucky horses,” he said. “These rich guys, they pay a lot of money for these horses and it's going to be hard to beat them.”

Zulaica credits his years of experience in the car auction arena with helping him at horse sales.

“That's where I get my knowledge of auctions,” he explained. “You develop a sixth sense when you get into an auction. And then I have some rules that I use when in doubt to pass and the experience of 45 years in the car business. It's tough when you buy cars or horses at auctions, though. You don't know what you've got until you get them out.”

So far, Zulaica's Revolutionary filly has done everything right.

“She does everything, she changes leads, she does everything very easy and very well,” he said of the juvenile. “She's very smart, no problems at all. She is one of a kind, not just because she's mine. Her attitude is great and I haven't had any problems with her at all.”

The filly will be consigned to the Barretts sale by Adrian Gonzalez's Checkmate Thoroughbreds.

“Adrian is in love with her,” Zulaica said with a smile. “I hit Del Mar at 6:30 in the morning and he'd already taken her out. But he has a smile on his face when it comes to this filly. We sold the highest-priced horse in January and I think this is going to be our gravy.”