Return of an Empire Maker 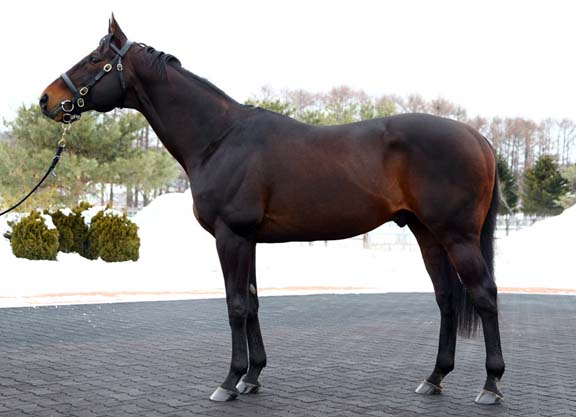 The aptly named Empire Maker, whose Triple Crown-winning grandson American Pharoah is represented by his first crop of weanlings this year, has a milestone of his own as the first foals bred since his repatriation from Japan sell at the bloodstock sales in Lexington this week. The 17-year-old stallion, who has stood the last two breeding seasons at Antony Beck's Gainesway, had a pair of weanling fillies catalogued at Monday's Fasig-Tipton November sale and an additional six weanlings catalogued at the Keeneland November sale, which starts Tuesday.

While in Japan, Empire Maker's stature in the U.S. continued to rise. The stallion was represented by two-time GI Breeders' Cup Distaff winner Royal Delta, as well as four-time Grade I winner Emollient and Grade I-winning millionaires Bodemeister–sire of this year's Kentucky Derby winner Always Dreaming–Mushka, Acoma and Grace Hall.

Empire Maker is also the sire of two-time Grade I winner Pioneerof the Nile, who in turn is sire of, not only American Pharoah, but also Airdrie Stud's red-hot Cairo Prince, whose first-crop yearlings have averaged $150,786 in the sales ring this year. Pioneerof the Nile is also sire of 2016 champion juvenile Classic Empire, who begins his stud career next year at Ashford Stud.

The Solari family's Chilean-based Don Alberto Corporation, which purchased the former Vinery in 2013 and systematically built up an impressive broodmare band in the following two years, pulled the trigger on returning Empire Maker to the U.S. in 2015 and chose Gainesway to partner with on the stallion.

“I was contacted by George Mundy of Don Alberto,” Gainesway's Michael Hernon recalled of the origin of the deal. “He called me up out of the blue and asked me where I'd be in 20 minutes and I said, 'In your office.' He said, 'That's the right answer.' I had three meetings with them and the identity of the horse wasn't revealed until the second meeting. I had kept Antony apprized on everything and the meetings went well. And Antony struck a deal with Don Alberto principal Carlos Heller.”

Hernon continued, “Don Alberto was buying the horse and bringing him back, but they don't want to stand stallions. They were making the investment in the horse and then they were looking for a 50% partner. I think their knowledge of Gainesway's reputation and history of standing successful stallions had us well-positioned to partner with them.”

In advance of Empire Maker's arrival in Kentucky, Hernon made a reconnaissance trip to Japan.

“I went to Japan in July of 2015, in the company of Noaya Yoshida, DVM, of Winchester Farm,” Hernon said. “We went to the select sale and then spent a week travelling around Hokaido to see many yearlings and foals by Empire Maker. And we went to the foal sale where I purchased two colts by Empire Maker.”

Empire Maker, who stood the 2017 breeding season for $85,000, has been an in-demand commodity at the Lexington nursery.

“Demand has been excellent,” confirmed Hernon. “Both partners have heavily supported the horse and plan to do so again next year. We do limit his book to 130 mares. He's very fertile, but we recognize that he's turning 18 and, by limiting the book, breeders have easy access to the horse when their mares are ready and the numbers help protect the asset, namely Empire Maker. That simultaneously protects the customer base. We try to have a balance within the book of end-users and market sellers, so we don't have a huge supply of the product on the market, which would dilute the return.”

Gainesway will consign four of the six weanlings by Empire Maker catalogued at the Keeneland November sale.

“Antony has bred many of his best mares to Empire Maker and I'm sure we'll be selling quite a few nice ones,” Hernon said. “We'll retain a filly or two for the racing stable, but our general policy is to bring our yearling crop to the auction arena and we're not sitting back and keeping the best ones in-house.”

Included in Gainesway's group slated to sell next week is hip 829, a colt out of stakes-placed Bagatelle Park (Speightstown).

“He is really a chip off the old block, this guy,” Hernon said of the weanling. “He is so like Empire Maker, he's almost marked identically up around the head. The mare is a good stakes placed daughter of Speightstown and it's the family of Grade I winner Seattle Smooth.”

Also on offer next week at Keeneland is hip 294, a filly out of stakes winner and graded placed Namaste's Wish (Pulpit) who is consigned by Burleson Farms.

“I looked at that filly this morning in Versailles,” Hernon said. “She's an absolute rock star, a knock-out physical. She's a terrific filly, I was really impressed with her. There is a lot of Unbridled in her. She is big and elegant and she has great quality. If she comes with a good vet report, those guys are going to have a really good sales horse there.”

In addition to the success of his sons at stud, Empire Maker is gaining a reputation as an outstanding broodmare sire and is the covering sire of three Book 1 mares at Keeneland. His daughters have produced the likes of graded stakes winners Takeover Target (Harlan's Holiday), Polar River (Congrats), Outwork (Uncle Mo), Timeline (Hard Spun) and Arklow (Arch).

That combination will make for a potent force in the sales ring, according to Hernon.

“Empire Maker is influential on the male side through all these horses we're talking about, like Pioneerof the Nile, Bodemeister, and his colts will appeal to the market to become potential stallions themselves. This is a very vibrant male line, it's very influential and it's highly commercial.

Empire Maker's return to Gainesway completes a circle of sorts for the stallion.

“Toussaud was bred by Unbridled to create the mating that resulted in Empire Maker when Unbridled stood here at Gainesway,” Hernon said. “His second dam is Image of Reality, a graded stakes winner by In Reality. In Reality stood here in the later part of his stallion career and is buried 50 feet away from my office.”

Empire Maker is in good company at historic Gainesway, which is also home to leading sire Tapit. The stallions are the latest in a long line of impressive names to grace the farm's roster.

“You've got Blushing Groom, Irish River, Broad Brush, Cozzene, and the list goes on of all the significant successful horses that Mr. John Gaines put together in his time and tenure here at the farm under the guidance of his farm manager Joe Taylor,” Hernon said. “We are trying to carry the baton and keep the place vibrant. Empire Maker was a very big addition and an endorsement of the farm and he added to the perception of Gainesway as being home of great stallions. And of course, led by Tapit, Empire Maker is in good company.”

As Empire Maker's first crop of foals since his repatriation get set to go through the sales ring this week in Lexington, it's hard not to be impressed with the prescience Juddmonte showed when naming its future Classic winner.

“It's remarkable that he turned into this kind of influential stallion on the breed,” Hernon said. “I'm not sure at what stage Juddmonte elected to name him Empire Maker, but they sure hit the target with that. He's clearly become an 'empire maker' in his own right.”