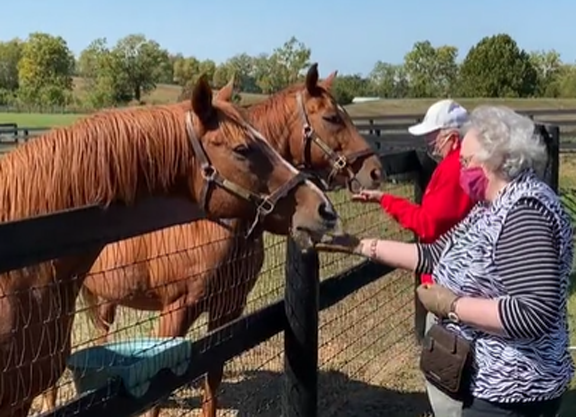 As soon as Bev Passerello retired as a riding instructor, she and her husband John sold their home in California, bought an RV and traveled the country. At some point along the way, they ended up in Louisville on the first Saturday in May.

“After I saw the Kentucky Derby for the first time, every trip back and forth across the United States went through Kentucky,” Bev said. “John finally said, 'I give up, it looks like we're going to move to Kentucky.'”

So they parked their motor home in the Bluegrass State for good, bought a broodmare and got in on a few racing partnerships, and fell in love with the people and Thoroughbreds of Central Kentucky.

Last year, they were looking for a senior living residence where they could receive some assistance but still live independently when they came across Ashton Grove Senior Living in Georgetown.

For Bev, horses were the only thing missing from the picturesque community. When she discovered that half of Ashton Grove's 80 acres were unoccupied and on part of the old Hill 'n' Dale property, an idea began to form.

John and Bev reached out to Michael Blowen, the founder and president of Old Friends.

“We had been associated with Old Friends for quite a while,” John said. “I knew that every once in a while, people offer horses to Michael, and he doesn't have the room. So we made a phone call to Michael, and he said, 'Sounds great.'”

The partnership between Ashton Grove and Old Friends quickly formed, and the team got to work with the dream of creating a unique arrangement where retired Thoroughbreds could interact with the residents at the senior living community on 40 acres of land that features eight paddocks and a 12-stall barn.

“We're so fortunate that we had this barn and all of this land,” said Ashton Grove's Executive Director Davonna Saeir. “We went ahead and started to fix up some fences so we could get horses out here.”

The plans were brought to a halt this spring due to the pandemic.

“Just after we got started, the Coronavirus set in and the whole thing just sort of started falling apart,” Bev said. “But Davonna and Michael have never given up and have never failed to support us and what we were trying to do.”

“We wanted to find horses that were really good together and had a gentle nature to them so that they could be around the residents,” said John Bradley, who will serve as manager of the new Old Friends facility, helping to acclimate the senior residents with their new equine neighbors and overseeing the daily care of the Thoroughbred retirees.

Blowen was effusive in his praise for the new program.

“It's all worked out really well,” he said. “The residents all seem to be very supportive. They're learning about the horses and we're going to have lunches and parties here.”

Blowen said he plans to have celebrity guest jockeys, trainers, and other industry participants visit to educate residents about horse racing and the Thoroughbred industry in central Kentucky.

The Passerello's have been involved in every step of the process as they live on-site in independent living. Bev said that this gives them the opportunity to introduce other residents to the new equine seniors in their community.

“How do I feed a horse? Can I come down in my wheelchair? Will they get to know us? The questions are ongoing,” she said. “But a lot of them have had to give up their animal companionship. A lot of them have lost loved ones. To have these creatures down here has been very rewarding for them. It's been a spectacular personal achievement for us to be able to bring these residents down here. It's just what we dreamed would happen.”

Tom Emerson has been a resident at Ashton Grove for five months and has quickly developed into one of the program's biggest supporters as he stops by the paddocks daily to distribute carrots.

“It's been a wonderful experience,” he said. “I grew up in cities and had never been this close to a horse before. I had never fed a horse before and I'm glad he took the carrots and not my fingers. I hope these horses enjoy Ashton Grove as much as I do. When my wife passed away, I was looking for a great group of people for company and I found it. Now I've got a great bunch of horses to be with too.”

Ashton Grove's Saeir said that visiting the horses at Ashton Grove has been rejuvenating for many of the senior residents.

“A lot of times when someone moves into assisted living, they've gone through a lot of loss,” she said. “They've lost their spouse. They've lost their vitality. Oftentimes they've lost their ability to drive and do things that really were meaningful to them. But these horses are part of their heritage. It's just another aspect of true home and comfort that they are able to get by living here.”

Saeir added that as many of the normal community activities have been canceled due to the ongoing pandemic, the ability to be outside and interact with the horses and other residents has been a bright spot for many of Ashton's Groves members.

“It's fun to see, because I'm already starting to see some unique friendships start between some of the staff and the residents with some of the horses,” said Bradley. “This is just the beginning. Over time, we figure to have about 30 horses in this facility.”

Already in the first few weeks of operation, Old Friends at Ashton Grove has received inquiries from other senior living communities in Kentucky and beyond.

“There's been a lot of interest in the concept,” said Bev. “We're getting a lot of people talking to us now. I think it will become a model, I truly do, because there's been so much interest.”

John added, “More Thoroughbreds need to be saved, so if this can happen in other places it would be great for the horses and for the senior citizens.”