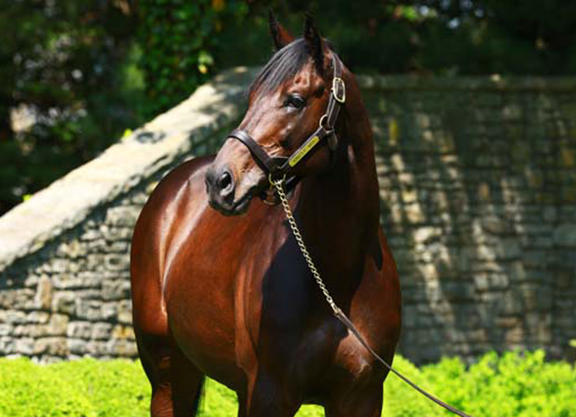 Dr. Mike Cavey and his wife Dr. Nancy Temple have proven the old adage of quality over quantity. At their Respite Farm in Paris, Ky, the couple have been able to do a lot with a little, producing two champions and a Grade II-winning top young sire from a broodmare band of just seven. They will offer four weanlings from their boutique breeding operation at the upcoming Keeneland November Sale.

Cavey and Temple hit their first home run with a family they developed for five generations out of the first mare they ever purchased, Hot Slippers (Rollicking). Their patience and commitment to those bloodlines paid off as Hot Slippers is now the fourth dam of champion and top sire Uncle Mo.

Standing at Darley, Nyquist is the leading first-crop sire by black-type winners, producing two Grade I scorers in his initial crop. Laoban is number three on that list and also has a top-level winner already thanks to GI Darley Alcibiades S. victress Simply Ravishing. He started his career in New York at Becky Thomas' Sequel New York, but will relocate to WinStar Farm in Kentucky for 2021.

“We've been lucky,” said Cavey, who also bred champion Champagne Room (Broken Row). “We were hoping Laoban would come back to Kentucky. We hope to be able to breed to him.”

Cavey and Temple have, of course, supported Uncle Mo at stud. For example, they bred the dam of Champagne Room, Lucky To Be Me (Bernstein), to the leading stallion and sold her to Japan's Katsumi Yoshida for $1.25-million at the 2017 KEENOV sale.

In addition to breeding to Uncle Mo, Cavey and Temple have also supported his sons. In fact, one of their top prospects heading to the Keeneland November sale is a daughter of Nyquist.

Hip 943 is out of Cayman Sunrise (Petionville), who is a full-sister to MGSW Sailors Sunset and MSW Sailor's Sister. She is also the dam of SP Empire Power (Bodemeister).

“We have a Nyquist who is exceptional,” Cavey said. “She is a really, really nice filly. She is a half to a Bodemeister stakes horse we bred and raised. She may be as good as anything I've ever bred.”

Cavey was equally enthusiastic about Hip 1572, a daughter of Liam's Map. She is out of the Giant's Causeway mare Rooms, who is a half to SW Congo Kaye (Congaree) and GSP Westwood Pride (Pleasantly Perfect).

“We also have a Liam's Map filly out of a Giant's Causeway mare we bought as a broodmare prospect,” Cavey said. “It is a toss up as to which of those is the best. Sounds crazy, but I'd put either one of them up against Champagne Room, Uncle Mo or anything I've ever bred.”