Rescues Unite to Weather the Storms 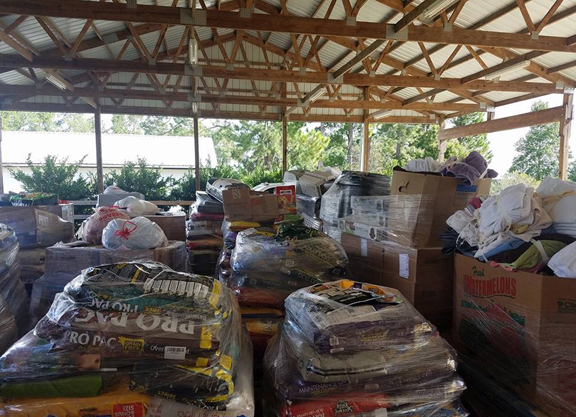 First Hurricane Harvey, and now Hurricane Irma, have devastated Texas and Florida, respectively, but a spirit of camaraderie is emerging after the natural disasters as Thoroughbred rescue organizations from coast-to-coast are doing their part to help.

“When you love horses, you love all of them,” said Donna Keen of Remember Me Rescue in Burleson, Texas. “We only had a quarter inch of rain where we are located, but a just a few hours south of us was really, really bad. I think a lot of people get caught up in the thought that Thoroughbred trainers and owners only care about making money, and that's just not true. They are horse lovers, and they help everybody. When we needed it, they really came through for us.”

Keen was not in Texas when Harvey made landfall, and instead reached out to a friend who would have the contacts she required to help those most in need.

“I was in California when the hurricane hit, but I knew we needed to do something because our rescue is based in Texas,” Keen said. “I called Dawn Mellen, who is a friend of ours and who also runs After the Finish Line in California, because she has so many contacts and does a lot of fundraisers. She did not hesitate one second to say, “What do you need? What do you want to do? Let me help you.'”

Together, the two organizations held an auction on the last day of the meet at Del Mar to raise money. Jockeys Victor Espinoza, Mike Smith, and Gary Stevens were among those who autographed donated items to help increase their value.

“We ended up raising over $4,500 for the Harvey horses,” said Keen. “We are going to use that money to send hay down there, and now we are probably going to have another fundraiser to send money to horses in Florida who need help, too. I didn't have the contacts in California to be able to pull something off like Dawn did. I learned a lot from her, and I am really happy we could work with together. To have friends like that and be able to reach out is so important.”

Remember Me Rescue, which is a Thoroughbred Aftercare Alliance (TAA) accredited organization, sent its most recent load of supplies to help those impacted by Harvey on Tuesday.

“I had very few connections in Texas to figure out how to get stuff on the ground,” said Rhodes. “Through the TAA I found Lynn Reardon with LOPE, and she's out of Driftwood, Texas. I called her, and she immediately called me back and said she could help me. I trust the TAA tremendously on their accreditation policies, so I knew when I called Lynn she was on the up-and-up. That to me was instant validation.

“I couldn't have done it without LOPE. Lynn was instrumental in getting me to the right people, and she did it fast. She got me in touch with the Austin Equine Hospital, and they told me they needed supplies, and they could put it where it needed to be.”

All told, Equine Rescue of Aiken has coordinated eight loads of supplies that went to four different drop points in Texas.

“After Harvey hit, I had a couple loads of hay, shavings and vet supplies donated,” Rhodes said. “The rescue was planning on sending about three truck loads out, and raising trucking money is what I was looking for. Donations pretty much covered that, but then it grew to a bigger need than just three truck loads.

“We were one of the first people that had supplies there. The truck drivers were getting hugged by ranchers, farmers, and horse owners. Even a goat guy came up, and the guy running the drop off point called to ask if he could give him 10 bales of hay. He told me that was all he is asking for. I said, 'If he is asking for 10, give him 20. Don't let any animal starve.'”

Rhodes currently has truckloads of supplies organized and ready to be sent to Florida, but he is waiting for approval from the state to be allowed to enter. Another major issue is balancing the needs of horses in immediate danger with the day-to-day responsibilities of Equine Rescue of Aiken.

“My biggest problem is the financial resources to get the supplies there,” he said. “We are a rescue, and while we are financially secure, I can't take my donors' money away from what it was donated for, which was to run the rescue. I have to have extra resources. I have access to plenty of great hay, but the biggest problem is the trucking expenses. It was anywhere from $2,500-$4,000 to get trucks to Texas.

“I made a commitment with our board when Harvey hit. We agreed to lose some money if we had to. We actually only went in the hole about $2,700. That's not bad, and I was very impressed with that. I want to do the same for the animals affected by Irma, but I need some help. If I can send 8-10 trucks to Florida, that is only a small amount, but it is what we can do to help.”

Another way Rhodes is prepared to help is by filling the 15 empty stalls he currently has with adoptable horses from TAA-accredited organizations in Florida. The Aiken rescue is also an accredited “Safe Stall” facility through the Humane Society of the United States, which helps horses rescued from neglect cases and during natural disasters.

“I plan on reaching out to say I can take adoptable horses,” he said. “I am up and running. I can get them adopted and take some of that financial responsibility away while they are getting their feet back on the ground. I thought I was done, but there is a huge need out there.”

Obviously, these are just two examples of rescues combining resources to help those impacted by the hurricanes. Others have also donate supplies, while some, such as fellow TAA-accredited organization Our Mims Retirement Haven in Kentucky, have contributed financially.

However, both Keen and Rhodes emphasized the fact the amount of work it will take to make land fit for animals again is staggering, meaning help will be required for months to come.

“We are trying to set up individual hubs for people that did evacuate so they can come get their hay, and then in the next week or two, we will be sending the hay back to Houston,” said Keen. “People are going to go home, and the horses won't be able to eat the grass for a long time because of the sewage and trash. The pastures will all be contaminated.

Rhodes echoed those thoughts, saying, “While people are definitely suffering, we have, in general, done a pretty good job of helping them. In the last couple years, we have also improved our small animal policies. You are encouraged now to take your small animals, whereas before they wouldn't let you take them. But we haven't done a good job with what we do with large animals and livestock ahead of these storms.

“We don't have a system in place to protect them,” he continued. “The best we can do right now is get in as soon as possible and bring them the resources they need and try to mitigate the damage. A lot of these ranchers have lost their livelihood. A lot of this land is not going to be suitable for a long time because of the brackish water. We are each trying to help, even if it is in a small way, and we are trying to make a difference. I think we all know that is what we are supposed to do.”