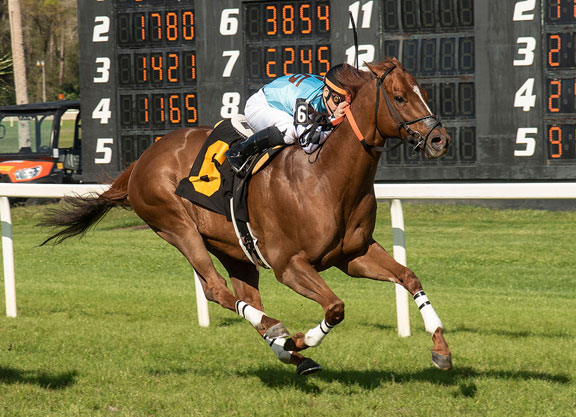 Florida-based trainer Georgina Baxter has been suspended 25 days and hit with a $7,500 fine after three of her horses tested positive for two non-steroidal anti-inflammatory medications, according to a report in the Daily Racing Form. The suspension began Feb. 24 and will run through Mar. 19.

According to documents from the state's racing regulatory agency, the Florida Division of Business and Professional Regulations, 10-year-old Trev (Exclusive Quality), 11-year-old Blings Express (Too Much Bling) and 6-year-old Fallen Leaf (A.P. Warrior) were found to have excessive amounts of the anti-inflammatories flunixin and phenylbutazone in their post-race samples from recent starts.

The penalties were violations of the “stacking” variety, wherein horses are not allowed to have more than one NSAID in their system at once. DRF reported that Baxter has been fined for similar stacking infractions in the past, and that if she has a similar violation in the next year, she will receive a 60-day suspension.

Baxter, a former exercise rider who took over much of trainer Ralph Ziadie's business after he was denied a training license in 2018, won 47 of 160 races in 2019 for a hit rate of 29% and earnings of nearly $1.4 million. She started 2020 with eight wins in 26 starts and $234,750 in earnings before her suspension, and her top clients include Averill Racing, Silver Oak Stable, CCF Racing Stable and Matties Racing Stable. She recently saddled 7-year-old Faction Cat (Wildcat Heir) to a course-record setting performance in winning the Turf Dash S. Feb. 22 at Tampa.