Home » Archive » Shared News » Repole Keeping His 'Wits' About Him

Repole Keeping His 'Wits' About Him 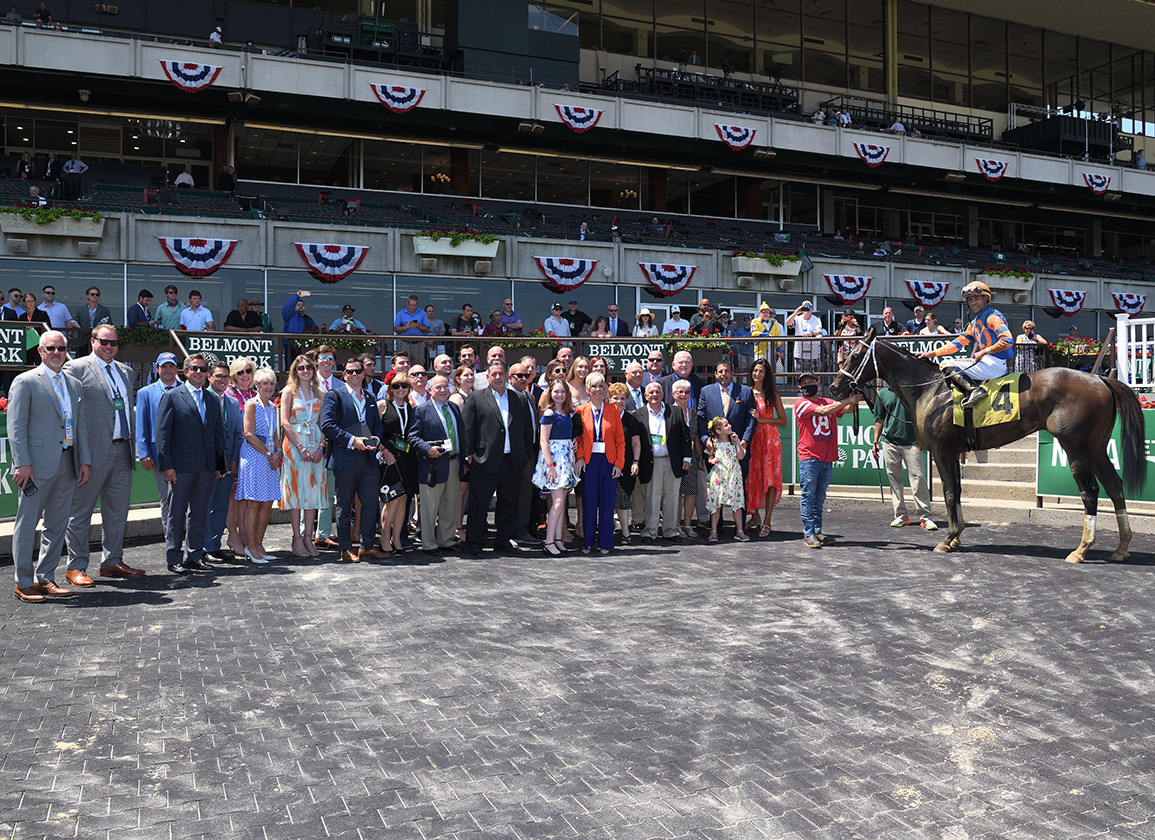 Well, if the scene in the winner's circle following the eye-catching unveiling of 'TDN Rising Star' Wit (c, 2, Practical Joke–Numero d'Oro, by Medaglia d'Oro) after a tardy start in the blockbuster card's 11:35 a.m. lidlifter was any indication, NYRA may have to start constructing a larger enclosure.

“I had six horses running on Belmont day and had 50 family and friends there,” Repole said. “Here he is at 2-5 and eighth after spotting the field seven, eight lengths. I was about to go back to my car and just go home.”

It's a good thing he stayed.

Last of eight from post two and immediately under a busy ride from Jose Ortiz in the 5 1/2-furlong affair, the 2-5 favorite began to launch on the far turn, remarkably got himself into striking distance in a three-wide third passing the quarter pole and turned on the afterburners from there in the stretch, rolling home a six-length winner. He earned a 70 Beyer Speed Figure for the effort. Wit is currently being aimed at the GIII Sanford S. on opening weekend at Saratoga July 17.

The $575,000 Keeneland September sale purchase, the most expensive of 74 yearlings to switch hands from the first crop of the highly regarded Practical Joke, is campaigned in partnership with the Viola family's St. Elias Stable and Antony Beck's Gainesway Stable. He is trained by Todd Pletcher.

“He's just really special,” Repole said. “To see a first-time starter do that is incredibly impressive. We knew that he was talented. He was the best horse on the farm when he was at Stonestreet, and when Todd got in 20 or 30 2-year-olds, by far he separated himself. We loved him when we bought him. If he was by Uncle Mo or Curlin, he might've gone for $1.5 million. He was that good looking. He's done everything right so far and hasn't missed a step. You just cross your fingers and pray.”

Repole continued, “I've had horses like Uncle Mo break their maiden and win by 14 1/4 lengths wire to wire, and I thought that probably was one of the most impressive maiden wins I've had. But the way this horse just broke so slow, took dirt in his face, circled the field going 5 1/2 furlongs and pulled away… I wonder, what happens if he broke? What would've he done then?”

“To own this horse with Vinnie and Teresa [Viola] that we've had so much success with, we're really building on top of our incredible friendship, a great partnership,” Repole said. “We also decided to partner on a couple of horses at the September sale with Alex Solis II and Antony Beck at Gainesway. This is our first horse together and we met in the winner's circle. So there you go. It's a good start. We're all very excited.”

With an impressive roster of former Repole standouts turned stallions led by top sire Uncle Mo ($175,000 stud fee; Ashford Stud); Vino Rosso ($25,000; Spendthrift Farm); Outwork ($15,000; WinStar Farm); et al., is the co-founder of Glaceau (the company was sold to Coca-Cola for $4.1 billion in 2007) just minimizing some risk by taking on partners with his runners going forward?

“Some people say that,” Repole replied. “Are you looking to share your risk? I don't know. When I used to buy all my horses at 100%, I'd spend $4 million. Now at 50%, I'm spending $6 million. So I don't know if I increased or decreased my risk. Depends how you look at it. At the end of the day, the game has evolved a lot with partnerships. I try to be very selective of who I partner with. I want to partner with people that I enjoy and people that I like. People that after we win, we could go out to dinner or come back to my house. Vinnie and Teresa are family. I think we have 30 2-year-olds together–that is the most ever. Honestly, I think we love the friendship more than the partnership.

He continued, “I wouldn't say less risk. I would actually say, more chances. How's that sound? Instead of 30 at 100%, you have 60 at 50%. I think it's more fun. I also buy a lot of horses by myself and breed my own, too. And the stallion game, that's been interesting. The first great horse I owned turned out to be a great stallion. And I know that doesn't always happen. Just because you're a great horse doesn't mean that you're going to be a great producer. Now that I've been in the game at a high level for over 10 years, it's fun to have an Uncle Mo out of Nonna Mia (each raced by Repole) turn out be a Derby horse like Outwork. It gives it a great feeling. He's been doing pretty well [at stud], we have Vino Rosso with Spendthrift and I've also invested in City of Light, West Coast and Accelerate.”

The Phipps Stable-bred Dynamic One (Union Rags), a $725,000 Keeneland September yearling purchase and narrow GII Wood Memorial S. runner-up, brought together Repole and St. Elias with the Phipps family for a trip to this year's GI Kentucky Derby. Overtook (Curlin), a $1-million KEESEP graduate campaigned by Repole, St. Elias, Michael B. Tabor, Mrs. John Magnier and Derrick Smith, failed to build off his third-place finish in the GIII Peter Pan S. and was a well-beaten seventh in the Belmont. St. Elias homebred and GI Curlin Florida Derby winner Known Agenda (Curlin) was ninth in the Derby and fourth in the Belmont, respectively.

“It's really been great to have these friends and relationships,” Repole concluded. “I think you know how special it is for me to have 50 family members come to the track with me. It's like an extra holiday. Listen, I want to win these races, but if I can run a 50-1 shot and get 50 of my family and friends together at the track, I'm willing to do it. That part is just as special as winning one of those races. As I get a little older and I realize how tough these wins are, they just get more special.”