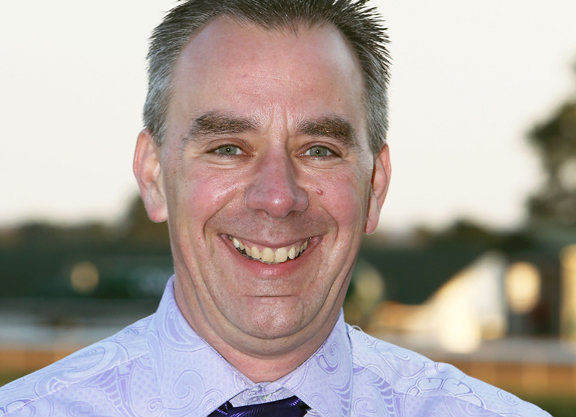 Karl Broberg got off to a quick start at Remington Park, winning the opening night feature, the $75,000 Governor’s Cup S., with Hunka Burning Love (Into Mischief). But Broberg is resigned to the fact that there won’t be many more winners for his stable at the Oklahoma track. A mainstay at Remington throughout his career, Broberg was denied stalls at the meet which opened Friday, and he says he’s yet to get a reasonable explanation as to why.

“I really wish I knew the answer,” Broberg said. “It was what I deem a very bizarre decision on their part and I have had multiple meetings now trying to get a straight answer as to why.”

Broberg is allowed to race at Remington, but said that without stalls he has cut back drastically on his division in Oklahoma and has 16 horses there at a nearby training center when he normally has about 80 based at the track. He is planning on moving most of the horses that would have raced at Remington to Hawthorne.

Broberg made 289 starts last year at Remington and finished second in the standings behind Steve Asmussen with 57 winners. He had hoped to do as well, if not better, this year until he was told he would not be getting stalls. He said the decision was made by Remington Vice President of Operations Matt Vance. At deadline for this story, Vance had not returned a phone call seeking comment.

Broberg said Vance has said little about the decision to deny him stalls, which has left him to guess what the reasons might be. He said one issue is likely comments he has made on social media about Remington and Lone Star Park, tracks owned by the same company, Global Gaming Solutions. Broberg admits he hasn’t mastered the art of political correctness and that his outspoken nature can get him into trouble.

On Aug. 19, he tweeted: “My best friend was wrong when he predicted Twitter would end my career quickly because I lack a filter. So far it has only resulted in losing stalls at a track near and dear to my heart while allowing me to share wisdom, humor, nonsense, and disgustingly self promote.”

On Twitter, he has complained a number of times about Remington’s decision to do away with main track-only entries in turf races, calling it the “Steve Asmussen rule.”

“I confirmed this morning that the no MTO entry rule change is still in place,” he tweeted. “However, I would prefer to reference it as the Steve Asmussen rule since I am focused on being positive about every venue I have the privilege of partaking in.”

He said he will try to be careful when it comes to what he posts on social media platforms.

“I will just worry about running my own barn in the future instead of trying to make the world a better place,” he said of his social media posts.

Another factor, Broberg said, could be his criticism of the local horsemen’s group, the Thoroughbred Racing Association of Oklahoma.

“They have created a culture there at Remington Park where they constantly cave to the horsemen’s organization,” he said. “It’s just strange the way that track is run. They’ve created a culture where the inmates are running the asylum. They have tendency to bow down to the trainers that have an Oklahoma driver’s license.”

Broberg, who led the nation in wins every year from 2014 through 2019, has had his problems at Remington in the past. In 2013 he was banned outright for an entire meet after The Jockey Club denied him the privileges of the American Stud Book, the result of having three or more medication violations over the course of a 365-day period. In 2017, he was fined $20,000 after his stable mixed up the identity of two horses, both of whom raced under the wrong name.

“I’ve made more than my fair share of mistakes in racing,” he said.

After being fined in 2017, Broberg was allowed to stable and race at Remington in 2018 and 2019 and he said he has done nothing since then to warrant losing his stalls.

“I am in a spot where I am the villain and I don’t get it,” he said. “My help is respectful and quiet. We keep to ourselves and do everything right. There’s always been this dark cloud that hangs over us in Oklahoma City and I don’t have that anywhere else that I run.”

Broberg said he is confident the Remington ruling has nothing to do with any medication violations.

“It’s not like we’re (Jorge) Navarro or (Jason) Servis and winning at some phenomenal rate and doing incredible things that you can’t figure out when you look at the Racing Form to see how this horse is running in such a matter,” he said.

While losing stalls at Remington has been a setback for his operation, losing them at Lone Star would hurt even more. Broberg lives in the Dallas area and stabling at Lone Star affords him more time with his children.

“I have been told there won’t be a problem at Lone Star, but I know if I cry about what’s going on at Remington too much, it will be uncertain where this could go,” he said. “To not have stalls at Lone Star would really pain me because that is home to me. It’s my chance to do what I love while being able to stay home with my kids.”

Broberg, who is second in the nation in wins this year behind Asmussen, still has plenty of outlets for his horses. That’s not a problem. He is also currently racing at Louisiana Downs, Canterbury Park, Evangeline Downs and Prairie Meadows. He said he is ready to move on and accept the Remington decision, even if he doesn’t understand it.