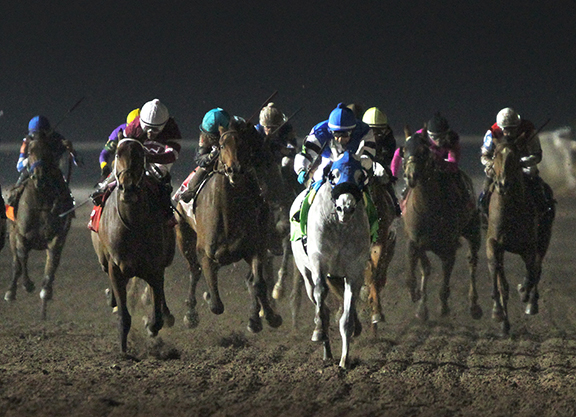 From the Thoroughbred Idea Foundation:

Horseplayer Jeff Arthur structured several non-overlapping tickets playing Remington's Sooner 6ix bet Friday, Apr. 10, 2020. One ticket, costing him $403.20 and including 2,016 combinations, was entered via Arthur's ADW account. An image of the ticket can be found here.

Arthur received consolation payouts totaling $8,920, which was the total amount of that night's minor pool, and which confirms his was the only ticket that had all six winners.

“At first, I was a bit disappointed when I saw what went into my ADW account, knowing that I didn't win the jackpot pool, but then once I saw the chart which outlined the pool amounts and did the math, I realized I had the only winning ticket, and was infuriated. It had to be a mistake,” said Arthur.

Remington Park told Arthur Saturday, and his representatives today, that the occurrence of the dead heat created two separate winning tickets. Remington further affirmed that he would have won the jackpot if he used only the 5 or the 7, but using both of them created two winning combinations. Instead of landing the jackpot of $35,145, Arthur received just $8,920.

“If there was a late scratch that ended up giving me a favorite which won, and duplicated my combination, I totally get that it invalidates the unique wager. That is pretty clear and spelled out that a scratched horse gives me the favorite. But this is not that.”

Arthur was connected with the Thoroughbred Idea Foundation Wednesday, expressed his frustration and felt that his claim was legitimate, and wanted details of the case to be made public.

“We completely agree with Jeff and thought we could do more,” said TIF Executive Director Patrick Cummings. “Horseplayers need to be given a fair shake, and it was pretty clear after a review of the rules and the entire situation that he has a unique winning ticket and rightfully deserves the jackpot.

“The jackpot bets are a mess with high takeouts and limited churn–but what is worse in this situation is that tracks are incentivized to keep the jackpot rolling to get it as high as it can possibly go, so there is every belief that the 'system,' so to speak, would be against Jeff in a situation such as this. Of course, they want the jackpot to keep rolling on. There should be questions to the legality of the actions taken against Mr Arthur.

“We connected him with horse owner and attorney Maggi Moss, and then Maggi and I discussed the matter together with Remington Park management Thursday.

“We made it clear to them–Jeff was the rightful single ticket winner, there were no rules publicly available that showed anything different and he should be paid. If they did that, we would be happy to report that Remington went out of their way to do the right thing for horseplayers. It costs them nothing to do the right thing, particularly when the action is clearly wrong.”

“The horseplayer picked all six winners, he was the only person to pick all six winners and they were all on the same ticket. If either horse wins by a nose, he has it. If he picks one or the other, he has it. Its unconscionable that the track is making this judgment. There is nothing in the rules that states this should not be a unique payout. On a judgment call, the track decides to favor itself over the customer. That's bad for business, bad for horseplayers and bad for racing.”

“In a follow-up discussion today,” Cummings added, “Remington indicated they were not in a position to pay Mr. Arthur for his win, and re-asserted that he ended up with two tickets and does not get the jackpot payout of $35,145. There is no rule on the books to adjudicate this situation. Common sense says, if either horse wins by a nose, Mr Arthur wins. Remington says that if Mr. Arthur had one horse in the dead heat instead of both, he wins. But they've decided, and the tote settlement agent reports back, that he does not win. Mr. Arthur has indicated he will file a formal complaint with the Oklahoma Horse Racing Commission and pursue the matter beyond that if he does not obtain payment.

“It is sad that it has come to this, because Remington refunded all bets Saturday after they cancelled racing due to extreme weather and the original $35,145 jackpot is still sitting there tonight. Remington makes the situation even more difficult for themselves by offering the jackpot on tonight's races as customers are unaware that they could unwittingly disqualify themselves from winning the jackpot based on a rule standard that does not exist publicly.

“Their behavior is making it clear that neither Remington, nor The Stronach Group, whose technological arm served to settle this bet, are looking out for horseplayers. This should not happen, and is a banner reason for why horseplayers have left racing in droves for years and handle is down nearly 50% in two decades when adjusted for inflation.

“As a group, horseplayers have been taken advantage of for far too long and it has to stop somewhere. If a track and its agents are not willing to pay a rightful winner of $35,000, then we start to question what is happening day in and day out across this country with even more on the line?”

The Thoroughbred Idea Foundation has published several pieces (here and here) in recent weeks which questioned whether or not the Thoroughbred Racing Protective Bureau is truly executing its duties to protect the integrity of the betting markets. Earlier this week, the TIF contacted the TRPB seeking comment within 48 hours on its recently published stories, and also to offer insight it might have regarding claims of strange odds changes and pool amendments reported by horseplayers at Will Rogers Downs, also in Oklahoma.

While TRPB head Curtis Linnell acknowledged the request for comment eight minutes after it was sent, as of this publication, no comments were received.

“The technology used to process these bets is antiquated and the rule book is, at best, sub-standard,” Cummings said. “Racing in America needs evolution and modernization, and if it takes this case to start pressing the tracks on the matter, then so be it. Horseplayers cannot stand for this sort of mistreatment and horse owners should be right there with them to fight it.”