Remi Bellocq Part 1: Keeping it Light at the TDN 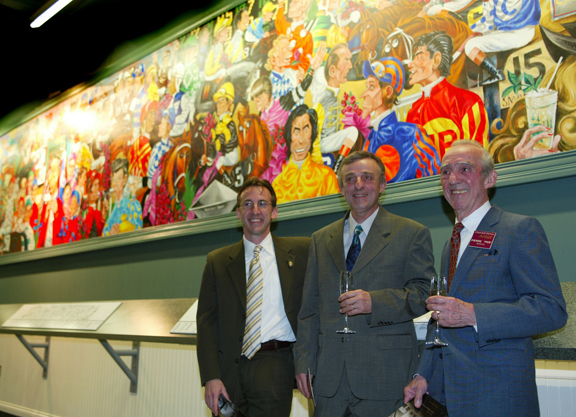 In just less than a week, thousands of Derby-goers will pass under a 36 foot-long mural in the heart of the clubhouse at Churchill Downs depicting every jockey to win one of the first 130 editions of the GI Kentucky Derby.

The hand behind this Churchill Downs fixture may be unknown to many passers-by, but generations of racing fans quickly recognize the inscribed signature–Peb.

Artwork from Eclipse winner Pierre 'Peb' Bellocq is displayed at racetracks across the country, from Churchill Downs and Keeneland to Arlington, Del Mar, Oaklawn, Belmont, Aqueduct and the Meadowlands. Last year, the cartoonist was selected for the National Museum of Racing's Joe Hirsch Media Roll of Honor.

While the renowned artist-and author of several books- has stepped away from his sketchpad for the most part at the age of 95, his son Remi Bellocq, former CEO of the National HBPA and the current executive director of Bluegrass Community and Technical College's Equine Program, is now following in his father's footsteps.

“It's kind of like the family business,” the younger Bellocq cartoonist said. “I always joke, it's kind of like if you want to be a standup comedian and having Richard Pryor or Jerry Seinfeld as a parent because, you know, how can you live up to that? So I try to kind of carve out my own style.”

Soon, Bellocq will partner with the TDN to share his work with the racing community. His first piece will appear as a prelude to Kentucky Derby weekend.

“I've got some fun ideas for Derby-themed cartoons,” he hinted. “But I'm not going to share those yet because I want to keep them a surprise.”

Bellocq said he hopes to bring a bit of lightheartedness via his new platform, even on some of racing's more sensitive subjects.

“My father taught me a really good lesson,” Bellocq shared. “He said, 'Listen, there's an envelope and you want to push the edge of that envelope. You want to make it memorable and poignant, but stop short of where it gets to be crass or insulting.' So I've tried in my work to take a position and maybe push the envelope a little, but always with the idea that if you have 10 people and five people love it and five hate it, at least everybody chuckled.”

Hailing from several generations of skilled horsemen, the Bellocq family left their home in France in the early 1950s when demand for Pierre's work was first taking off. The two eldest sons of Pierre's five children were born in France while Remi and his two sisters were born in the U.S., but Bellocq said the family still spoke French at the dinner table.

He remembers growing up in Queens watching his father's fame grow in his role as the editorial cartoonist for the Morning Telegraph and its sister paper, Daily Racing Form. 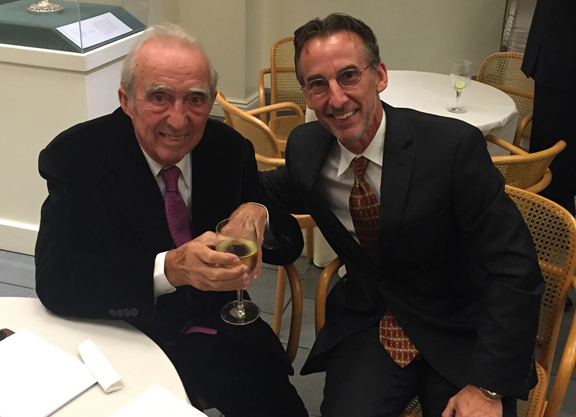 “Growing up watching him draw, my siblings and I all kind of doodled a bit at school, and I guess I kind of followed in his footsteps,” Bellocq said.

While the younger Bellocq did enjoy drawing as a hobby during childhood, he said his true passion was always for the horse.

“My first horse came over from a trainer named John Russell,” Bellocq recalled. “He was the very first person to start really worrying about where his horses went after their careers, before it became a big issue. I had my backyard horse in central New Jersey and I kind of taught myself to ride. Every day I would come back with branches in my helmet because he would just take off with me.”

Bellocq caught on quickly though, and by the time he was a teenager, he was up early in the mornings galloping horses at Belmont Park before school began. During the summers, he traveled to Normandy to work for owner, breeder and trainer David Powell. While overseas, he had an opportunity to become an amateur rider.

After traveling throughout North America and Europe as a jockey, Bellocq founded the Amateur Riders Club of America with his father while attending the University of Arizona's Agriculture Racetrack Management program.

“My first job was at Garden State Park in New Jersey,” Bellocq recalled. “Then from that point it's like working for a ball club. You move with ownership changes and all that. So I've had jobs at Garden State Park; Longacres in Seattle, where I met my wife; Hollywood Park; and Santa Anita. Then fast-forward to 2000, I was offered the job to run the National HBPA.”

Bellocq served as the National HBPA's CEO for a decade before stepping into his current role as the executive director of the equine program at Bluegrass Community and Technical College (BCTC).

“Our program has been around since 2006,” he explained. “We're formerly known as the North American Racing Academy, but in the last couple of years we've purposefully shifted from being known as a riding school to more of a workforce preparation and training program for all different jobs on the racetrack. Now we've officially changed our name to BCTC Equine. We're a full service-type program and as far as I know, we're the only career and training program on a community college level of its type in the country.” 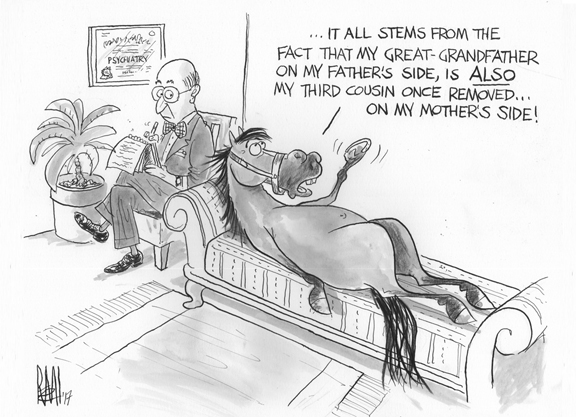 Bellocq said that as the program has grown in recent years, his role has morphed to help get the word out on what their training has to offer to the next generation in the sport.

“I kind of focus on advocacy and industry relations,” he said. “I also work on grant applications and things like that, but it's really outreach as much as anything.”

When he's not in his office at BCTC or on the ground at The Thoroughbred Center in Lexington overseeing students in training, Bellocq can be found in his home office wearing a different hat as he puts the vision for his next cartoon down on paper.

He said that readers should not expect to see the same thing from him every day. While most of his features are aimed to put a smile on the viewer's face, others may be a bit more thought-provoking.

“I'm not afraid to draw a cartoon on something that's maybe a little controversial,” he said. “But at the same time, you have to mix that up with other content, like if you see something super funny that happens on a day-to-day basis on the racetrack, you've got to do those as well. So that's the balance that I'm going to try to strike and hopefully the readers will respond.”

But in each and every piece, he said he hopes to conserve the timelessness that was often noted of his father's work.

“I admire what he did for all those years with the Morning Telegraph and Daily Racing Form because I can pull out some of his older drawings and they're still funny today. So that's what I aspire to do someday and hopefully in the TDN, I can bring a lot of laughter to folks.”

Watch for part two of our conversation with Remi Bellocq on his hand in the growth of BCTC's Equine Program.