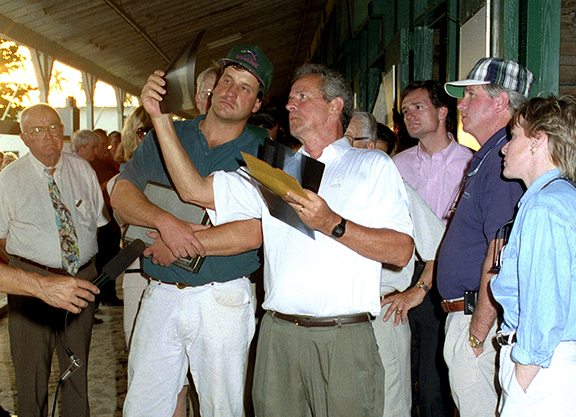 Dr. Peter Hall (R) checks the X-Ray of Holy Bull after he injured his left foreleg in the 1995 Donn H. at Gulfstream Park | EQUI-PHOTO

Tom Thornbury:
One of the best has left us. Dr. Peter Hall died quietly in his sleep earlier this week. He was a real race-tracker; a track vet in New Joisy in the summer, and Florida in the winter. He had his hands on some of the greats, and as I recall, Holy Bull was the best in his memory.

Wherever we stopped in Ocala, he knew someone there from his years on the track. With his flawless recall for directions to any farm he had previously visited, we referred to him as GPS Hall. His humor was infectious. Many times he would get to giggling, while telling a joke, that he almost couldn't get the punch-line out. I had to pull the car over more than once, because we had laughed ourselves into convulsions.

One of the all-time greats in my book; those who knew him, worked with him, and were lucky enough to learn from him, will forever cherish our time with Pete. In his honor, several of us will have an “All American” tonight. As he would tell you, “Hey, hey pally, you fill a tall glass with ice, and add two scoops of Dewar's.”

Darren Fox:
I had the pleasure of spending a summer with Dr. Hall on the Keeneland inspection team in 2008. Countless hours of fun conversation and great stories made the days go by in a blink.

His sense of humor is what is most memorable along with his great laugh. When his laugh really got going it would set the rest of us off even more so than the original joke.

I enjoyed visiting on trips to Ocala to see him and his wife Patty, their chocolate lab 'Bear Dog' and hear about their grandchildren, his golf game or his total number of miles walked for the year and see if he was on track to hit his target that year, which was usually in the 1,500 mile range. His trips down memory lane through the picture board of old photos in his garage was pure gold.

Rarely without a smile, a “hey laddie” or a glint in his eye to let you know that a funny quip or story was close at hand made every minute in his company the absolute best.

We will miss you Doc! Rest in Peace.

Ben Perkins, Sr.:
Ben Jr. and I have had the privilege of knowing Pete Hall as a vet and a friend for some thirty years. Pete was brilliant, funny, outspoken and unique. I cannot think of anyone I'd trust more with the safety and well being of our horses. I could count on Pete to tell me what he thought, whether I  liked it or not. After a long, hot summer day at Monmouth Pete would not turn down an invitation for a quick stop at Bar Bombay for a Dewar's… I was usually buying.

I will miss him at OBS in the spring where we shared stories many times retold, along with tales of Pete's escapades at his beloved home at the Villages.

Gary King:
I was very sad to hear about the passing of Dr. Peter Hall earlier this week, and would like to echo some of the sentiments expressed above.

I was lucky enough to spend time with Dr. Hall during a placement with Keeneland in the spring/summer of 2009. He was a great man for a story, a joke, and to share the knowledge he had acquired from a lifetime dedicated to caring for Thoroughbred horses.

There are some great stories about Dr. Hall, some of which are best not published, but every one of them remind me of his infectious sense of humor. He and his wife, Patty, visited Ireland in the summer of 2010, where he particularly enjoyed the traditional Irish music in Cunningham's bar in Kildare Town, while sipping on one or two Irish whiskeys. He seemed to leave a lasting impression on everyone he met, and my family still speak very fondly of him to this day.

Dr. Hall was a brilliant character, and most importantly a brilliant man. I will always cherish the time I spent with him.

If you would like to share a tribute or a story about Dr. Peter Hall for publication, please email Gary King ([email protected]).