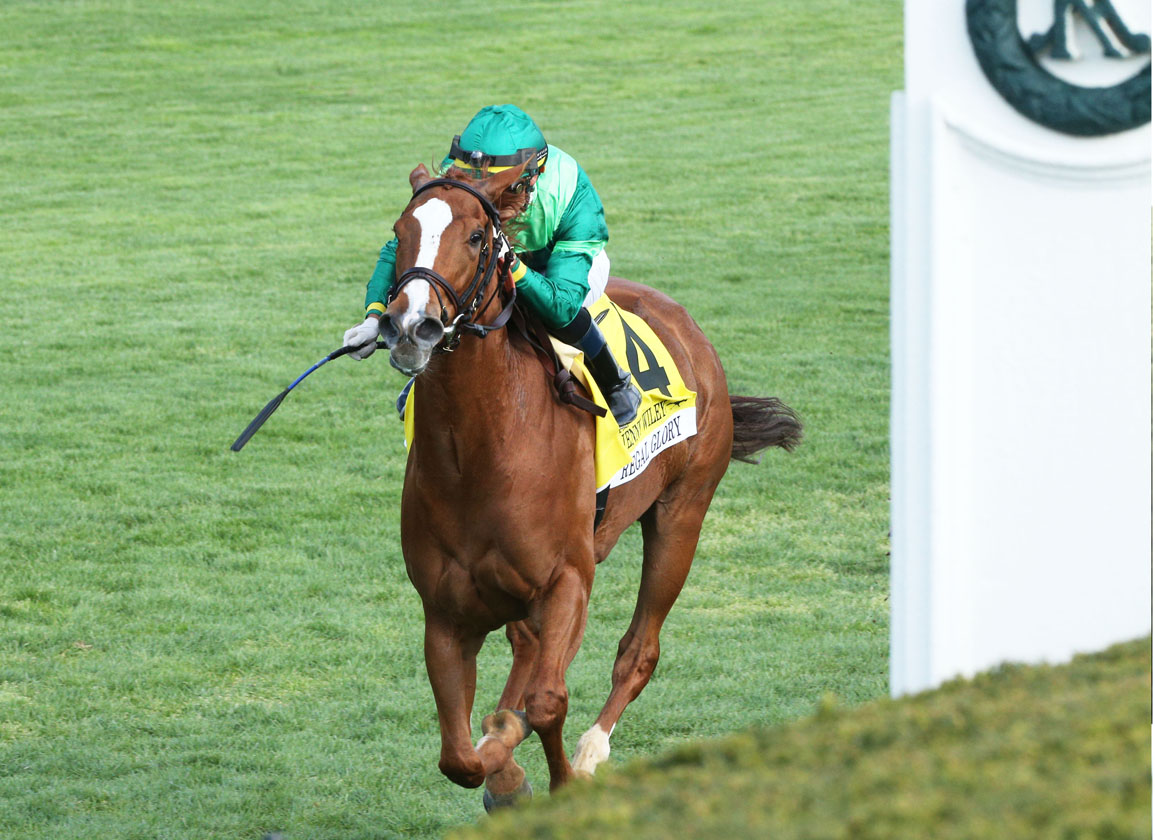 Peter Brant's 'TDN Rising Star' Regal Glory (Animal Kingdom) got the jump on stablemate Shantisara (Ire) (Coulsty {Ire}) with three-sixteenths of a mile remaining in Saturday's GI Jenny Wiley S. at Keeneland and dug in gamely to hold off her younger rival to prevail, providing trainer Chad Brown with a record fifth Jenny Wiley win, all since 2015. Brown overtook his mentor Bobby Frankel and Hall of Famer Bill Mott with the win.

“I'm a lucky guy with owners like Mr. Brant and plenty before him that have sent me a lot of nice fillies, and I had a great teacher [the late Hall of Famer trainer Bobby Frankel],” Brown said. “I just read yesterday I'm tied with Bobby's record, and I was thinking of him walking down here. I spent a few Jenny Wileys in the paddock with him when I was working for him and he taught me a lot. Luckily, I've had the horses and the team to work with these horses.”

Off a half-step slow, Regal Glory tugged Jose Ortiz up into second to press pacesetting Navratilova (Medaglia d'Oro) as Shantisara and Flavien Prat enjoyed the run of the race from a rail-skimming and joint third. Felt for three-eighths of a mile from home, Regal Glory claimed the front-runner with ease a furlong and a half out and kicked home a strong winner.

Shantisara was asked for her best in upper stretch and launched one final desperate inside bid, but fell short. 'TDN Rising Star' Lady Speightspeare (Speightstown) overcame a slow start to pick up third money.

A three-time graded winner for the late Paul Pompa, Jr., Regal Glory topped the Pompa dispersal at Keeneland January in 2021 on Brant's bid of $925,000. Dam Mary's Follies, who is also responsible for dual G1 February S. hero Cafe Pharoah (American Pharoah), was sold to the BBA Ireland for $500,000 at the same event.

“I especially want to thank Mr. Brant for not only stepping up and buying her here at Keeneland out of the dispersal for Mr. Pompa, another dear friend and client of ours,” Brown said. “It was [Brant's] call to keep her in training this year. I probably would have bred her, and he said, 'No, she's in good form and I want to see her run another year. I have a feeling this is her year,' and so far he's right.”

Brown continued, “She's extremely competitive. She knows where that wire is, and with Shantisara–that's a real horse running at her. For [Regal Glory] to hold her off and to show she can get a mile and a sixteenth twice now. It looks like she could even go a little bit farther.”

Team Valor homebred champion Animal Kingdom is truly a product of the world. By a Brazilian-bred stallion and out of a German-bred mare, he won the GI Kentucky Derby in the U.S., the G1 Dubai World Cup in the U.A.E., raced in England, and has now stood in North America, Australia, and Japan. The only continents he lacks a connection to are Africa and Antarctica.

While Animal Kingdom's first Japanese foals are just yearlings, he left 10 black-type winners and four graded winners from his North American crops. He has three Grade I winners in the U.S.: Regal Glory, Oleksandra (Aus), and Duopoly, while his Untamed Domain is a Grade II winner who was runner-up in the GI Breeders' Cup Juvenile Turf.
Both Regal Glory and Animal Kingdom's Australian multiple listed stakes winner Mystery Miss (Aus) are out of More Than Ready mares, with the pair being two of More Than Ready's 131 stakes winners out of his daughters.

Mary's Follies, a MGSW who sold at the 2021 Keeneland January sale for $500,000 to BBA Ireland while in foal to Curlin, is not only the dam of Regal Glory, but also of Japanese MG1SW Cafe Pharoah (American Pharoah) and U.S. MGSW Night Prowler (Giant's Causeway). She lost the Curlin foal she was carrying in 2021, but has the 2-year-old colt Ready to Connect (Connect), who sold at OBS March for $180,000 to Chad Schumer after working a furlong in :10.1, and a full-brother to Cafe Pharoah born Feb. 26.