Home » Archive » Europe » Redvers: 'Haziya our Best Chance but Mangoustine the one we Want Most'

Redvers: 'Haziya our Best Chance but Mangoustine the one we Want Most' 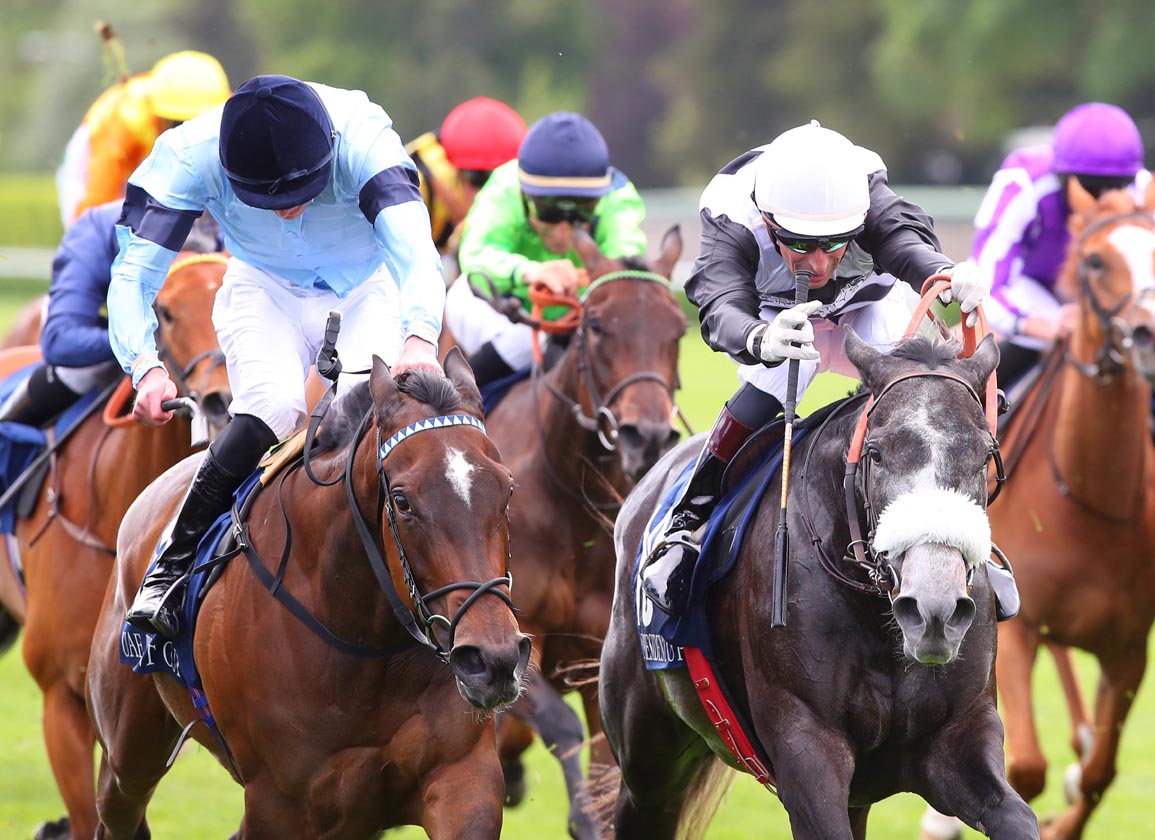 Mangoustine carried former NBA star Tony Parker's black and white silks to victory in the G1 Poule d'Essai des Pouliches at ParisLongchamp last month and Redvers, who bought the filly as a yearling for just €46,000, is looking forward to seeing how she performs later in the week.

Along with Parker, the Mikel Delzangles-trained Mangoustine is owned by Monceaux Stud and Qatar Racing and, despite being available at odds as big as 10-1, she is expected to put up a bold show in what is shaping up to be one of the races of the week.

Redvers said, “It could be one of the races of the week. If the ground gets very quick, perhaps it will cut up a little, as there is a lot of talk that the Irish Guineas winner [Homeless Songs (Ire) (Frankel {GB})] won't run if the ground is too fast. It's a hell of a contest.”

He added, “We bought Zotilla (Zamindar), the dam of Mangoustine, in partnership with Lordship Stud and Monceaux at the Arqana December Sale in 2014. She was a lovely mare, very athletic, and possibly a little bit hot temperment-wise, but she had the most amazing action.

“We then sold her because Henri [Bozo]'s model for Monceaux is a good one in that, if they [mares] are not producing winners, he just outs them. That's why Zotilla was sold.

“But this filly [Mangoustine] was an absolute beauty and we decided to buy her back up to a certain level because we had to buy out Lordship Stud who weren't interested in racing her.

“We bought out Lordship and Henri made a deal with [trainer] Frederic Rossi. Shortly after that, it was decided to bring in Tony Parker as a partner, because the filly was so nice and everyone is so keen for his operation to have a good horse. It all worked quite well.”

To say it has worked well is an understatement. Parker, one of the most successful basketball players of the modern era, brings a new fanbase to the sport and the decision to put him into Mangoustine has proved an inspired one.

Redvers said, “It's been great. Nobody can ever imagine the way these things will work out and we'd all be lying if we knew we were steering Tony into a Guineas winner. We knew she was a lovely filly with a proper pedigree and by a proper sire. She's a hugely exciting race filly and equally exciting broodmare prospect.”

Moungoustine was moved to Mikel Delzangles earlier this year after her previous trainer, Frederic Rossi, lost his licence. Delzangles, best known in Britain for his exploits with G1 2000 Guineas winner Makfi (GB) (Dubawi {Ire}), endured a period in the wilderness but Mangoustine's Guineas win represented a new dawn for the yard.

Redvers said, “It's well documented that Frederic lost his licence and we needed to find another trainer. Luckily, everyone agreed on Mikel, as he had done an amazing job for us in the past so luckily it has all come full circle.

“By his own admission, he was in the doldrums for a little while, but it's fantastic to see him back. Not only is he a master trainer, he's also a complete gentleman, and we really felt for him during the period when his horses weren't terribly healthy.”

He added, “Whatever problem held them back before, they seem to be over that, and it's great to see Mikel back to his glory days. It's wonderful to see all of his horses running well again and we're looking forward to Mangoustine this week.”

Mangoustine may be the one that matters most but, according to Redvers, the Joseph O'Brien-trained Haziya is Qatar Racing's best chance of a winner this week.

He said, “We were looking at horses who had serious chances in some of the races and she stood out. I've got to say, she was a shrewd acquisition by Joseph in November [cost just €36,000 at Goffs] so hopefully she might win. She is probably our best chance of a winner for the entire week.”

On the rest of their team, Redvers said, “Emotion (GB) (Frankel {GB}) runs in the G2 Queen's Vase. She's a homebred who won by half the track at Kempton. She got found slightly wanting at Goodwood, where she didn't really handle the conditions, but Ascot will play to her strengths.

“We're partners in Silencer (Ire) (Kessaar {Ire}), who is a breeze-up horse we bought with James Harron. Hopefully he'll be able to give the Australians a bit of fun in the Windsor Castle. Friday is really our big day with Mangoustine. She's the one we're all really excited about.”