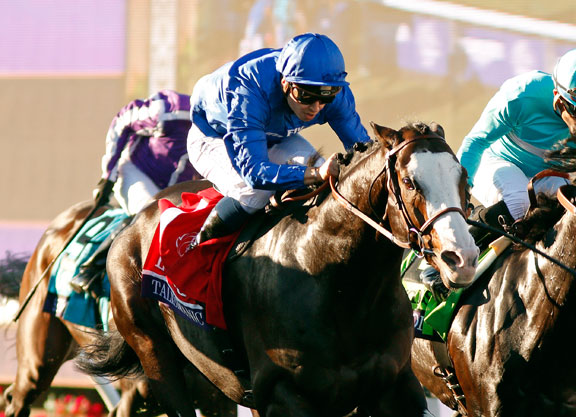 Josh Christian’s coffee maker is in for further heavy use next November with the large and successful overseas Breeders’ Cup contingent likely to be followed by another one in 2018.

“I learned this year that the more we get, the less sleep I get,” he explains a little sheepishly. “It was two or three hours per night this time, there’s that many people coming over here.”

It is Christian’s duty as senior director of racing to recruit likely European challengers and to make sure they are satisfied. The role–“I kind of shake hands and kiss babies”–led to the biggest raiding party in the meeting’s history heading to the first-time venue of Del Mar.

“Obviously we offer $28-million in prize money but there’s a lot of competition out there,” he says. “You never want the wrong kind of horse–nine times out of 10 we want horses that want top of the ground. With soft ground horses, that’s not what would be successful over the time.”

“We had a huge number; technically the way we file them up it was 38 internationally campaigned horses. There were three winners, two seconds and two thirds but the most important thing to me is that even the people who had a horse who didn’t run too well could look at me and say, ‘man we had a blast,’ and, ‘we’ll be back.'”

The winners came from likely sources–Andre Fabre’s Talismanic (GB) (Medaglia d’Oro) in the GI Longines Breeders’ Cup Turf and another for Godolphin with Wuheida (GB) (Dubawi {Ire}) in the GI Filly & Mare Turf, while Mendelssohn (Scat Daddy) had struck yet another blow for Aidan O’Brien in the Juvenile Turf.

Christian has developed a close friendship with Hugo Palmer and George Scott, persuading them to bring Home Of The Brave (Ire) (Starspangledbanner {Aus} and James Garfield (Ire) (Exceed And Excel {Aus}) for the Mile and Juvenile Turf, respectively, whilst being able to make acquaintance with other newcomers such as Archie Watson, Richard Spencer and a certain Sir Mark Prescott.

“There were a lot of young faces–three young guys and one very epic older guy. Getting Sir Mark took a lot of work between [Elite Racing Club manager] Dan Downie and myself but to have him bring a horse along, I couldn’t stop smiling. Dan and I pretty much decided Marsha (Ire) (Acclamation {GB}) was coming for the Turf Sprint a few weeks after the Nunthorpe when we were in a club in the bottom of a basement club in London. At that point Sir Mark didn’t know that but I showed him the different stats and how she would do, that she’d get her ground. Then she ran a good race in France even though she didn’t get her ground, she came out of it well enough to come. Sir Mark didn’t spend a lot of time here but he had fun.”

“What I liked really is that everyone who I had good dealings with left wanting to come back,” he adds. “We got Richard Spencer on the TV cameras, Dan Downie on NBC; it means so much to those guys to get their faces out around this country. No-one would have ever thought Gordon Elliott would have had a 2-year-old horse at the Breeders Cup, and Beckford (GB) (Bated Breath {GB} ran a blinder to finish fifth.”

“He was one of the important ones to me last year,” Christian explains. “I’ve always had a good relationship with [trainer] David O’ Meara and [owner’s racing manager] Joe Foley. After years of Joe and I kind of tongue-in-cheek arguing about American racing, he finally comes and Suedois scratches. I was gutted for them, they were so excited, but I saw them on the Saturday last year and they said they would be back. They were honest, he came back this year and was fourth in the Mile.”

Christian even had to turn celebrity saviour in locating actor and comedian Jack Whitehall, who is a friend of Scott.

“Something happened, the car maybe dropped them off in the wrong place, but I got a kind of frantic call right before George’s race, right as they were going into the parade ring. It’s Jack Whitehall saying ‘hey, how do we get in, we want to see the race.”

“They didn’t have their tickets or credentials yet so I had to run thorough the crowd, grab them and bring them back in. It was a kind of navy seal, rush in, rush out kind of deal. I think I may have run a few old people over but it worked out great in the end.”

Attentions of the Breeders’ Cup executive have already turned to next year. Christian expects the ‘win and you’re in’ races to remain “largely the same” although the formal meetings have not yet taken place. There is excitement at returning to his home state of Kentucky.

“We’re at Churchill Downs and Europeans have had a great record there,” he says. “It’s about getting them in that mode of Kentucky rather than Southern California. Many of them have never been there but Churchill has really evolved and Louisville is a pretty cool town nowadays. Hopefully they have the right horses.”

Christian says the old cliche of Europeans faring far better on the East Coast is over, though.

“It’s crazy, if you look at the top three records of purses won over all-time they’re all on the West Coast and this year internationally-based horses won over $7-million. That’s a huge amount. The world’s getting smaller, it’s getting easier to ship horses, and we have good relationships with the likes of the International Racing Bureau, which facilitates everything.”

In line with its billing as racing’s world championships, the Breeders’ Cup is still missing some notable members. Aside from his stints in Britain, Christian has close ties with South Africa and in particular the Slack family, racing royalty and owners of top mare Smart Call (SAf) (Ideal World). Unfortunately, attempts to change the country’s lengthy quarantine laws have been hampered by red tape.

“We got so close with Variety Club (SAf) (Var) and Smart Call in two different years,” he says. “We’re still working with them on trying to ease the quarantine, which is a bit ridiculous. I still believe those horses are suited by our racing, the tighter tracks and quicker surfaces. I know if we could get them here, they would prove it. What I would have given to see Variety Club go against Wise Dan (Wiseman’s Ferry).”

“It’s tough to get them out of some countries because the money is so good,” he adds. “To get an Australian horse to the Breeders’ Cup, just the logistics of shipping them there is pretty difficult. We normally do have a Hong Kong or a Japanese horse, we didn’t this year, but we had Cotai Glory (GB) (Exceed And Excel {Aus}) who was owned by some very influential Hong Kong owners and they had a blast. Let’s hope we get one next year, we’ll work hard on that.”

Otherwise, though, Christian and his team can reflect upon a job well done.

“I’d have never thought we’d have the first three in the Nunthorpe, first and third in the King’s Stand, the Opera winner, Pretty Polly winner, the Sun Chariot, the Rothschild, Falmouth, the Coventry, the top two from the Dewhurst; it’s amazing to be able to say it. We find the hotel rooms, pick people up at airports and so on. Its like Tim Gredley [James Garfield’s joint-owner] said to me ‘I don’t know how you all do it because you treat us all like we’re family.’ Once you do that, hopefully people come.”