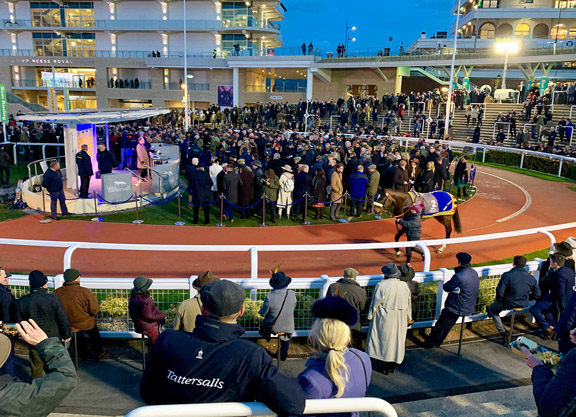 CHELTENHAM, UK—With the popularity and profile of National Hunt racemares rising steadily, so too are the prices in the sales ring and a new record for a jumping mare in training was set on Thursday evening at the Tattersalls Cheltenham Festival Sale when maiden point-to-point winner My Whirlwind (Ire) sold for £400,000.

Auctioned as Lot 9, the 4-year-old daughter of Stowaway {GB}) hails from the family of Grade 1-winning hurdler Mister Morose (Ire) and clearly made quite an impression on her winning debut just 11 days before the sale. Consigned by Patrick Turley, who bought her for €42,000 at last year's Tattersalls Ireland Derby Sale, she will now be trained by Nicky Henderson. Tattersalls Ireland CEO Matt Mitchell was on the telephone as he placed bids from the parade ring and later confirmed that My Whirlwind had been bought on behalf of a “well established owner”.

Top of the geldings was Lot 12, Bravemansgame (Fr) (Brave Mansonnien {Fr}), a graduate of Donnchadh Doyle's Monbeg Stables who timed his first win to perfection last Sunday, scoring by eight lengths over three miles on debut at Killinick. Tom Malone, standing with trainer Paul Nicholls, went to £370,000 to secure the 4-year-old.

“He's for Paul,” Malone confirmed. “I saw him as a store then again at Donnchadh's in January. He tore the field apart when he won and at 16.3hh not many horses could do that at his age.”

Gordon Elliott will take over the training of Lot 22, Farouk d'Alene (Fr) (Racinger {Fr}), an 18-length winner on Sunday at Belclare point-to-point who provided another decent return for Monbeg Stables when Mags O'Toole signed the docket at £260,000.

Matt Coleman, buying with trainer Venetia Williams, signed for two of the higher prices of the evening, including recent Newcastle bumper winner Crypto (Ire) (Gold Well {GB}) (Lot 23) at £200,000, and Hold That Taught (GB), by leading British National Hunt sire Kayf Tara (GB) (Lot 19) for £220,000. Hold That Taught was another youngster to have scored on Sunday, for Denis Murphy of Ballyboy Stables. The 4-year-old's 10-length winning debut at Turtulla came a day after the Sandown hurdles victory of fellow 4-year-old Le Milos (GB) (Shirocco {Ger}), who is out of Hold That Taught's half-sister Banjaxed Girl (GB) (King's Theatre {Ire}), herself an eight-time winner, including two listed victories over hurdles.