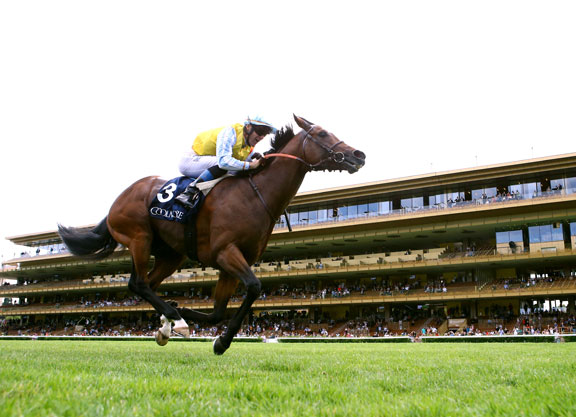 MG1SW Recoletos (Fr) (Whipper–Highphar {Fr}, by Highest Honor {Fr}) will stand at Haras du Quesnay in 2019, the stud announced via Twitter on Monday morning. A homebred for Sarl Darpat France, the Carlos Laffon-Parias trainee will stand for €8,000. A winner of the G2 Prix Greffulhe and G3 Prix du Prince d'Orange as a sophomore, the bay also placed third in the G1 QIPCO Prix du Jockey Club. Kept in training this year, Recoletos was first past the post in the G2 Prix du Muguet at Saint-Cloud in May, and added the G1 Prix d'Ispahan in good style at ParisLongchamp at the end of the month. Only 2 1/2 lengths behind MG1SW Alpha Centauri (Ire) (Mastercraftsman {Ire}) in the G1 Prix du Haras de Fresnay-Le-Buffard Jacques Le Marois two starts later, the 4-year-old padded his resume with a win in the G1 Prix du Moulin de Longchamp on Sept. 9. The proven miler's record stands at 14-7-1-1 with $1,299,755 in earnings.