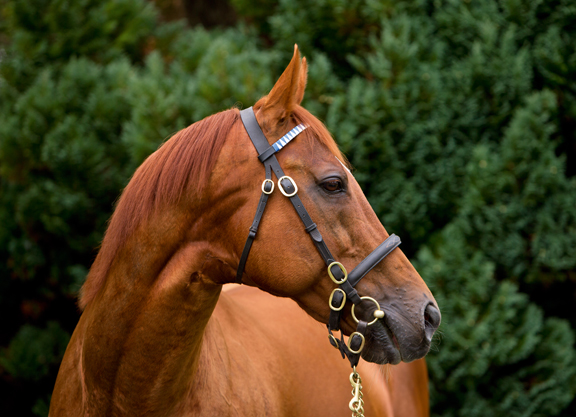 Finding value amongst established sires in the lower-to-middle regions of the market is a tricky business. There are plenty of sires available to breeders that have produced enough talented runners to survive the harsh examination that every sire faces in their first five years at stud, but those that do so whilst not really taking off in commercial terms can often find their stock falling into the dreaded “proven but unfashionable” bracket.

Breeders that use such sires may avail of value in terms of the nomination fee they pay and derive long-term benefit when the resulting offspring goes on to win on the track, but from the all-important short-term financial perspective, progeny of such sires are often a tough sell at the foal and yearling sales compared to unproven first-season sires. Of course, this doesn't make much sense, but it is the long-established reality of this game of ours.

However, for all that the above tends to be the rule, there are exceptions to be found. Namely, sires whose progeny are high achievers on the racecourse and in the sales ring without their nomination fee having gone through the roof. Such sires often need a bit of explaining and their cases are not always obvious or well known, but delving beneath the surface can reveal valuable truths. One sire that very much fits this bill is Raven's Pass.

The GI Breeders' Cup Classic winner stands at Kildangan Stud in Kildare for €12,000 this year, which is notably lower than the €40,000 he commanded on retirement in 2009. This drop in fee alone will be interpreted negatively be many, but the one of the main reasons for it has little to do with what his progeny have achieved on the racecourse or in the sales ring; it is that he is afflicted with low libido. While his fertility is excellent, he is only content to cover mares at his leisure and this has resulted in Darley restricting him to covering just 70 mares a season. As a result, his crop sizes have been very low for a sire of his profile throughout his career, with his live-foal statistics being as follows: 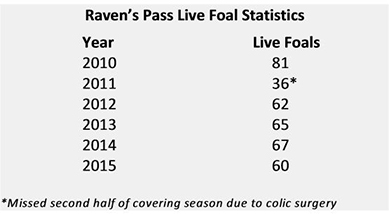 It is when one takes this highly-significant set of facts into consideration and begins to analyse the achievements of Raven's Pass on a foal-for-foal basis that his merits as a sire become much clearer.

Despite having just 244 foals in his first four crops, the youngest of which are now 4-year-olds, up to the end of 2016 Raven's Pass had produced 56 horses (23%) that have achieved Racing Post Ratings of 90 or more. That is a percentage that has only been bested by a select group of top stallions in recent times. For the sake of comparison, it is a higher percentage than was achieved by the first four crops of the highly-successful and high-profile stallions that retired at a similar time to him in Dutch Art (GB) (21.4%) and New Approach (Ire) (22.6%).

This statistic reflects very well on the ability of Raven's Pass as a sire, but it is one that not everyone is likely to be fully aware of, such is the uphill battle he faces for attention against rival sires that produce far greater quantities of progeny each year. As well as that, while he has consistently sired talented runners, Raven's Pass has yet to sire a real star to put his name up in lights, with him being unfortunate that his two best 2-year-olds, Steeler (Ire) and Richard Pankhurst (GB), missed out on their chance to run in the Classics due to suspension and injury, respectively.

Just as important a part of the equation for a commercial breeder when weighing up the merits of a sire is how their progeny perform in the sales ring. While a lack of numbers has perhaps held Raven's Pass back from getting the widespread credit he deserves as a sire, ironically it has almost certainly been a help to him in the sales ring, with the small supply of his progeny at the yearling sales having resulted in high demand for them over the years. Approximately half of each of his foal crops have been offered as yearlings each year and the average/median prices they have achieved have been impressive.

While one will notice that his yearling sale numbers took a turn for the worse last year, this can perhaps be explained by a fact that ironically may ultimately prove to be what brings him back into mainstream focus. In 2013 he covered his highest-quality book of mares since his first season and with them having achieved excellent sale results as yearlings, many observers were likely to have been focused on the performance of that crop as 2-year-olds last year as his last big chance. While there was some promise amongst them, a star failed to emerge from the group by the time the yearling sales came around, which perhaps explains the downturn in his stats.

However, that same crop has made a very fast start to this season as 3-year-olds and the star that Raven's Pass needs could well be amongst them.

Over in France, the Andre Fabre-trained Via Ravenna (Ire) has looked a live Classic prospect in winning both her starts this season including the G3 Prix Imprudence at Maisons-Laffitte. She will reportedly be targeted at the G1 Poule d'Essai des Pouliches at Deauville next month. As well as that, earlier this week Henri-Alex Pantall introduced Midnight Fair (Ire), a filly by Raven's Pass out of G1 Irish 1000 Guineas winner Nightime (Ire) that realised 450,000gns as a yearling, to make her debut at Cholet and she overcame a slow start to win by no less than eight lengths and earn 'TDN Rising Star' status.

In Ireland, the Raven's Pass filly out of Spirit Of Tara that realised a sale-topping €2-million at the Goffs Orby Sale and is now called Tocco D'Amore (Ire) made a highly-impressive winning debut for Dermot Weld at Naas, also earning the 'TDN Rising Star' tag, and looks a sure-fire stakes winner in the making.

Meanwhile in England, Simon Crisford has saddled Flashy Snapper (GB) and Eagle Creek (Ire) to win maiden races by 11 lengths and six lengths, respectively. There will also be expectations attached to the reappearance of two of the more promising juvenile performers by Raven's Pass from last year, the Luca Cumani-trained Gorgeous Noora (Ire) and the Charlie Appleby-trained Wild Tempest (GB).

His older horses are stepping up too, as in Australia the Darren Weir-trained five-year-old Big Duke (Ire) has been showing notable progression in recent months, looking a potential Group 1 winner in emerging on top in two Group 3 contests and a Group 2. Big Duke lines up in Saturday's A$2-million G1 Sydney Cup.

While it has been a slow-burning project, recent evidence would suggest Raven's Pass will this year have his best opportunities to establish a star to represent his stallion career after years of punching above his weight in terms of producing RPR90+ horses. Having dropped to his lowest nomination fee of his career, he represents value for breeders in search of a proven sire at that end of the market.