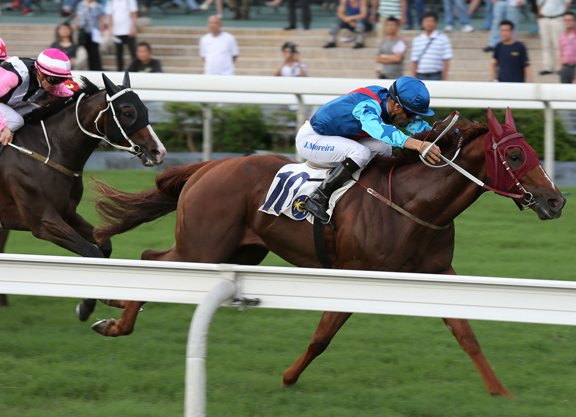 Rapper Dragon (Aus) (Street Boss), whose rapid progression during the 2015-2016 season was capped by a barnstorming victory over more experienced rivals in stakes company last May, will be forced to miss a projected engagement in the G1 Longines Hong Kong Cup Dec. 11 and will instead focus on a preparation towards the 4-year-old Classics, South China Morning Post reports.

Group 1-placed at two in Australia while under the care of Gai Waterhouse, Rapper Dragon won four of his final five starts last season, capped by a convincing 1 1/4-length defeat of the reliable miler Beauty Only (Ire) (Holy Roman Emperor {Ire}) while in receipt of 16 pounds in the Lion Rock Trophy H. (video) before calling it a season. The chestnut was to resume in the G2 Sha Tin Trophy H. Oct. 23, but was scratched lame and was to prep for the Hong Kong Cup in Sunday's G2 BOCHK Jockey Club Cup. But those plans have been scuppered owing to a foot ailment.

“It's just some bruising of the foot, the same foot as before,” trainer John Moore told SCMP. “It's a nuisance that we couldn't get him to international day, but now we just go back to our original plan, and that is next year's Derby.”