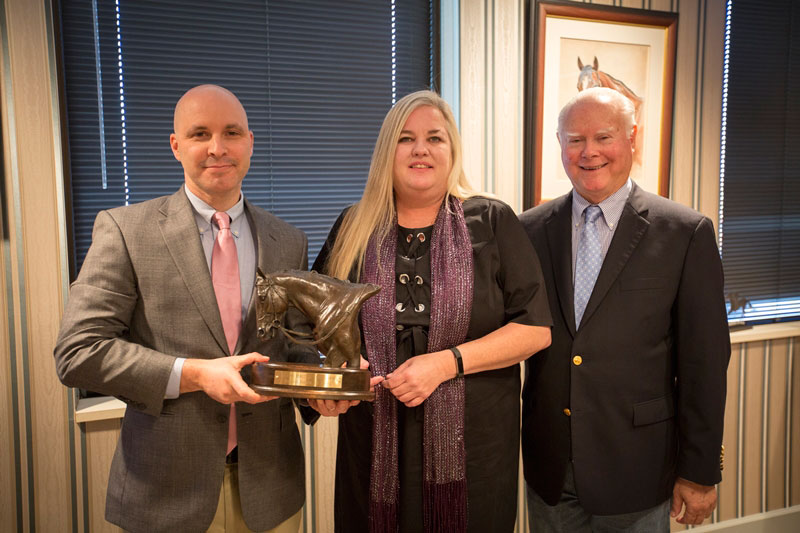 Margaret Ransom, who penned a story for the off-shore betting website USRacing.com that revealed dire conditions for over three dozen horses on a Kentucky farm that ultimately led to charges against trainer Maria Borell and her father Chuck Borell, has won the Stan Bergstein Writing Award and a $25,000 first prize.

“Margaret exposed a problem and led to action, which is what this award is all about, so she deserves credit and recognition for her work,” commented Barry Irwin, the CEO of Team Valor, who sponsors the award.
As a result of the Ransom story, outside horsemen and equine retirement groups came to the aid of the horses, while an investigation from the Kentucky Department of Agriculture, led to charges against the Borells. Chuck Borell pleaded guilty to charges in September. Maria Borell, who oversaw most of the training in 2015 of champion Runhappy (Super Saver), was also charged with 43 counts of animal cruelty. The horses were seized and volunteers and retirement farms stepped up to the plate.

Stories are submitted over the course of the year to Team Valor and a panel of judges, including Trevor Denman, Hall of Fame jockey Chris McCarron and turf writers Neil Milbert, Maryjean Wall and Michael Veitch were this year's judges.

“The initial reaction of many following the firing of Maria Borell was to come to her defense,” offered Wall, herself a Pulitzer Prize nominee and three-time Media Eclipse Award winner for the Lexington Herald-Leader. “However, Margaret Ransom's thorough research revealed there was much, much more to this story than the popular press initially reported. The article took a trending news item and went after the unanswered questions. While all entries did a good job taking readers beyond the obvious, this one dealt with a topic of intense emotional interest to an audience exceeding the bounds of racing insiders, and did so in a reader-friendly way.”

The TDN's Lucas Marquardt was the recipient of the 2014 Bergstein Award for his piece entitled “Is This the Death of Synthetic Racing? And If So, Why?”